The State of Things II: Hauberg Estate Mansion and Gardens 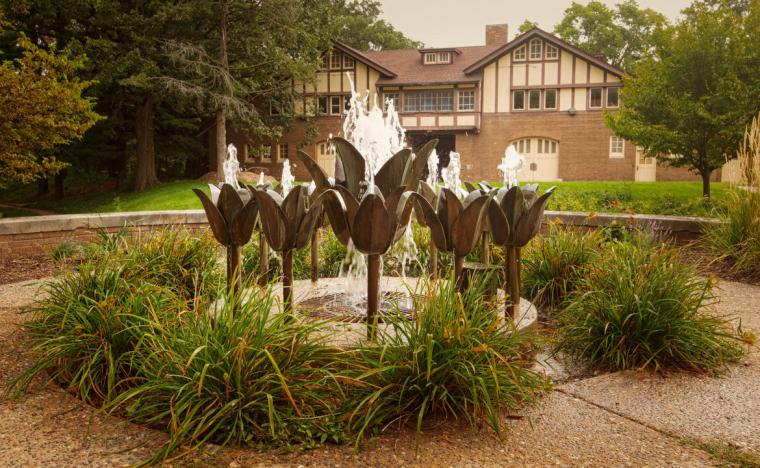 Deb Kuntzi, executive director of the Hauberg Estate Mansion and Gardens in Rock Island, discusses the venue's operations during this period of social distancing. We previously spoke on May 19, and again on Thursday, August 27.

You know, we're working on the whole Jens Jensen design for the estate [renovation], and it takes a lot to reconstruct things. But we have original blueprints from Jens Jensen from 1908, back when he brought the property. And it's kind of a paint-by-number, because it is so detailed with every plant that he used and every tree that he used and every bush that he planted. But we know exactly where they go.

We're mostly not changing the bushes and the trees. He did have, like, a barberry shrub, and the barberry can be very invasive now, so we decided not to use that. We used some different varieties of bush that aren't as invasive and don't get as tall, so it's actually better.

But particularly with the flowers – the perennials and some of those old rose bushes and bulbs – you can still get everything. That was one beautiful thing about Jens Jensen: He did all prairie, and all native, and natives are hot right now – everyone wants native plants. And those varieties are just beautiful. We have hollyhocks that bloom from June to October here. Everything that was in Jens Jensen's original design, we can still buy.

There's also big news on our lower pond. We have five ponds, and the lower pond has been a problem for the Broadway Historic Neighborhood for a while because of run-off and there being no overflow system to take care of it – to go into a city-water drainpipe. So we've been working with a gentleman who does a lot of ecological work and is very well-respected in the community, and the city has hired him to work on the lower pond, which should be beautiful in about two months. The city has also agreed to put in our ADA bathrooms in the Carriage House, which is huge for us.

And we acquired the Villa Arch that was at the entrance of the Villa de Chantal in Rock Island before it burned down [in 2005]. This arch has been in storage for 10 years, and it's incredibly beautiful, and we're going to put it in this wooded area on the south side where we have a lot of weddings.

So we have a lot of things going on, and the city has really stepped up in helping us do things, because it's going to benefit the entire community. It truly is. This place is a little jewel, and it just needs to be shown, and it's been neglected for a long time.

We decided to do architectural tours outside [Thursdays at 7 p.m.], which has been something a little different for us, and gives us the chance to have a few more people visit the estate. And starting in September, we're going to be doing Jens Jensen tours outside, as well. But we can have people inside again now, and we're doing the mansion tours on Fridays at one o'clock. We're still careful with how many tours we have, though, and how many people attend them. We don't want to get too big a group.

We really aren't planning a whole lot of big things right now. We were gonna do an Oktoberfest and a vintage football game in partnership with German American Heritage Center, but that's not happening. That would've accumulated too many people and we just don't feel that it's safe, and I know that even the vintage football game at Douglas Park has been canceled. But that's okay. We'll do it next year.

But we have had a few things like Tipsy Art, which is actually kind of nice – eight to 10 people who sit in a room and paint. We partnered with the Girl Scouts, and they're going to be doing a fair-type thing to sign kids up and we'll have a scavenger hunt outside for them. I've also been booking quite a few weddings for next year, and we have a few receptions in September and October, and two vow renewals in December. Smaller things are good.

But you know, we're limited to 100 outside and 50 inside, and everyone has to wear masks inside, and some people aren't comfortable with that. We've been adapting, but … . Whoo. (Laughs.) It's challenging, to say the least.

You just get all sorts of people, you know? Even though I have a sign on the door that says “Wear your masks when you come in the mansion,” some people just … . You know, I sometimes have whole families walking in without masks. And I'm like “Please put a mask on,” and they look at me like I'm crazy. It's just maddening. And it's nerve-racking. It's very nerve-racking. You just feel like you're policing all the time.

But I'm glad people can have their events here, and with most of the receptions and weddings and things we've had, people have been very conscientious. I just tell them my goal is to not have anyone sick – I don't want to be “that place,” you know? (Laughs.) And they understand. They don't always like it, but who does? We've had some pretty disappointed and frustrated brides, and I get it. I just tell them, “It's not your fault, it's not my fault … it's just what we have to do to keep everyone safe.”

And luckily, everybody that's been here has been fine. We have all of our disinfectant stations, and we have all our masks, and the bartenders are all versed on what we need to do, and we're constantly disinfecting and sanitizing. I think we're doing the best that we can do in a bad situation. I really do.

Our volunteer base has gone down a lot because of the pandemic, but that's true for everyone. I mean, all non-profits are hurting right now. It's not easy for any non-profit. But the community always seems to come through. I'm very community-based, and I truly believe in our community because they helped save this place.

The Alleman [High School] kids have actually come through all summer. They have to have 50 volunteer hours per year, and so they've helped us a lot with cleaning up the grounds and doing yardwork and things like that. And we've got this guy who comes over – Mr. Smith – he comes over and he's edging all of our sidewalks. He said to me one day, “I want to help.” And I said, “Okay, what do you want to do?” And he was like, “Do you need help with, like, edging?” And I said, “Sure.” (Laughs.) That guy has got to be in his 70s, and he will come out here and stay for five or six hours. It's wonderful.

And I just got the sweetest e-mail from my friend Molly – she's been here since day one – and her sister, and her entry into the e-mail was, “What can we do to help? We haven't forgotten about you!” (Laughs.) People can always help, and they can help whenever they want. We don't push our volunteers. It's on their time when they want to come and help, and we've had a great response with that. They can work outdoors, and they can help clean … . And I am going to get another person to stand at the door and be the mask police. (Laughs.) My house, my rules, you know?