The State of Things: Adler Theatre 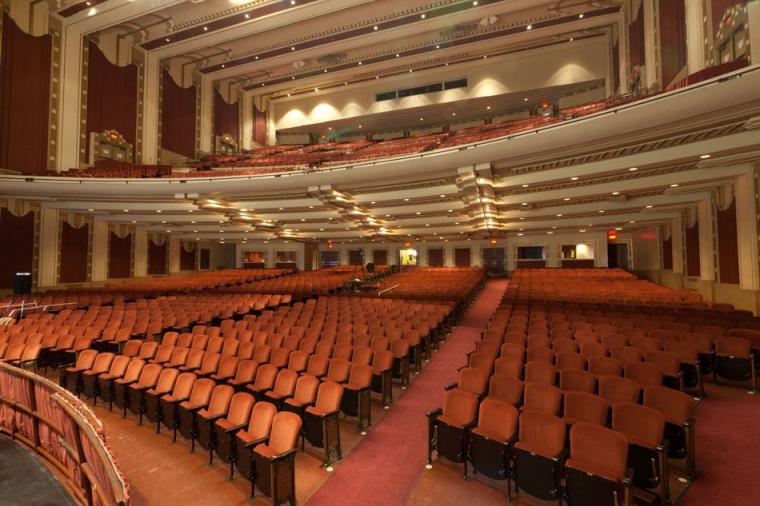 Rick Palmer, executive director of the Adler Theatre and RiverCenter in Davenport, discusses the venues' operations during this period of social distancing. We spoke on Thursday, August 27.

Our last show was Dancing with the Stars on March 12. And then the cancellations pretty much happened all at once in that mid-March weekend when the country basically shut down and quarantined itself. But before that, our shows in February and March didn't perform as well as they normally would have, either. So there was an effect [from COVID-19] going on even before the cancellations.

We had no clue, for sure, when we'd be back. When we started re-scheduling, we started looking at September, and we actually missed that because we won't be doing those September shows [including concerts with Kanas and Tenacious D, a Napolean Dynamite screening, and an evening with “Long Island Medium” Theresa Caputo]. Most of those shows are staying on the books, though. The seats that people purchased are still good, and obviously, if they can't make the new date, they're certainly able to get a refund. Most of those shows are now happening in January and later in the year.

But that doesn't mean our fall calendar is empty. In fact, today, the RiverCenter is hosting corporate meetings up in their tributary rooms. We have a wedding this weekend. We're also hosting the Iowa courts this fall for jury-duty selection. Because the numbers of people that they have to call to the courthouse on Mondays for jury duty are just too large to socially distance, the county and city got together and asked us, “Can you help? You got the space?” We have the space. (Laughs.) And it's something to help keep the community moving and get the court system going again.

We also have a two-night MMA event on September 11 and 12 [Caged Aggression XXVII: Return of the Champions[ that we lost that weekend that everything shut down, which is a huge event for the RiverCenter. So things are starting to move. We're looking at the glass half full and seeing the movement.

I think for the Adler, it's gonna take a little longer. We do have the Quad City Symphony kicking off their Masterworks series on Saturday night and Sunday [October 3 and 4]. We'll be hosting both, though I'm sure they'll try to get across the river again [for Sunday concerts at Augustana College's Centennial Hall] as things get back to normal. And besides the Masterworks, we do have a Beatles vs. Stones show [on October 20] that is on sale now, and capacity in the theatre for that is 607 seats – when normally we're at 2,411 for full capacity.

That number changes things. You know, we've got to go with acts that don't require as much production – that aren't necessarily expecting the kind of guarantees [for turnout] that most of the talent we produce expects. So we're looking at some other shows to bring in yet this fall that make sense at that number. But unfortunately, most of the acts that have happened in the past just require much better numbers than that 607, and until the social-distancing requirements change, it's gonna be hard to bring some of those acts back.

I mean, this is like the third or fourth time we've had to reschedule Gordon Lightfoot [most recently scheduled for October 5]. He had his own personal health issues, and then we tried to move the date and he wasn't well enough yet, and then we moved it into COVID. (Laughs.) So now we have to move it out of COVID. But he still wants to play. And that's the indication that I'm getting from everyone. There are a lot of very talented artists out there that want to get back to work, and looking forward to that possibility.

At best, I think we'll see Broadway at the Adler return in March. You know, it's such a complicated production. You're bringing in a New York show with 30 to 40 cast members, lots of stagehands, and you're doing it for a day. (Laughs.) Not six months; not eight months. But they're hoping, with the indications we're seeing, that things will change. I think we all believe that. And they're anticipating that by March, they'll be able to get out and tour again.

You know, we've all got to cross our fingers and see what happens this fall. How we do on the mitigation. And our facility might not be doing a lot of events right now, but we're fighting to keep the budget down and under control. We were fortunate, as a private company, to receive some PP loans, so we were able to keep staff hired all the way through June. Unfortunately, after that, some full-time staff were put on furlough and two, and the rest of us have taken pay cuts to help get through this, and help get the city through this.

Obviously, operations-wise, we haven't made budget this year. But it hasn't been as terrible as one might've thought: One, because of the loans, and two, because we reacted immediately and took measures to minimize the impact of all these events being moved around. And sponsors are still supporting us. I mean, people get it.

We've got a great staff here, and all of my department directors have been working hard to take the compliance regulations and put them into an effective, actionable plan. So we've been working hard at that and working hard at re-scheduling, and keeping busy with our patrons with communication and refunding and all those other things. But I know we'll all be happy when we can get back to some sort of normal. In the meantime, we're hanging in there.

For the Masterworks, masks will be required, and they're going to require them throughout the production. More than likely, there'll be no concessions in the theatre for the symphony, though we will still have concessions for other events. And whether it's a private dinner or something like MMA, it [masks] will be a requirement.

Whether you believe in it or not, it's the right thing to do. We're going to be cautious and try to be part of the solution. And because of that, masks will be required when you come in, and when you go up to the concession stands, and when you use the restroom facilities. But once you get to your seat, like with the MMA event, you're welcome to remove your mask and enjoy a beverage.

We're selling those seats in pods of 10, where you put 10 people together that all know that they're with each other – families and close friends and whatnot. We'll leave that to them to monitor who's in their pod. But obviously, that helps with the capacities [for events], because if we tried to do seating only in groups of two while keeping everybody six feet away from each other … ! (Laughs.) It'd never work.

We take temperatures for our employees and make sure they're healthy before they punch in. For the patrons, we won't be taking temperatures. Obviously, we're trusting them on that, but we're also asking people to wear the masks, and we'll obviously monitor if somebody there seems to be sick.

People can be assured that our facilities are going to be very clean. We bought those electrostatic foggers that we can disinfect large large areas with, so everything will always be disinfected. Of course, there's no guarantee in this, and people will have to assume their own responsibilities in how they deal with it. But with the mask requirements, and with us monitoring our staff, it's as safe as it can be. And obviously, if anybody doesn't feel well, they need to stay home. (Laughs.) Please please stay home.