The State of Things: The Grape Life Wine Store & Lounge 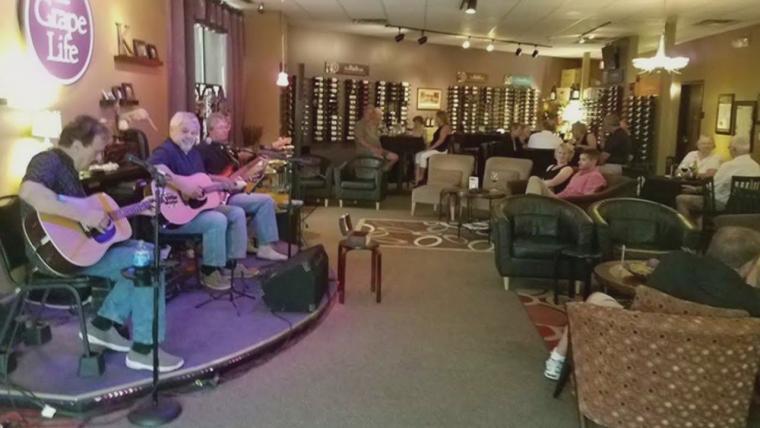 Kevin Koster, co-owner (with wife Diane) of the Grape Life Wine Store & Lounge in Davenport, discusses the live music venue's operations during this period of social distancing. We spoke on Thursday, July 2.

We've been open ever since [mid-March]. We did shut down, for in-store customers, prior to our having to – before restaurants and bars had to close. About a week before, we did just because we saw the writing on the wall in terms of people being able to come in and drink. But we stayed open for retail sales and delivery and curbside and stuff like that.

People were buying a lot of wine, and we have a nice-sized wine-club membership. We've been in business for quite a few years, and we've owned it for almost five, so our customers are very supportive. We've actually fared relatively well – considering.

The first lounge concert we had [since mid-March] was back in June – Pat Foley played, and then Greg & Rich played a little after that. And Matt Barber is here tonight. I think they're very thankful to be back playing live in front of people.

But we did want people to know that we shrunk our hours to a two-hour performance from a three-hour performance. We're closing at 10 o'clock instead of closing at 11 and getting out of here at 12. So we definitely shrunk things down to accommodate everyone, including ourselves. But we've made a lot of adjustments with how we do things, and we're moving forward, and hopefully we can accommodate people as much as possible.

The first thing we're doing now [for concert events] is taking reservations. So we have a reservation fee, and we're keeping the crowd down to approximately no more than 30 people in a room that holds 65. Our capacity is actually bigger than that – it's actually 88 – but we keep everybody separated six feet apart, and the tables set apart, and only two parties at the bar at a time … . Those kinds of things. And the biggest thing we've done is negotiate with our performers, the musicians, so that we're charging a five-dollar reservation fee, and that's how we're going to pay you. Because we're operating with a much smaller crowd, so we can't pack the house and pay you what we've normally paid you. But they've been pretty receptive to that.

Everybody's been looking forward to coming back and playing, and keeping people away from the musicians – that's actually the hard part, because they want to say hello to them. But we want to keep them safe also, so we're doing everything in our power to keep everybody safe and practice social distancing as much as possible.

We've gotten great feedback from the audience, and great feedback on how we're handling it. You know, we sterilize every surface, and anybody who leaves and comes back, we wipe down the tables. We're following all the CDC guidelines, you know, wiping the restrooms down every 30 minutes – we're staying on top of all those important things.

The turnouts haven't been as big as maybe we expected, but it's okay. You know, it is what it is. We'll take our time. There's no rush. We don't want to go backwards.

You know, it's just the new normal. So we just have to stay in there and adjust to the times and try to make it work. But make it work while keeping everybody as safe as possible. One thing about the Grape Life is that live music is part of our DNA, so we wanted to bring that back as soon as possible … but with caution. That was the big thing for us. So we just changed how we did things, and it's going over pretty good. You know, slowly but surely.