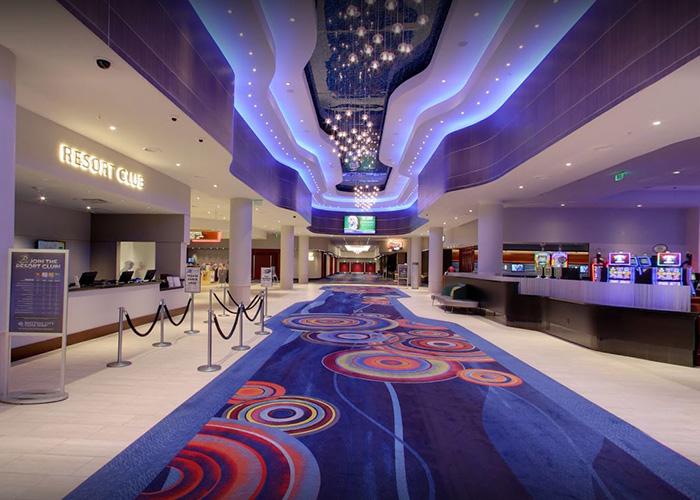 Ryan Lounsbury, Marketing Director for the Rhythm City Casino Resort in Davenport, discusses the venue's operations during this period of social distancing. We spoke on Thursday, July 2.

We're back doing the Friday and Saturday entertainment complimentary for guests, and we've added a comedy series that we're doing this summer starting in August. That'll be on Thursdays, primarily, but we do have one show that's on a Sunday, and those will be ticketed shows. It's something different for the property – we've done large comedy acts in our Event Center, but we wanted to try something new in our Rhythm Room, and it's kind of been a plan of ours for a while. Before all this started, we added a sound curtain around the Rhythm Room so we can actually close it down and make it its own intimate venue. So there's no sound that's leaked out onto the casino floor or into the Rhythm Room.

We've definitely had to adjust the seating. We've taken the occupancy way down – I think we can only put about 50 people in the Rhythm Room at this particular moment in terms of the complimentary shows. That's because we have to, obviously, distance the folks from the artists, but secondly, there's no dance floor now, right? Because that wouldn't be adhering to social-distancing guidelines. So we've actually closed our dance floor down, and we removed all the tables that were outlining the dance floor, as well. And of course, the traditional social-distancing measures exist, where you've got to have the tables six feet apart and so on.

Obviously, there's also notation of maintaining six feet of distancing while in line at the bar, and there's no outside food or beverage allowed into the Rhythm Room because, of course, we want that to be a clean environment, especially when we're serving food in there. We're not doing that now, because we can't keep the environment as clean as we'd want to. With limited occupancy, we had to limit the services in there, too. And there are no groups of 10 or larger – which doesn't really matter, because we also ask guests not to move chairs and tables so we can make sure we adhere to the social-distancing guidelines.

I think, generally, the customers are very excited to have the music back. I mean, it's not often you get provided free entertainment in this world. (Laughs.) And you know, we book about 50 percent local musicians, and the other 50 percent are smaller touring acts from places like Nashville, Minneapolis, Milwaukee – we've had bands up here from as far away as Florida. So the customers get to see something that doesn't happen a lot in this area with a price tag of “free.”

And while I think the musicians are excited to be able to perform and get a paycheck again, at the same time, I think they're also still a little weirded out. Because with our set-up – with the dance floor being right around the stage – there's now a big gap between them and the customers. So it's a little different of a feel for them. They're still having a good time and they're still putting on a good show, but it's definitely a different feel. And of course, we ask them that even though they travel together, they try to ensure that they maintain as much distance onstage as possible. But they're traveling together, and so they're hopefully doing the right thing – just like we expect all Iowans and Illinoisans to do the right thing. Make sure that if you're around others, you're adhering to the guidelines and social distancing so you don't infect someone else.

Governor Reynolds has allowed for indoor shows to happen, but you have to maintain social distance in order for that to happen. Clearly, that's not something that's easy to do, and with the caliber of acts that we book, from a financial perspective, it doesn't make a whole lot of sense to try to put that in place as well. Some venues around the country – and I'm sure you've seen some of the news – are actually moving forward with it, but then there are all these horrible publicity videos where people are clearly not social distancing from others. And obviously, we certainly don't want to be the cause of a spread in our community. So for us, it's prudent to keep the Event Center closed for now, and make sure we reschedule those [planned concerts], especially with some of the good names that we had coming.

I mean Gladys Knight was going to be here next week, the Beach Boys in August … . Both were going to end up being sell-out shows. And you just don't want to put people who really want to see these shows, and are concerned about their health, at risk. So relocating those to new dates certainly makes sense for us. We hope that we can open it again in October, but we're still going to continue to monitor what's going on in the community, and monitor what the governor is providing to us. And hopefully October happens, because both of the shows we have scheduled have been rescheduled from previous dates.

Our goal is to keep that entertainment going, and obviously we were excited about the shows that we had booked, and we want to keep them on the books. We haven't had really any artists not want to come back, and it's good that they are able to work with us on finding new dates.

It's tough, though. I mean, we're lucky that we're a multi-faceted business, so we have other revenue streams than the concerts. And if you're a venue specific to entertainment, I can understand the rush to try to get back to it. But I think it's important that we learn to develop other revenue opportunities to try to get through the storm. Here, we did some virtual shows on our Facebook page – some live-streaming with some of our entertainment acts that we've had where they did acoustic sets and answered questions from customers and so on. That was fun, and on our end, it was a way to try to keep up with that free weekend entertainment.

Or like with the curbside entertainment that's happening now … . I mean, that was a heck of an idea, and in the community that I live in, we've actually done it three different times with the RME [River Music Experience] – we've had three different acts come to our community and perform for our little HOA development. That was a great idea on their part, and I think it's certainly worked well for everyone.

You know, I've been booking entertainment since I was 17 (laughs), and from that perspective, we've never seen something like this before. It's just one of those things that we're gonna constantly be learning from, and the goal has to be to be patient with what's happening, and understand that with the decisions that we make as entertainment providers, we make them because we're thinking of safety. We're not going to put people in a compromised position.

So I think that's the biggest thing to remember: Be patient, and make sure that you're adhering to the standards and practices that are being instituted by the government and that are right for your business. Because again, you don't want to be in the position, like some of these other venues around the country have been in, where now, all of a sudden, there are these videos floating around talking about how horrible you're doing from a social-distancing standpoint. You know, you always want to put your best foot forward.