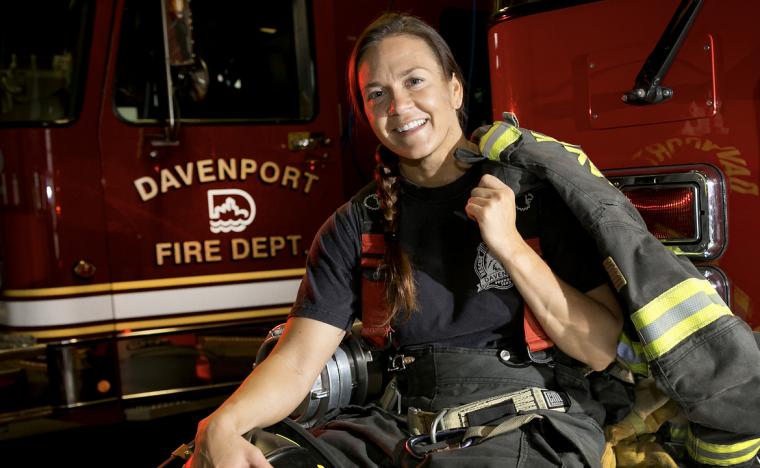 Jessie Adams presents in TEDxDavenport 2022 at the Adler Theatre -- June 25.

With this year's program focused on the theme “Epiphany,” a dozen lauded speakers will take to the Adler Theatre stage in TEDxDavenport 2022, a June 25 event hosting innovative, distinctive viewpoints on topics of all kinds, ranging from stories of entrepreneurship to creating new art forms.

Jessie Adams on "Don’t Avoid Obstacles. Overcome Them." Adams is a Quad City native, a nationally recognized fitness coach, and a former Firefighter and Founder of BelieveinU Fitness. She has evolved her passion for leading others to achieve their personal goals, bucket list adventures, and epic fitness challenges, through Peak Performance Coaching. Jessie has taken on her own challenges and competed on television shows such as NBC's American Gladiators, American Ninja Warrior and CMT’s Broken Skull Challenge. She believes nothing is impossible, and it's never too late to go after your greatest life adventures.

Laurie McGraw on "We Still Have Too Few Women in Leadership. Now What?" A 30-year health technology executive known for driving innovation, company growth, and industry standard-setting across the healthcare sector. Board director to NASDAQ companies, venture adviser, and health equity champion. Inclusive team builder and mentor, insightful speaker, Forbes Technology Council Member, Crain’s Notable Women Executive. Passionate outdoor enthusiast fortunate to live in both Boulder, CO and Big Sky, MT. Committed to building the next generation of leaders, podcast creator and host (Inspiring Women with Laurie McGraw) providing insights for women navigating their career paths and trying to make a positive impact in the world.

Bushra Amiwala on "Decoding the Hustle Mentality.” Amiwala is a media icon, student, dynamic speaker, and the youngest Muslim elected official in the United States. At the age of 19, she announced her candidacy for the Cook County Board of Commissioners, with the goal to serve as a voice for her underrepresented generation and other marginalized communities. Her campaign has been covered nationally by outlets such as the Chicago Tribune, The New York Times, Teen Vogue, and landing her on the cover of TIME magazine. Bushra recently went down in the Chicago History Museum as the Youngest Muslim Elected in the United States.

David Cohen on "A Bit About Bagpipes.” Cohen is an award-winning musician and recording artist who is accomplished on the Classical and flamenco guitar, Chinese pipa and bagpipes. David’s study of music has lead him to California, Nevada, New York, and Scotland. David has performed with the Pipes and Drums of the Jersey Shore Shillelagh’s and the Black Hawk Pipes and Drums of the Quad Cities. David resides in Kemmerer (the second "er" is silent), Wyoming.

Bernardo Llorente on "Soil Is the Solution.” Bernie is a proud husband and father of four, and a passionate Argentinian agronomist driven by excellence and service. He has more than 15 years of experience in agriculture working in different capacities – from technical advisory, to enabling farmers in Precision Ag and Conservative Crop Production, to developing business, operational management, and emerging technologies both in Latin America and the United States. With a strong sense of moral responsibility over his area of expertise, Bernie works every day to ensure continuous progress towards sustainable food production systems.

Kevin Reome on "What’s My Motivation?" Reome has been teaching improvisation at the Second City Training Center in Chicago since 2005. He is a founding member of the improv team Inside Vladimir and starred in the Upright Citizens Brigade production at iO Chicago. He has written and performed in The Eulogist (2001), Rahm Zombie (2012), The Reome Awards of Chicago to Benefit Alzheimer’s Research (2014), Lightfoot Loose (2019). Reome facilitates corporate improv workshops, emcees events and gives keynote addresses throughout the country. He has appeared on the ABC 7 talk show Windy City Live as well as Fox Chicago, NBC5 Chicago, WBBM News radio, WCPT Radio and WLS Talk Radio. Kevin has a B.A. In English and a teaching degree from Western Michigan University in Kalamazoo, Michigan.

Ruth Oelrich on "Parents and Teens Can Communicate If You Know How." Oelrich, a native of Davenport, IA, has spent the last 20 years working in the field of education as both an educator and school counselor. She received her MSE degree from the University of Wisconsin - Platteville in 2002. She has worked with youth in inner city and rural communities, in public, private, and charter school systems. She specializes in Attachment Theory, Suicide Prevention, Adverse Childhood Experiences, and Adolescent Mental Health. She has volunteered her time as a Crisis Response Counselor for both the YWCA Domestic Violence Program and the American Red Cross. She believes in leading a life of simplicity, calmness, and passion and strives to instill the belief in her students. Ruth is currently a Middle School Counselor in Milan, TN.

Michael Hurley on "Stand Up the Heroism in Each of Us.” Hurley was a CIA operations officer for 25 years. Following the 9/11 attacks he commanded a CIA team in Afghanistan where he was a leader in the hunt for Usama bin Laden. Serving on the 9/11 Commission, he led the Commission's counter-terrorism policy investigation into how two administrations had responded to the growing threat of al Qaeda and co-authored the Commission's national bestselling final report. He served twice on the National Security Council staff at the White House as Director for the Balkans and deployed to Bosnia during the war; he helped craft and implement the strategy that led to the most successful manhunt of war criminals in history. In his post-CIA career, he has been an adviser to the President of Colombia. Michael is an attorney who now advises a half dozen Silicon Valley high technology companies.

Aaron Warner on "Why Not Just Get Rid of the Dark Web?" Aaron educates and empowers people to be the driving force behind cybersecurity, so we can all safely enjoy more of our lives. Backed by decades of global IT and cybersecurity expertise, Aaron applies real-world experience and humorous perspective to guide audiences through the latest risks and remedies as well as bridge the gap between technical and business minds. His program will feature graphic content.

Dr. Robert Pearl on "Why Doctors Don't Wash Their Hands and Other Medical Mysteries." Dr. Pearl is the former CEO of the Permanente Medical Group (1999-2017), the nation’s largest medical group, and former president of The Mid-Atlantic Permanente Medical Group (2009-2017). In these roles he led 10,000 physicians, 38,000 staff and was responsible for the nationally recognized medical care of 5 million Kaiser Permanente members on the west and east coasts. Named one of Modern Healthcare’s 50 most influential physician leaders, Pearl is an advocate for the power of integrated, prepaid, technologically advanced and physician-led healthcare delivery.

Rebecca Bender on "Sex Trafficking in Plain Sight.” Bender is the CEO of the Rebecca Bender Initiative and founder of Elevate Academy, the largest online school for survivors of human trafficking in the world. She is an award-winning thought leader, advocate, and consultant who equips individuals and organizations to identify and fight human trafficking in their own back yards. Rebecca has been recognized by the FBI and received multiple awards for her leadership and advocacy in the field. She testified in front of the legislature to change Oregon SB673, and regularly testifies as an expert witness in court proceedings around the nation. Rebecca has trained well over 100,000 professionals, including FBI, Homeland Security, local law enforcement, vice units and medical personnel. Her program will feature graphic content.

Terry Franklin on "Bending the Arc of History." Franklin practices trusts and estates litigation in the Los Angeles law firm he co-founded Sacks, Glazier, Franklin & Lodise, LLP. A graduate of Harvard Law School and Northwestern University, Terrence is a fellow of the American College of Trust and Estate Counsel, and has served as Chair of its Diversity, Equity and Inclusivity Committee. Terrence received the 2021Lifetime Achievement Award from Chambers & Partners for his work in Diversity, Equity and Inclusion in the legal community and was named to the 2020 and 2019 list of "Most Influential Minority Lawyers" by Los Angeles Business Journal; and was also named Best Lawyers’ "Lawyer of theYear" in 2016 for Trusts & Estates Litigation - Los Angeles.

With Matt Woods delivering slide-guitar performances in the Adler Theatre lobby throughout the afternoon, TEDxDavenport 2022 will take place from noon to 4 p.m. on June 25, reserved $23 tickets include cash snack and drink bars and two complimentary gifts, and tickets are available by calling (800)745-3000 and visiting AdlerTheatre.com.