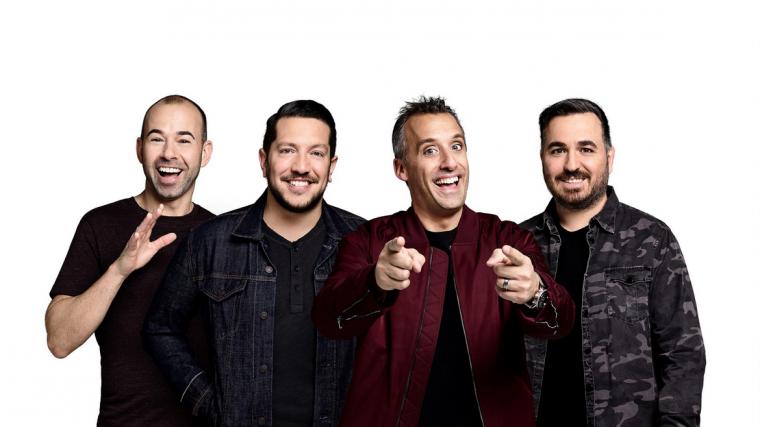 The Tenderloins at the TaxSlayer Center -- November 19.

Best known for their hit TruTV series Impractical Jokers – a reality/comedy program that the New York Post's Linda Stasi called “possibly the funniest, most ridiculous show I’ve seen in years” – the touring comedians of The Tenderloins bring their senses of humor and camaraderie to Moline's TaxSlayer Center on November 19, treating fans to the verbal wit, sketch comedy, and slapstic antics of “The Cranjis McBasketball World Comedy Tour.”

Formed in 1999 by a quartet of Staten Island-based high-school friends, The Tenderloins is a New York-based comedy troupe whose members – Joseph “Joe” Gatto Jr., James “Murr” Murray, Brian “Q” Quinn and Salvatore “Sal” Vulcano – enjoyed their first brush of fame as $100,000 winners of NBC's “It's Your Show” competition. Currently, the men are also the creators, executive producers, and stars of Impractical Jokers, a hidden-camera reality series that premiered on TruTV on December 15, 2011. Now in its seventh season, with its eighth scheduled to air this February, Impractical Jokers follows the comedians of The Tenderloins as they coerce one another into doing public pranks in the style of Candid Camera. With each new season, the show continues to take dares to outrageous levels with new over-the-top hijinks, and according to the New York Times, the series' comic coceit “pays off twice: once in the reaction of the unsuspecting passer-by, once in the discomfort of the fellow doing the asking."

In the United States, Impractical Jokers is a top-five show in its cable-TV time slot, and in India and the United Kingdom (where it airs on Comedy Central UK), the series is ranked number-one. But in addition to their series, The Tenderloins have toured steadily over the last four years, with the comedians' highly-successful “Where’s Larry?” and “Santiago Sent Us” tours playing to hundreds of thousands of fans in North America and abroad. Among their most successful performances to date were three sold-out nights at Radio City Music Hall, a sold-out evening at Madison Square Garden, and five sold-out shows at London’s O2 Arena, and an Impractical Jokes movie is currently in post-production, with its release scheduled for next summer.