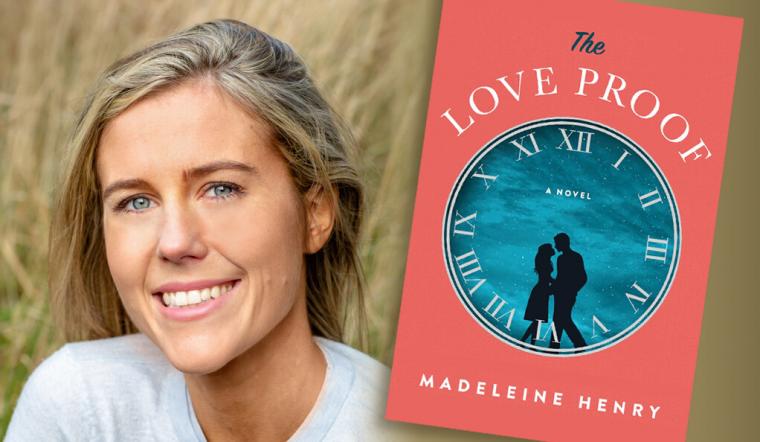 On August 3, in a live meeting of the Moline Public Library's Pageturners Book Club, acclaimed novelist Madeline Henry will appear in a special virtual author's visit to discuss her 2021 novel The Love Proof, a work that inspired noted The Lies That Bind author Emily Griffin to call the book a “captivating, heartfelt, and utterly unique tale.”

In The Love Proof, Sophie Jones is a physics prodigy on track to unlock the secrets of the universe. But when she meets Jake Kristopher during their first week at Yale, they instantly feel a deep connection, as if they've known each other before. Quickly, they become a couple, yet slowly, their love lures Sophie away from school. When a shocking development forces Sophie into a new reality, she returns to physics to make sense of her world and begins grappling with life's big questions – one of which is: “How do you cope with unexpected change and loss?” Inspired by her connection with Jake, Sophie consequently throws herself into her studies, determined to prove that true loves belong together in all realities.

In addition to The Love Proof, Madeleine Henry is the author of 2019's Breathe In, Cash Out, and her most recent novel was selected by the New York Times as a "New and Noteworthy" book. Her two novels to date have been featured in The Washington Post, The New York Post, and Entertainment Weekly, and Henry has appeared on NBC, CW, WABC, and WCBS. Previously, she worked in Goldman Sachs after graduating from Yale in 2014, and as Henry explained to Parade magazine, "It’s very hard psychologically to break away from the pack and take a risk. I was lucky in that I had enough interest from agents and publishers that I felt like this was going to work out for me. I wasn’t leaving with a novel idea; I was leaving with something that I knew someone would buy, so it wasn’t jumping into the blue exactly. I think that the idea of making your own path is very scary, but I had more safety than not."

Madeline Henry's virtual author visit to the live Pageturners Book Group event begins at 1 p.m. on August 3, participation is free, and more information is available by calling (309)524-2470 and visiting MolineLibrary.com.