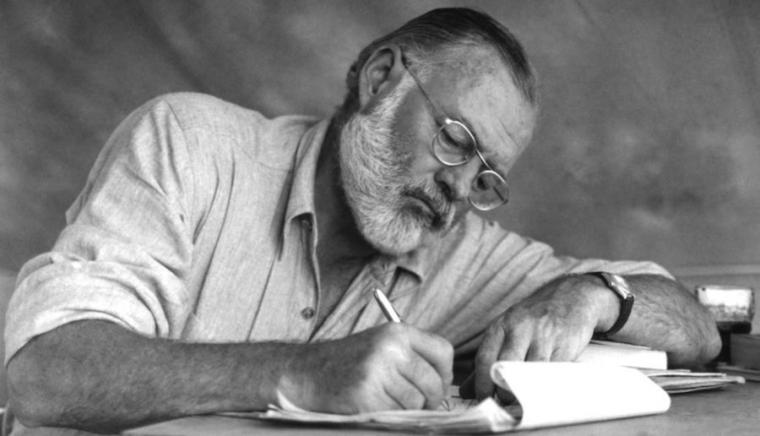 Hosted by the Moline Public Library as a companion program to WQPT-TV's new Ken Burns documentary Hemingway, the virtual presentation A Visit from Ernest Hemingway will, on April 12, treat viewers to an audience with the legendary writer as portrayed by Brain “Fox” Ellis, the award-winning storyteller and historical interpreter who last portrayed famed industrialist John Deere in a February event for the library.

A novelist, short-story writer, and journalist, Hemingway was famed for his economical and understated style – which he termed “the iceberg theory” – that had a strong influence on 20th-century fiction, while his adventurous lifestyle and public image brought him admiration from later generations. Hemingway produced most of his work between the mid-1920s and the mid-1950s, and he was awarded the Nobel Prize in Literature in 1954 for what is likely the most recognized of his novels, The Old Man & the Sea. Over the course of a career that ended with Hemingway's suicide in 1961, he published seven novels, six short-story collections, and two nonfiction works, with three of those novels, four short-story collections, and three nonfiction works published posthumously. Many of his writings are considered classics of American literature, as in addition to The Old Man & the Sea, Hemingway was the author of 1926's The Sun Also Rises, 1929's A Farewell to Arms, 1937's To Have and Have Not, and 1940's For Whom the Bell Tolls.

Ellis' A Visit from Ernest Hemingway will take place at noon on April 12, and while the presentation is free, registration is required to view the virtual event. For more information, call (309)524-2470 or visit MolineLibrary.com.