“The White Rose: The Student Resistance Against Hitler, Munich 1942-1943,” through February 12 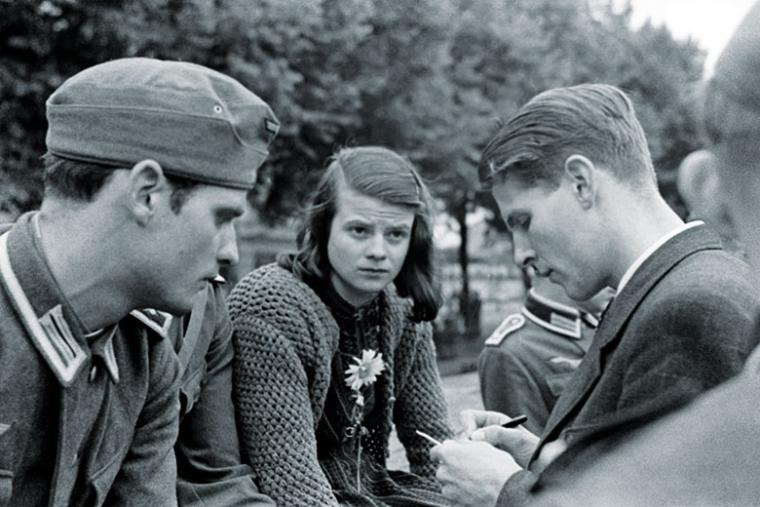 “The White Rose: The Student Resistance Against Hitler, Munich 1942-1943" at the German American Heritage Center -- through February 12.

A fascinating exhibition commemorating the bravery and integrity of a group of students in the face of political evil and popular indifference, The White Rose: The Student Resistance Against Hitler, Munich 1942-1943 will be on display at Davenport's German American Heritage Center through February 12, the informative and thought-provoking touring exhibition on loan from the White Rose Foundation in Munich, Germany.

The White Rose was a non-violent, intellectual resistance group in Nazi Germany led by five students and one professor at the University of Munich: Willi Graf, Kurt Huber, Christoph Probst, Alexander Schmorell, Hans Scholl, and Sophie Scholl. The group conducted an anonymous leaflet and graffiti campaign that called for active opposition to the Nazi regime, their activities started in Munich in June of 1942, and ended with the arrest of the core group by the Gestapo the following February. They, as well as other members and supporters of the group who carried on distributing the pamphlets, faced show trials by the Nazi People's Court (Volksgerichtshof), and many of them were sentenced to death or imprisonment. The Scholls, as well as Probst, were executed by guillotine four days after their arrest, on February 22, 1943. During the trial, Sophie interrupted the judge multiple times, although no defendants were given any opportunity to speak in their defense.

The group wrote, printed, and initially distributed their pamphlets in the greater Munich region, and eventually secret carriers brought copies to other cities, mostly in the southern parts of Germany. In July of 1943, Allied Planes dropped their sixth and final leaflet over Germany with the headline "The Manifesto of the Students of Munich." In total, the White Rose authored six leaflets, which were multiplied and spread, for a total of roughly 15,000 copies. They initially denounced the Nazi regime's crimes and oppression, and called for resistance, and in the group's second leaflet, they openly denounced the persecution and mass murder of the Jews. By the time of their arrest, the members of the White Rose were just about to establish contacts with other German resistance groups, among them the Schulze-Boysen/Harnack group of the Red Orchestra. Today, the White Rose is well known both within Germany and worldwide, and has been the subject of several books and films.

On October 2, the day of the White Rose exhibit's opening, the German American Heritage Center will also be hosting a 4 p.m. poetry slam, featuring 10 young area poets sharing their original works inspired by the venue's contest theme of “resistance.” All individuals previously chosen for the slam are between 13 and 20 years of age, with their poems all five minutes or less in length, and the contest winners all receive $100 as compensation for their entries.

The White Rose: The Student Resistance Against Hitler, Munich 1942-1943 will be on display at the German American Heritage Center through February 12, with regular venue hours Tuesdays through Saturdays from 10 a.m. to 4 p.m. and Sundays from noon to 4 p.m. Exhibit entrance is free with $3-5 museum admission, and more information is available by calling (563)322-8844 and visiting GAHC.org.