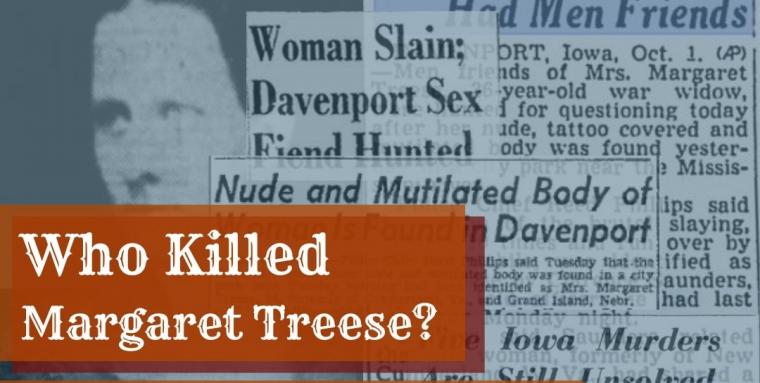 An unsolved Iowa murder dating back 75 years will be the fascinating focus of an October 9 presentation at the German American Heritage Center, with local author John Brassard Jr. visiting the Davenport venue to explore the lingering mystery of Who Killed Margaret Treese?

On the morning of September 30, 1947, amidst the bucolic beauty of Credit Island, a Davenport woman was found to be the victim of a brutal murder. As author Brassard writes on JohnBrassardJr.com, "Police theorized that the killer had wanted the woman to be found. They had left her in plain sight; George Whitman had spotted her just driving in to work. Besides, if they had really wanted to dispose of the body, all they would have had to do was drag it to the Mississippi River only a very short distance away." Yet as Brassard continues, "In addition to not having an idea who the murderer might have been, investigators didn’t know who the woman was, either.

"There was no kind of identification found in the area, and no one recognized her as maybe a regular hiker or worker in the area. Perhaps the most remarkable thing about the victim was that she had a number of tattoos, a highly unusual characteristic for women in the 1940s. Two names, 'Frank and James Stanley,' were tattooed on her left forearm, and on her left upper arm was another name, 'Richard,' centered in the middle of a heart. On her right forearm was a social security number, along with a name and date: 'Peggy Stan, 1946.' Two more tattoos were on her left leg, one with two names, 'Bill and Ezzie,”'and a phrase, 'Rock of Ages.' On the victim’s chest was a snake tattoo, along with one final name 'Stanley Dombkiwicz and True Love.'"

Investigators ultimately revealed the victim to be Margaret “Peggy” Treese, who lived at the Standard Hotel (now the German American Heritage Center) with her lover Clarence Saunders. But why was she killed? And by whom? And why, 75 years later, are those questions still unanswered? True-crime obsessives are invited to xplore those queries with Brassard during his presentation Who Killed Margaret Treese?, a deep look into one of the most brutal unsolved murders in the Quad Cities history.

John Brassard Jr. is an author, historian, and storyteller from Eastern Iowa. He is the author of three books, including his recent Murder & Mayhem in Scott County, Iowa, and has written several newspaper and magazine articles on Iowa history for publications including the Quad-City Times, North Scott Press, DeWitt Observer, Catholic Messenger, and Iowa History Journal. Brassard has given multiple presentations across the state, as well as given numerous radio and podcast interviews, and is the host of his own podcast The Kitchen Table Historian, a show about true crime, dark history, and the paranormal throughout the Midwest. He has also worked with the Scott County Historical Preservation Society, Central Community Historical Museum, Friends of Walnut Grove Pioneer Village, Catholic Historical Center, and Clinton County Pioneer Cemetery Association.

Who Killed Margaret Treese? will be presented at the German American Heritage Center on October 9, and admission to the 2 p.m. event is free for the museum's members and $5 for non-members. For more information and to register, call (563)322-8844 and visit GAHC.org.