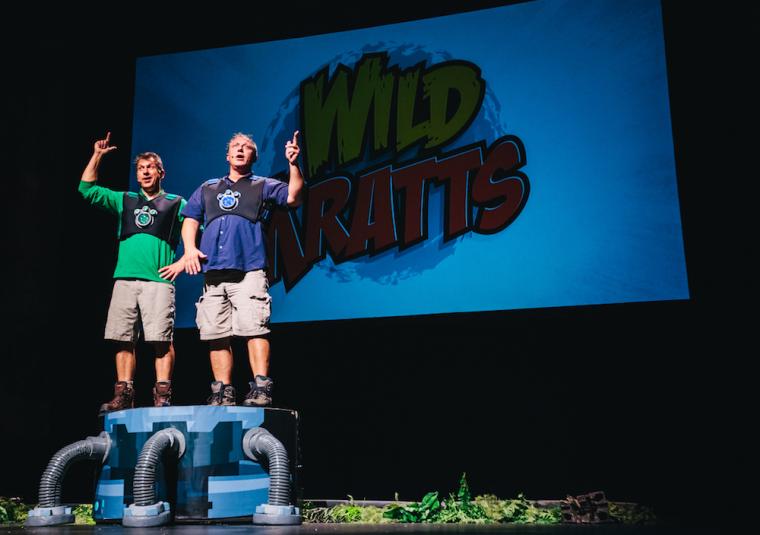 An Emmy-nominated animated program being brought to vivid life through its current national tour, Wild Kratts Live! lands at Davenport's Adler Theatre on November 13 with its heroic adventurers played by namesakes Chris and Martin Kratt, brothers who voice their animated counterparts for the wildly popular PBS Kids series.

Created by the Kratts and debuting in January of 2011, Wild Kratts is an American-Canadian educational live-action/animated series designed to educate children to concepts of biology, zoology, and ecology, simultaneously teaching kids how they can make big impacts in the smallest of ways. Most of the show's episodes finds the costumed Kratts attempting to save animals from nefarious villains, general human influence, or confusion on the part of a baby animal, and tend to address real-world problems either directly (as in the “Stuck On Sharks” episode in which a shark is captured for making shark-fin soup) or indirectly through allegory (with the series' “Build It Beaver” an allegory for deforestation). Now in its fifth season, Wild Kratts is broadcast in more than a dozen countries worldwide and has been the recipient of six Daytime Emmy Award nominations, including multiple citations for directing and writing in a children's series and, this year, a nod for Outstanding Children's Animated Series.

In the Adler's Wild Kratts Live! presentation, the animated Kratt Brothers “come to real life” in a classically Wild Kratts story and activate some fan-favorite Creature Power Suits to confront the comic villain Zach. Through hilarious pratfalls and the show's signature animal “wow facts,” the Wild Kratts team up to rescue their favorite invention from the evil mastermind's clutches, and in the process entertain and educate family audiences with the real-life knowledge of the Kratts themselves. Older brother Martin holds a Bachelor of Science in Zoology from Duke University, while younger sibling Chris earned a Bachelor of Arts in Biology from Minnesota's Carleton College.