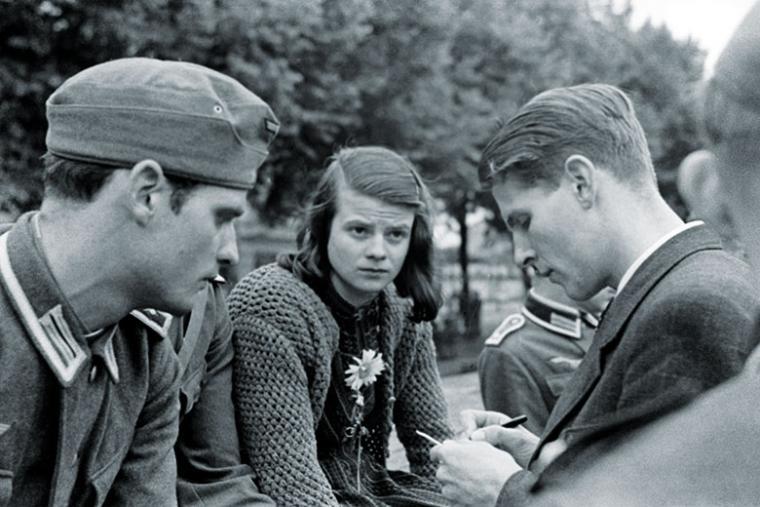 In conjunction with the German American Heritage Center's current exhibition The White Rose: The Student Resistance Against Hitler, Munich 1942-1943, the Davenport venue sponsored a poetry contest seeking original works inspired by the theme of “resistance.” All individuals chosen for the slam were between 13 and 20 years of age, with their poems five minutes or less in length, and the contest winners received $100 as compensation for their entries. With the kind permission of the GAHC and the authors, here are the remainder of winning entries, with four additional poems found at “Words of Resistance: Part I” and “Words of Resistance: Part II.”

We resist against the regime,
Despite the danger.
We could be caught any moment.
We drop leaflets everywhere. In the mail. On walls. From the sky. In attempts to inform people
of the reality that we face.
They wouldn't trust us.

It isn't foolproof. It is proof of fools.
Eventually, we fall. Everyone does. That's how life is.
But we did what we wanted to do and more.

just to be discriminated against.

problem when it’s them who can’t

see the real humans we still are.

Us, this community isn’t different,

but unique and unnatural,

it’s just another way of describing ones

true beauty with a lawful twist.

If you find that wrong, you

us and how we are.

We didn’t give in, nor give any

We gave the effort to fix things, we

Yet we don’t win.

The picture perfect side is not the reality,

But instead everyone has to fight for

inaccessible to people with disabilities.

The telling another person to build

They have this miraculous advantage and they

start to realize they can teroize and

come for the ones that don’t.

Bystanders don’t understand anything when

it comes to this injustice, we feel as were

being looked down upon for being different.

We are declined jobs or, were

not always granted them.

These privileged people get things handed

while we needed a law just to have

accessible buses to those who need it.

People are sometimes unsatisfied with

or their placement treats them unfairly.

After all this time these people who

resisted to be discriminated against got

And that’s just something to be aware of

Even though it was only passed thirty

two years ago, they are already trying

They have noticed the fact they can get

away with these forgotten bits…

I ask after every argument

Words that flow out my mouth almost like it's on repeat

Why are you already unhinged,

What did I do wrong?

The word "help" races through my mind

My fault, this again

Why do I think it's my fault

I'm trapped, locked in my own cell

I can't leave I'm scared of what's to come

Will he have an outburst

Will I stay trapped

Even if I leave I still have me

My mind, the thoughts, the fears

the things I'm too scared to do like run.

They laid there on the boat

Ancestors written in memory of the past

The day that is not gone a day people remember

Though a tough subject and we have thought

Will never know the true sacrifices they have fought

But thats not the only slavery there was

Men women children alike all sacrificed not just in one night

Who fought for a right

Just a few names who fought for justice

Though he still fought to infringe what he saw

He traveled the lands

And traveled far he found the purpose

The end of the circus

He had the idea

An idea that fought the tyranny he saw

So he got the captains the crew and the original workers

And traveled the lengths

But at the end he found the passion

He found what was wrong

He got witnesses and found what would beat em!

He wrote a book

The History, Rise, Progress and Accomplishment of the Abolition of the African Slave Trade by the British Parliament

Chronicled what he saw

He helped put an end to this mass mutiny

Though they were still hurt, hurt brutally

She knew the troubles and knew them well

And the trouble that would entail

After being a slave

And trying to escape she failed

But did not let her differences erase

She kept on fighting

And fighting she shall

She went public with what her past created

And helped end the fight

To get her right

Was a slave beaten and treatin like a cattle

And all you could hear sounds like a rattle

He wrote a story

And wrote it well

He was trapped and captured

Taken from his home

No more never again never will he see his home again

By someone with power

How was this not a crime

Just forced to buy freedom he was meant to have

So he wrote some books and fought

William cowper was a man

A poet of sorts and wrote many he did

He lived and sorts

With what he could write

fought, fought all of these people fought, though not together they created a bond

These were superheroes not ones people knew they needed

150 years ago in which people still stand up to fight

So all the people who fought through history

racism that people deal with

don't be a bystander you have to help

And this of “resistance”

The White Rose: The Student Resistance Against Hitler, Munich 1942-1943 will be on display at the German American Heritage Center from through February 12, with regular venue hours Tuesdays through Saturdays from 10 a.m. to 4 p.m. and Sundays from noon to 4 p.m. Exhibit entrance is free with $3-5 museum admission, and more information is available by calling (563)322-8844 and visiting GAHC.org.