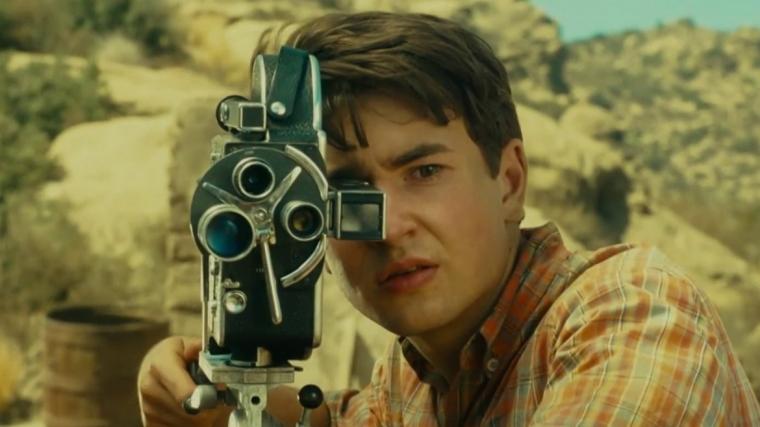 Gabriel LaBelle in The Fabelmans

Very early in The Fabelmans – Steven Spielberg's fairytale memoir recounting his youthful trek toward becoming one of history's most successful filmmakers – there's a scene in which the prepubescent Spielberg stand-in Sammy is told by his mother to go ahead and make his experimental train-crash movie against the wishes of his father. Handing him a camera, Mom says, “It'll be our secret,” and tells her son that after the project is finished, he can watch it all he wants, over and over, without anyone else having to know about it. The Fabelmans boasts a number of lovely scenes and a truly great Spielberg alter-ego in Gabriel LaBelle. Yet I can't help wishing that the now-75-year-old Spielberg had heeded his screen mom's advice and kept The Fabelmans as a hugely budgeted home movie where only he could endlessly watch his creation, which would certainly have prevented some of us from explaining why we didn't – why we very much didn't – entirely care for the thing.

Showing a movie lover a Spielberg is like showing a lover of paintings a Rembrandt or a Picasso: You recognize the artist the moment you see the work. To his credit, Spielberg isn't at all trying to disguise his authorship of The Fabelmans. Not only is the surname “Fabelman” intensely obvious and our protagonist Sammy (portrayed as a teen by LaBelle and as a tyke by the wide-eyed, exquisitely named Mateo Zoryon Francis-DeFord) unmistakably Steven, but the movie itself has been shot, scored, edited, and written precisely as “A Steven Spielberg Film” has forever been. God love him, but to quote South Pacific, Spielberg has always been as corny as Kansas in August, and so, too, is his accounting of life from his 1952 childhood in New Jersey through his happy time in Arizona to his less-happy, mid-'60s tenure in northern California. Yet beyond finding one in rare fits and spurts, anyone hoping for a more involving, more insightful, more honest telling of the Spielberg tale, I'm afraid, will have to look elsewhere. (Maybe, for instance, Susan Lacy's 2017 documentary Spielberg, which covered much of this terrain with a far-clearer eye.) I can't recall where I read it, but I remember co-star Seth Roben recently saying that Spielberg was in tears for nearly the entirety of his shoot with him. I'm sure he was. That doesn't mean the rest of us were crying – except, possibly, at the sadly wasted opportunity of it all.

For my money, there is one legitimately incandescent sequence in The Fabelmans. In it, teen Sammy is shooting a frenzied combat scene, and its aftermath, in a bit surely (and amusingly) meant to suggest the inspiration for the director's famed D-Day opener in Saving Private Ryan. It's hugely entertaining, and even cinematically informative, to see how the young man timed his squib effects, and operated his rolling camera, and scooted dead-body extras from one locale to another to give the impression of twice as many corpses as were actually available. Best of all, and away from anyone else's earshot, Sammy has a private conversation with the scene's WWII hero, explaining to the initially confused novice what kind of emotion he wants to evince. (“These dead soldiers are your family.”) Because it's Spielberg, I expected to bawl buckets during The Fabelmans. But the only time the movie truly got me was in this sequence, in which an acting neophyte slowly but surely realized what true emotional commitment was, and Sammy/Steven realized how the power of words – smart, succinct words privately shared – could augment the power of visuals. It felt like a learning moment, and a wildly satisfying one, for everybody: director, actor, audience. I could've watched this scene all day, just as I could've viewed a 24-hour marathon of Sammy making his Western short more effective by ingeniously adding pin pricks to celluloid footage to replicate the explosions of bullet fire. 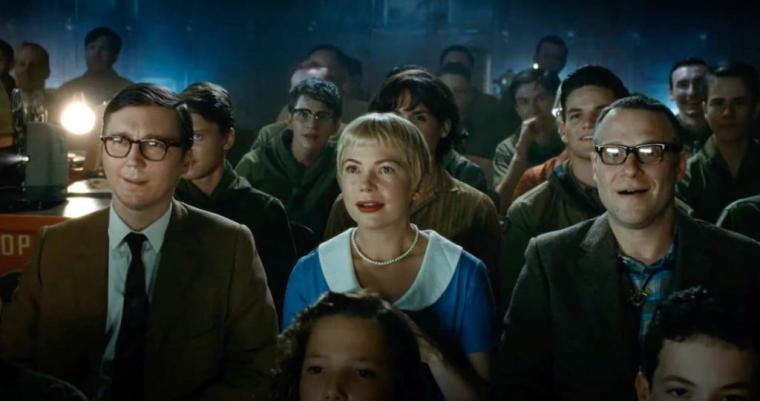 All of this is to say that had Spielberg's cinematic memoir expressly focused on his burgeoning talents, I might easily have loved it. Yet in the manner of Kenneth Branagh's Belfast, the movie also has to detail the man's upbringing, and that proves distractingly troublesome. Not only is Spielberg's well-documented personal history – Mom leaving Dad for a close family friend; anti-Semitic bullying in his teen years; our Jewish hero toying with Christianity in order to get laid – the stuff of lore by now, but The Fabelmans' director doesn't appear able to make any of this information fresh even for newbies to his saga. There are a number of scenes in this two-and-a-half-hour movie that I wish had been excised completely: the campfire sing-along initiated by “Uncle” Benny (Seth Rogen at his most predictably Seth Rogen-y); the come-to-Jesus make-out excuse devised by Sammy's protestant crush (Chloe East, a total cartoon); absolutely everything involving Sammy's mom's unexpected, weirdly unresolved adoption of a pet monkey. But I was more saddened for also wanting to excise almost every scene involving Sammy's parents, because Paul Dano and Michelle Williams – to say nothing of the film's audience – deserve way-better than this.

Dano is one of our most reliably eccentric and inventive character actors, so it's particularly disappointing to see him subvert his natural talents in service to a character that everyone on-screen only describes as nice: hard-working, thoughtful, practical, unimaginative. If you've seen The Fabelmans' trailer, Dano's entire performance as patriarch Burt can be condensed into his expression when his wife's pet monkey sits on his head, where he looks mildly aghast, but not so perturbed as to actually complain about it. Watching Dano vacillate between well-meaning concern and well-meaning acceptance in the role of Burt feels like an imposed straightjacket. Although the lack of personal verification makes sense given that Spielberg is presenting events as he saw them, it's frustrating as hell, for viewers, that we don't even know – nor are given any strong hints – whether Burt was aware of his wife's emotional affair with cherished pal Burt. It's a relationship whose transparency, in Spielberg's telling, only a blind man would fail to see. But Dano not being able to imply either knowledge or lack of knowledge makes Burt an inscrutable cipher.

Williams' role as matriarch Mitzi, meanwhile, provides plenty of Oscar clips. Too many, it turns out; her performance is almost like an Oscar-clip pastiche. Anyone familiar with Williams' credits over the last 20-plus years knows that the performer can most likely do anything. But what she apparently can't do, based on the evidence in Spielberg's latest, is make a coherent character out of nothing but incoherence. I applaud, and certainly don't envy, Spielberg's task of wanting to present a full-blooded portrait of his mom given only 150 minutes of screen time, and in Michelle Williams, he certainly found the right performer for the job. But it proves an impossible job. Trapped under an unflattering pageboy hairdo, Williams has to be a selflessly devoted mother who is also a raging narcissist who is also a world-class pianist who is also an (emotionally) adulterous spouse who is also lunatic enough to drive her kids into the mouth of an incoming tornado who is also an unfettered champion of her son. (Sadly but predictably, at no point does Williams' Mitzi utter a word about any accomplishments of Sammy's three female siblings, nor does she extend even a half-second's mention of her love for her daughters.) It's inarguably sweet that Spielberg would want to compose a love letter to his mom. But no one – not even the acting genius that is Michelle Williams – should be expected to deliver one to someone this complicated in a mere feature film's running length. 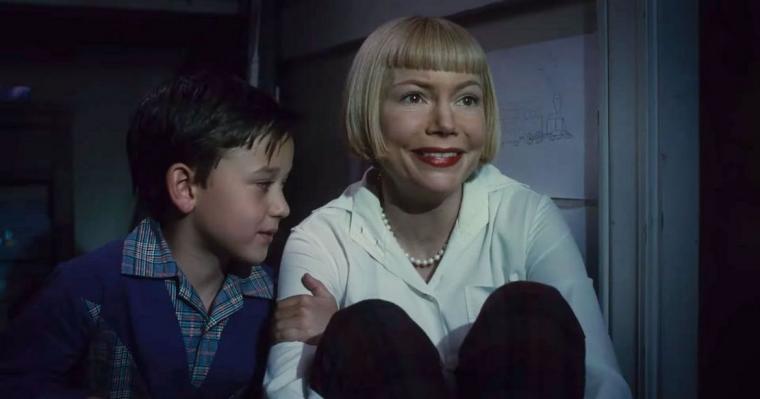 Until now, I've held off on mentioning that Spielberg's latest, which he co-wrote, was co-scribed by Tony Kushner, primarily because I'm a little depressed that the playwright responsible for Angels in America has now so fully attached himself to Spielberg's Amblin brand. (Kushner also wrote the scripts for the director's Munich and Lincoln, and adapted last year's West Side Story.) Kushner, like Spielberg, is a master at his craft. But in this film, you'd have no sense of Kushner's massive talent based on his remedial “love is just as important as attention” platitudes, or his scenes of high-school bullying that are indistinguishable from any number of Jets-v-Sharks confrontations, or one of Sammy's sisters dispensing some tough-love advice that is maybe listened to but summarily ignored. By accident or design, Kushner has all but become a Spielberg hand puppet, as recognizable in his dialogue-driven effects as Janusz Kominski is for his cinematography, Michael Kahn (working here with Sarah Broshar) is for his editing, and, it should go without saying, the apparently immortal John Williams is for his score.

If there's any reason beyond the obvious ones to check out The Fabelmans (and also beyond the priceless presence of Jeannie Berlin as Sammy's great-aunt), it's Gabriel LaBelle. From his first seconds on-screen, it's evident that LaBelle is working in a more naturalistic, emotionally present realm than his co-stars, and the young actor makes a lot of dopey scenes work through sheer, guileless enthusiasm – LaBelle not only looks the part but feels the part. LaBelle is especially potent when forced to confront Mitzi, and in those encounters, you get a sense of the stronger, tougher-minded film The Fabelmans might have been. Sadly, though, we only get that movie in rare battles of will between mother and son, and in the unexpected arrival of a long-forgotten uncle (Judd Hirsch, gleefully eating the scenery), and Sammy's unanticipated encounter with Hollywood legend John Ford (David Lynch, whose introduction is practically a David Lynch picture of its own). The rest of the movie is pro forma Spielberg uplift and dispiriting narrative predictability. If last year's CODA win is any sort of sign, Oscars voters will love it.