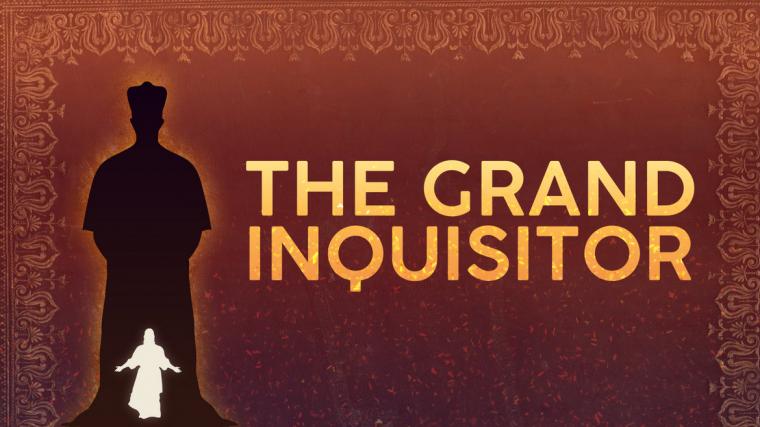 Riverside Theatre's “The Grand Inquisitor" at the University of Iowa -- October 21 through 31.

A masterpiece of world literature evocatively re-imagined for the stage, Riverside Theatre's one-act drama The Grand Inquisitor enjoys an October 21 through 31 run in the University of Iowa's intimate Main Library Gallery, the hypnotic monologue adapted by Marie-Hélène Estienne from the legendary text by Fyodor Dostoevsky.

Originally a poem contained within the text of Dostoevsky's 1880 novel The Brothers Karamazov, The Grand Inquisitor is recited by the character Ivan Karamazov, who questions his brother Alexei, a novice monk, about the possibility of a personal and benevolent God. The "Grand Inquisitor" section has long been considered one of the most important parts of Dostoevsky's work – and it is also one of the best-known passages in modern literature – because of its ideas about human nature and freedom and its fundamental ambiguity. In a long soliloquy, the Grand Inquisitor defends the following ideas: Only the principles of the devil can lead to mankind's universal unification. Give man bread, control his conscience, and rule the world. Jesus limited himself to a small group of chosen ones, while the Catholic Church improved on his work and addresses all people. The church rules the world in the name of God, but with the devil's principles. And Jesus was mistaken in holding man in high esteem.

A chilling parable about life, religious faith, and the stories that hold our society together, Riverside Theatre's The Grand Inquisitor is a monologue of urgency and intensity adapted by Estienne, and with the title character played by Actors' Equity Association member John William Watkins, who returns to the company following last year's virtual performance of A Christmas Carol. Riverside Theatre co-founder Ron Clark serves as director for the 45-minute play, Joshua Fryvecind appears in the production alongside Watkins, and other members of The Grand Inquisitor's creative team include scenic and lighting designer Chris Rich, costume designer Jenny Nutting Kelchen, stage manager Maggie McClellan, sound designer Bri Atwood, and COVID safety advisors Adam Knight and Jody Hovland.

The Grand Inquisitor will be staged in the University of Iowa's Main Library Gallery October 21 through 31, with performances Thursdays through Saturdays at 7:30 p.m. and Sundays at 2 p.m. While the performances are free, seating is extremely limited, and more information and tickets are available by calling (319)887-1360 and visiting RiversideTheatre.org.