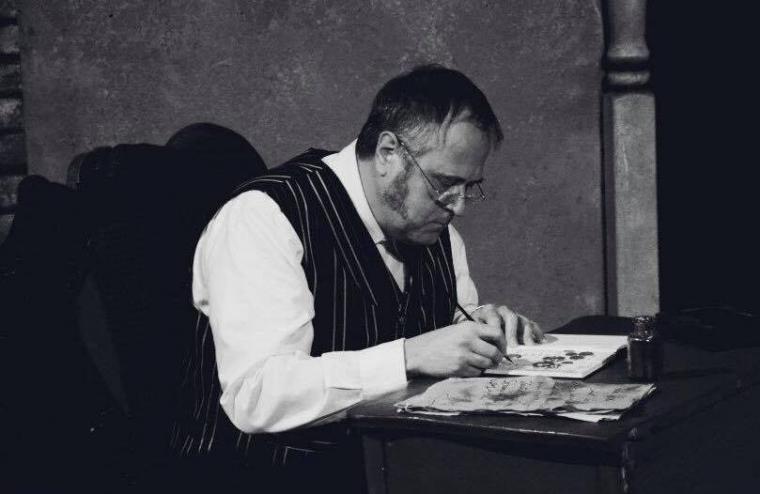 Amidst the joys and festivities of the season, it wouldn't be the holidays if they didn't also come complete with a hearty cry of “Bah, humbug!” And from December 14 through 22, Countryside Community Theatre will deliver that cry – along with messages of hope and wonder and scores of beautiful music – in the Boll's Community Center production of A Christmas Carol, the seasonal delight boasting music and lyrics by Danny White and a book by the show's director Tristan Tapscott.

Based on the Charles Dickens classic, A Christmas Carol tells the tale of the curmudgeonly Ebenezer Scrooge, who is visited by the ghosts of Christmases Past, Present, and Future, and of whom hope to change his destiny and save his soul. As audiences hear stories from Scrooge's life, they travel back and forward in time, and through a series of strange and magical journeys and colorful characters, the miserly old man ultimately discovers the true spirit of the holiday season. Tapscott's and White's adaptation of A Christmas Carol debuted in 2012 at the former District Theatre in Rock Island and quickly became a holiday favorite, enjoying popular runs in 2013, 2014, and 2015. The 2013 version of the show was recorded live and aired on WQPT on Christmas Eve and Christmas Day, and according to the River Cities' Reader's Thom White, the production “is remarkable for Tapscott's handling of the narrative and White's cleverly crafted lyrics and gorgeous instrumentation.”

Directed by Tapscott – who has also helmed area productions of such theatre classics as The Sound of Music and The Mousetrap – and music directed by Cindy Ramos, A Christmas Carol finds Scrooge again played by Doug Kutzli, who originated the role in its 2012 presentation and was recently seen in the Circa '21 Dinner Playhouse's The Bridges of Madison County and The Rocky Horror Show. Other original cast members include Sara Kutzli, Martha Behnke, and Wendy Czekalski, playing the Ghost of Christmas Past, Fan, and Mrs. Cratchit, respectively, with Lillian Cobert returning for her fourth production of the show, this time playing Belle and Emma. Popular Quad Cities actor Patrick Gimm, meanwhile, steps into the roles of Jacob Marley and Old Joe, and the rest of the ensemble is composed of 10 additional area talents: Cecilia Behnke, Laney Chandler, Scarlet Chandler, Sara Diericx, Payton Haack. Joshua Malone, Analisa Percuoco, Jim Schneider, Emily Stutting, and Justin Tegeiler.

A Christmas Carol will be staged December 14 through 22 at Princeton's Boll's Community Center, with performances at 7:30 p.m. on Fridays and Saturdays, and 2 p.m. on Sundays. Admission is $15 for everyone, and more information and tickets are available by e-mailing cctonstage@hotmail.com or visiting CCTOnStage.com.