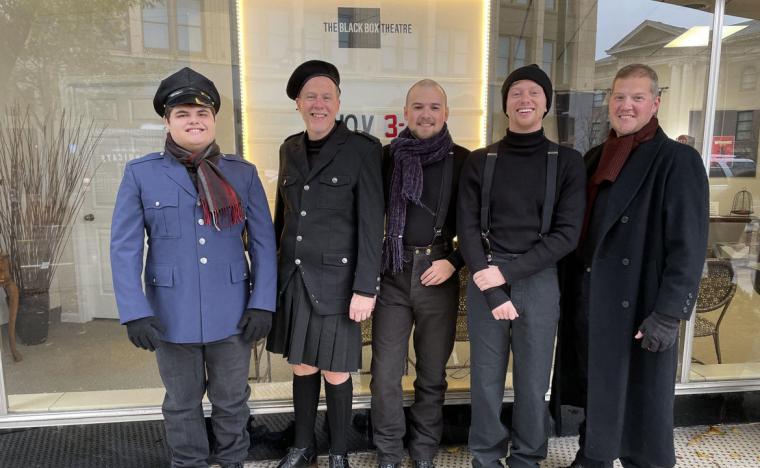 Jorge Mendez, Don Faust, Phil Tunnicliff, Daniel Williams, and Kirsten Myers in “All Is Calm" at the Black Box Theatre -- December 8 through 17.

Lauded by the St. Louis Post-Dispatch as "a beautiful present for theater-goers" and by The Daily Beast as "a brilliant show that you should see immediately," a historical a cappella musical drama All Is Calm makes its Quad Cities debut at Moline's Black Box Theatre December 8 through 17, this landmark show also praised by the New York Times as "a beautiful musical recounting of a World War I cease-fire of gifts, poetry, and melody."

With the musical written by Peter Rothstein with vocal arrangements by Erick Lichte and Timothy C. Takach, All Is Calm sets its tale on World War I's Western Front during a 1914 Christmas. Out of the violence there is a silence, and then a song, as a German soldier steps into No Man’s Land singing “Stille Nacht.” Thus begins an extraordinary night of camaraderie, music, and peace is this remarkable true story told in the words and songs of the men who lived it, and performed a cappella by a cast of nine.

Describing the inspiration for his musical, Rothstein states, "I studied World War I in high school and college, but I don’t remember reading about the Christmas Truce in any of my textbooks. If I had, I certainly would have remembered. This extraordinary event took place in 1914, the first year of the war, and was never repeated. Thousands of men put down their guns and left their trenches to meet their enemies in No Man’s Land. They exchanged gifts of tobacco, rum and chocolates; even photographs of love ones. They sang songs, played a game of soccer, and buried each other’s dead. Upon orders from above, they eventually returned to their trenches and re-instigated a war that would last four more years. So why did I not learn of this remarkable event?

"The propaganda machine of war is powerful," Rothstein continues, "and news of soldiers fraternizing across enemy lines would put a human face on the Germans and readily undermine public support for the war. The heroes of this story are the lowest of the ranks – the young, the hungry, the cold, and the optimistic. Those who acted with great courage to put down their guns, overcoming a fear that placed a gun in their hands in the first place. Their story puts a human face on war, and that’s the story I hope to tell."

“This is a very unique evening of theatre and tells a remarkable true story of Christmas Eve 1914," said Adams. "With all of the holiday concerts it was difficult to find men to audition, but I am so pleased that my cast is so enthusiastic about telling this story. I’m particularly blessed that Ron May came on board as the music director. This is a difficult piece and he’s the man to make it happen.”

All Is Calm will be staged at the Moline venue from December 8 through 17 (no show on Friday, December 16), with performances Thursdays through Saturdays at 7:30 p.m. and Sunday at 2 p.m. Admission is $13-16, and more information and tickets are available by calling (563)284-2350 and visiting TheBlackBoxTheatre.com.