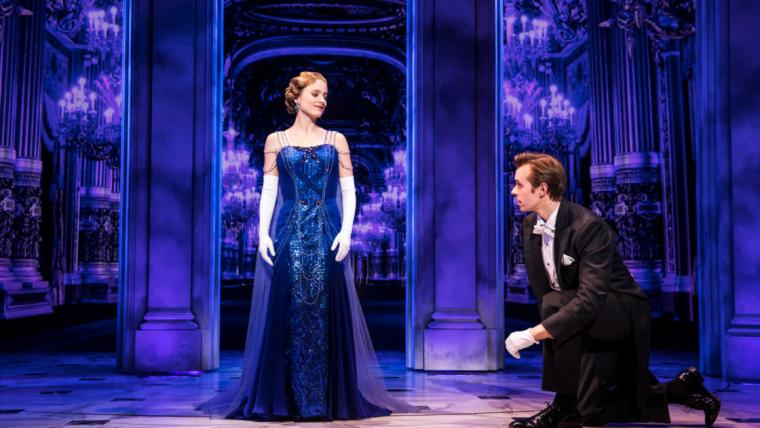 "Anastasia" at the Adler Theatre -- October 3.

With The Huffington Post deeming the show “extraordinary” and “a triumphant celebration of courage, love, and reconciliation,” the Tony-nominated musical hit Anastasia lands at Davenport's Adler Theatre on October 3, this first presentation in the 2022-23 “Broadway at the Adler” series also lauded by the Wall Street Journal as “fantastical, intelligent, well-crafted, and exhilarating.”

Based on the beloved animated movie from 1997, Anastasia is both a heartwarming and heart-wrenching dive into one of history’s biggest unanswered questions: What happened to Grand Duchess Anastasia Romanov? Set amidst the turmoil of the Russian revolution with the Bolshevik regime on the rise, Anya, an amnesiac orphan stranded in what was once the Russian capital of St. Petersburg, is on a quest to rediscover her past that she believes lies in Paris. Joined by the dashing con man Dmitry and the ex-aristocrat Vlad Popov, both of whom want to use Anya to bamboozle the only remaining Romanov – Dowager Empress Marie – into believing that Anya is the lost Anastasia, she escapes to Paris with a determined Soviet officer on their heels. Including classic songs from the motion picture such as “Journey to the Past” and “Once Upon a December,” Anastasia explores one determined girl’s journey to find home, love, and family as she discovers who she was and embraces who she is meant to be.

Featuring music and lyrics by Lynn Ahrens and Stephen Flaherty (Tony Award winners for their adaptation of Ragtime) and a book by Terrence McNally (the Tony-winning playwright of Love! Valour! Compassion! and Master Class), Anastasia premiered on Broadway at the Broadhurst Theatre in April of 2017 after completing a pre-Broadway run in Hartford, Connecticut. The show finally closed in New York on March 31, 2019, after 808 regular performances and 34 previews, and since then, it has spawned multiple productions worldwide, including in Japan, Madrid, Mexico City, and The Hague. Anastasia's current touring production is being staged based on the original direction by Tony Award winner Darko Tresnjak, with its choreography by Peggy Hickey and tour direction by Sarah Hartmann, and among the musical's numerous accolades are 13 Outer Critics Circle Award nominations, nine Drama Desk Award nominations, and a Theatre World Award for the Broadway debut of Christy Altomare in the title role.

Anastasia will be staged in Davenport on October 3, admission to the 8 p.m. performance is $43-83, and tickets are available by calling (800)745-3000 and visiting AdlerTheatre.com.