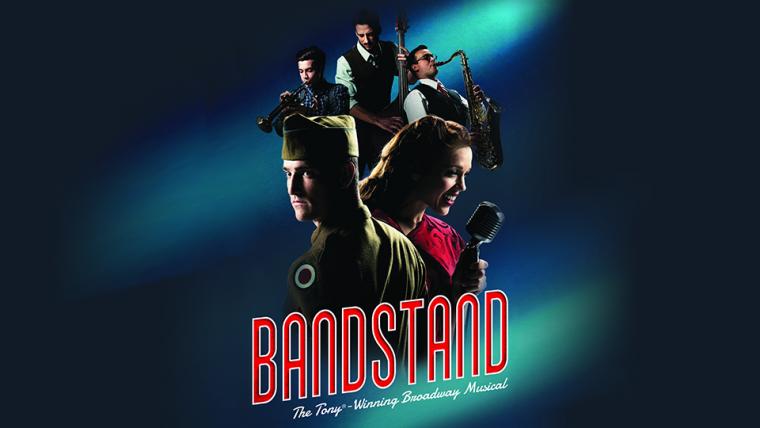 "Bandstand" at the Adler Theatre -- December 16.

With the New York Times lauding the show as “both a peppy celebration of can-do spirit and a more somber exploration of what American servicemen experienced when they marched home from World War II,” the Tony Award-winning musical Bandstand serves as the latest presentation in the Adler Theatre's Broadway at the Adler series, its December 16 staging in Davenport underscoring why Time Out New York wrote, “The show defies you not to be moved.”

The latest Broadway presentation from three-time Tony winner and Hamilton choreographer Andy Blankenbuehler, Bandstand arrived in 2017 and was hailed as a poignant and inspiring new American musical that exploded with infectious music and high-octane, heart-stopping dancing, eventually winning the Tony for Blankenbuehler's choreography. As the show opens, it's 1945, and as America’s soldiers come home to ticker-tape parades and overjoyed families, Private First Class Donny Novitski returns to rebuild his life with only the shirt on his back and a dream in his heart. When NBC announces a national competition to find the nation’s next great musical superstars, inspiration strikes for the nascent singer/songwriter, and Donny joins forces with a motley group of fellow veterans, each an astonishing musician. Together, they form a band unlike any the nation has ever seen. And along the way, they discover the power of music to face the impossible, find their voices, and finally feel like they have a place to call home.

With the New York Times calling the show “a great argument for why theatre can sometimes tell a story more boldly and more viscerally” than other mediums, Bandstand features a book and lyrics by Robert Taylor and composer Richard Oberacker. A principal player with the New York Chamber Soloists Ensemble and the Mozart Orchestra of New York, Taylor has also served as co-lyricist/librettist for a numer of new musicals including Ace Journey to the West, and The Parenting Project, while Oberacker – who music directed the Cirque du Soleil production KA in Las Vegas – recently composed the score for a new musical adaptation of The Great Gatsby that premiered in Tokyo. Blankenbuehler's Broadway credits, meanwhile, include the musicals Bring It On, 9 to 5, The Apple Tree, and the recent revival of Cats, with the artist also the choreographer behind director Tom Hooper's forthcoming film version. He has also danced on the Great White Way as a performer in shows ranging from Fosse, Contact, and Man of La Mancha to Guys & Dolls, Saturday Night Fever, and Big: The Musical.