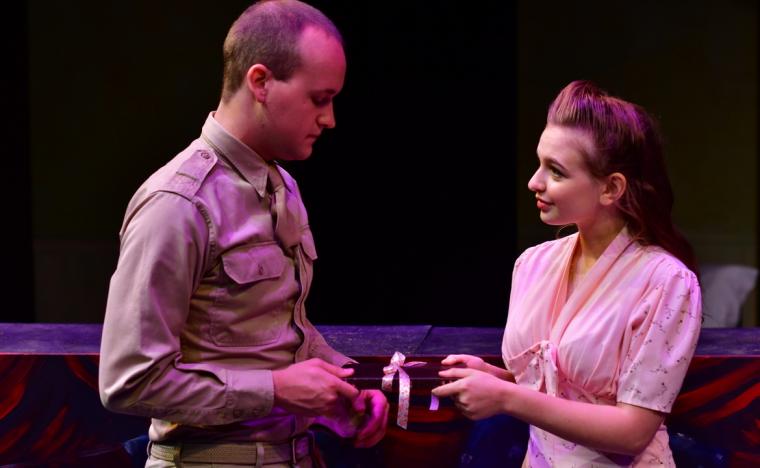 Winner of three 1985 Tony Awards including Best Play, author Neil Simon's Biloxi Blues kicks off the Mississippi Bend Players' military-themed summer season in Augustana College's Brunner Theatre Center, the comedy's June 14 through 23 run demonstrating why the Wall Street Journal deemed it “the funniest play on Broadway,” and the New York Times labeled it a “joyous and unexpectedly rewarding” entertainment in which “the laughter rarely stops.”

A riotous and moving comedy about a platoon's pitfalls, perils, and occasional pleasures during 10 weeks of basic training, Biloxi Blues is the second part of Pulitzer Prize winner Simon's semi-autobiographical trilogy that begins with Brighton Beach Memoirs (which the Mississippi Bend Players staged in 2017) and concludes with Broadway Bound. When we last met our hero Eugene Morris Jerome, he was coping with adolescence in 1930s Brooklyn. Here, he is a young Army recruit during World War II, enduring Southern heat, a harsh drill instructor, an eccentric collection of fellow soldiers, and his first time away from home – all while learning about Life and Love with capital “L”s – while stationed at boot camp in Biloxi, Mississippi. The inspiration for a 1988 Mike Nichols film starring Matthew Broderick and Christopher Walken, Biloxi Blues is one of Neil Simon's most admired and affecting entertainments, one described by Newsday as “a wonderful play by a writer tapping into his memories.”

Biloxi Blues will be performed at Augustana's Brunner Theatre Center June 14 through 23, with performances at 7:30 p.m. on Fridays and Saturdays and 2 p.m. on Sundays. Tickets are $15-20, and more information and reservations are available by calling (309)794-7306 or visiting MississippiBendPlayers.com.