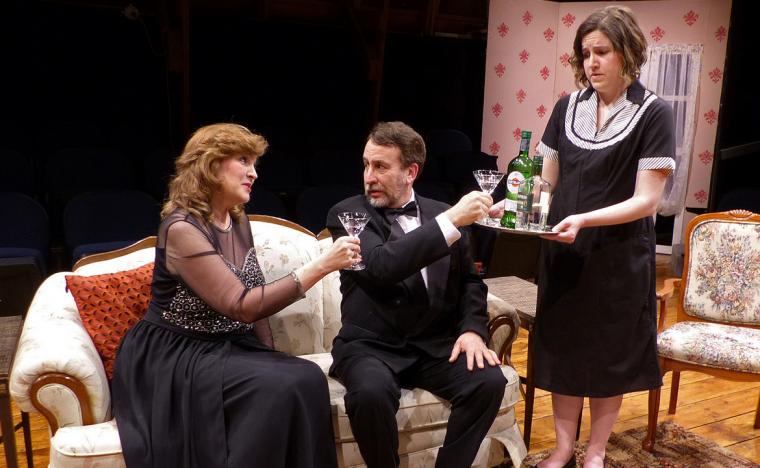 Heidi Pedersen, Gary Talsky, and Elizabeth Schaffer in "Blithe Spirit" at the Richmond Hill Barn Theatre -- May 30 through June 9.

Thursday, May 30, through Sunday, June 9

A Noël Coward masterpiece boasting period elegance, touching romance, loads of laughs, and more than a hint of the supernatural graces Geneseo's Richmond Hill Barn Theatre stage May 31 through June 9, as the British classic Blithe Spirit treats audiences to one of the most popular comedies of 20th Century world theatre, as well as the show whose most recent Broadway version won co-star Angela Lansbury her fifth Tony Award.

Coward's timeless theatrical treat that debuted in 1941, Blithe Spirit is set at the house of writer Charles Condomine and his wife Ruth. One evening, Charles invites local eccentric medium, Madame Arcati, to hold a séance at his house. He asks along his friends Dr. and Mrs. Bradman, intending to gather character inspiration from Madame Arcati for his latest book. Despite initially thinking the séance has been a failure, it soon becomes clear that Madame Arcati has unwittingly brought back Charles’ first wife, Elvira, to haunt him. Once in his house, Elvira is unable to leave and, as she cannot be seen or heard by Ruth, she causes all kinds of mischievous trouble between the married couple. In this clash of big personalities, Charles must navigate his way between two wives, creating many comical situations to a quite unexpected resolution, and in doing so, Coward's intensely funny and character-driven Blithe Spirit combines farce, emotion, and wit to powerful effect.

Directing Blithe Spirit's local presentation is area-theatre veteran Tom Morrow, whose directorial credits include Inherit the Wind, The Sunshine Boys, and The Complete Works of William Shakespeare (abridged) for Richmond Hill, Annie for Quad City Music Guild, and The 39 Steps for the Playcrafters Barn Theatre. Venue favorite Jim Driscoll (Death of a Salesman, A Few Good Men) portrays Charles, while fellow Geneseo regulars Ann Keeney-Grafft and Diane Greenwood portray Elvira and Ruth, respectively. And Blithe Spirit's other cast members include Gary Talsky and Heidi Pedersen as the Bradmans, Elizabeth Shaffer as the confused servant Edith, and Lona Friedman as Madame Arcati, the role that won Lansbury a 2009 Tony.

Blithe Spirit runs at the Richmond Hill Barn Theatre May 31 through June 9 with performances at 7:30 p.m. on Thursdays through Saturdays and 3 p.m. on Sundays. Tickets are $12, and more information and reservations are available by calling (309)944-2244 or visiting RHPlayers.com.