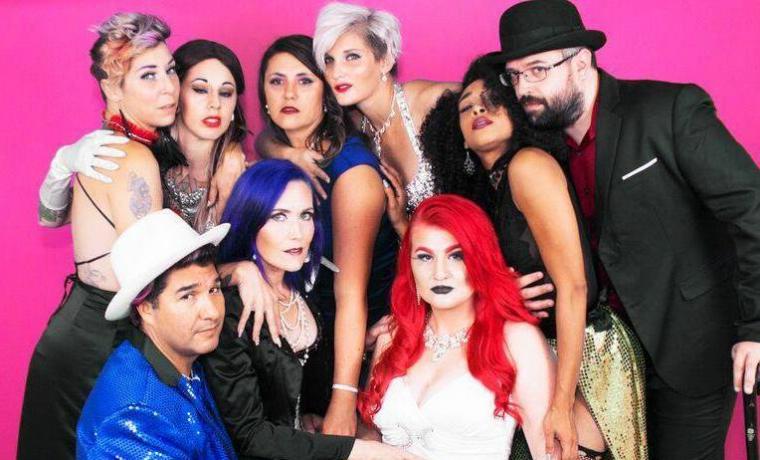 Outside the Circa '21 Speakeasy, 1818 Third Avenue, Rock Island IL

First, we planned a show. Then COVID laughed. Next, we planned an outdoor extravaganza this weekend. Then Mother Nature guffawed. Finally, we got tired of waiting for the stars to align and took our fate into our own hands! That’s right, due to the terrible forecast this weekend we have had to pull the plug on this outdoor event at the Speakeasy. However the silver lining is that Brett Hitchcock and Circa 21 have agreed that the show must go on! It will be broadcast strictly through a live stream event run by Anthony Natarelli at the One Dollar Producer Project!

Friday’s Juneteenth BU for BLM show and Saturday’s Bottoms Up Cabaret will now be available to watch from your own home for the very first time! We at Bottoms Up will still be performing on the stage you know and love but instead of being in the crowd, you can watch from your couch. Please remember that this is still full of the Rated-R Superstars you know and love so make sure the kids are in bed! Also since you’re watching us from your domicile you can’t yell at Josh to take his pants off but you don’t have to even wear pants at all if you don’t want to! So please join us for the Quad Cities FIRST EVER ALL DIGITAL BURLESQUE WEEKEND!

We miss you all terribly and were looking forward to seeing you this weekend but we all have to play the hand we’re dealt by fate. Join us on the silver lining side and help us make history in the QC!]

A longstanding, beloved Quad Cities entertainment troupe will soon be delivering distinctly 2020 performances, with the striptease artists and comedians of Bottoms Up Quad City Burlesque, on June 19 and 20, hosting live-streaming presentations of their two latest productions. With the shows taking place outside the doors of Rock Island's Circa '21 Speakeasy, the venue's portion of Third Street will be blocked off for Bottoms Up patrons at tables of four and six, and large outdoor screens will consequently stream the steamy indoor happenings.

“They're two totally different shows,” says Josh Kahn, Bottoms Up's longtime emcee and comedian who will host Saturday's performance. “Friday is our Bottoms Up for Black Lives Matter. We've essentially put all of our resources behind [Bottoms Up co-founder] Mac DeVille and helped her orchestrate a night featuring performers of color. We're gonna be donating proceeds from that show to the Black Lives Matter campaigns in the Quad Cities that are working on things in our own backyard, and Mac DeVille will be emceeing that night.

“And then on Saturday,” Kahn continues, “it's going to be a classic Bottoms Up Burlesque show – Burlesque Under the Stars – that's going to be all of your favorite Bottoms Up performers getting back on the stage after all this time. We've even got a few guests coming in – some familiar faces for our audiences. But we're gonna leave who it's gonna be as a surprise.”

Regarding the streaming process, Kahn says, “There are going to be cameras inside the Speakeasy, and they're going to project those feeds onto screens outside where everybody will be sitting. So for the entire show, you'll be just on the other side of the door from us. And the bar will still be open – they're just asking that only one person per table get the drinks so we can keep being responsible.

“The capacity outdoors is a little over 100, I want to say. It's basically the same capacity as inside the Speakeasy, but because of social-distancing guidelines from the COVID restrictions, we have to make sure people are sitting six feet apart. But also because of our social-distance guidelines, reservations for tables can only be made for groups of between four and six. And because a lot of our audience is couples, the fact that they can't just get a table for two has made it a little more difficult as far as ticket sales right now.

“But I want to encourage people to not see this as, 'Oh crap, now I have to find two more people to go with,'” says Kahn with a laugh. “So the solution I've been mentioning to people is to go to Facebook, find our event, share it to your Facebook, and maybe tag some friends that you'd be comfortable sitting with. Use the show as an opportunity to not just have a couples' night out: Make a double-date out of it. Or get some of those friends that you haven't seen in a while – or at least people you wouldn't mind spending the evening with – to be a part of something different. Don't see it as limiting.

“Everybody I've talked to that's in the performing world has had to recognize that, because of COVID, performing has changed,” says Kahn. “And so we are now coming into a time that I think is super-exciting, because people are now trying shows in ways they've never tried them before. We all have an opportunity to be part of – or at – so many firsts in the entertainment world right now. We're reinventing the wheel of entertainment.”

Both the June 19 Bottoms Up for Black Lives Matter and the June 20 Burlesque Under the Stars begin at 9 p.m., with doors to the Circa '21 Speakeasy opening at 8 p.m., and patrons must be 18 or older to attend. Admission is $18-20, reservations must be made for groups of between four and eight, and more information and tickets are available by visiting TheCirca21Speakeasy.com.