Bubbles, Bubbles, Tail, and Troubles: "The Little Mermaid," at the Timber Lake Playhouse through June 16 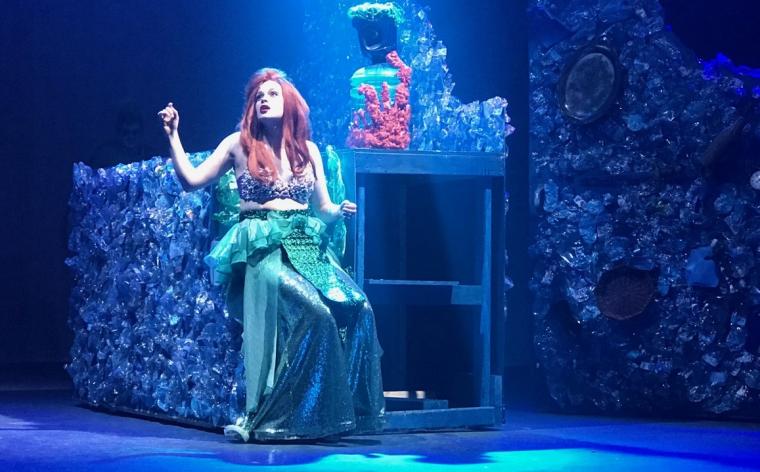 Mermaids seem to be popular with the kids nowadays. There are local advertisements for actual swim lessons in which children wear mermaid tails and are instructed on how to navigate the water. And Saturday’s matinée-under-the sea-performance of Disney's The Little Mermaid at the Timber Lake Playhouse had tiny-tyke patrons all dressed up in their mermaid tails and crowns just so they could be like their favorite princess Ariel. What a fun way to kick off the inaugural show in the theatre’s 2019 summer season!

This delightful family production was uniquely creative, with David Goldstein's scenic design incorporating all kinds of recyclable plastic jugs and various clear containers to simulate sparkling bubbles in the water. Based on Hans Christian Andersen's adored story and Disney's classic animated film, The Little Mermaid’s music by Alan Menken lyrics by Howard Ashman and Glenn Slater were perfect for the children to sing along with. The kids in the crowd also had the opportunity to purchase their own toy Triton sword (complete with blinking strobe light), and bubbles were on sale for anyone who wanted to partake during specific scenes.

Anna Catherine Smith was an authentic-looking Ariel with her long, flowing auburn hair and radiant glow. At the show's start, she was tethered to a high wire and hoisted upward so she could “swim” across the stage, and there was also a cool, translucent backdrop sheet that she swam behind that added another layer to the water effect. Throughout the performance, in fact, several actors were wire-flying to simulate swimming or floating, which added to the magic of the production. Being seated in the second row, however, I could clearly see behind a rather large gap in a side curtain that allowed me to notice the “Exit” sign over the back door, as well as actors coming and going. (That wasn’t so magical.)

Conor Jordan's Prince Eric was dreamy and had solid vocal technique, but he also seemed disconnected, seldom making eye contact with the audience. And while Smith displayed a fantastic voice, Saturday’s matinée, unfortunately, was full of microphone problems and feedback that took away from the quality of the entire performance. All of the actors, though, did well with their swaying body motions that mimicked being under a body of water, and the choreography by director Paul Stancato was exceptional and well-executed.

The lighting design, compliments of Joe Cantalupo, really made the show for me, with its blue and purple hues and shimmering effects that made the water look like it was actually moving. Mitchell Snow, meanwhile, was extremely creative in his props design, using swimming-pool noodles that were painted green to replicate seaweed, and at one point, having a couple of actors come out on skateboards holding jellyfish on sticks. In another scene, Ariel was in a bathtub with large pieces of bubble wrap simulating soap bubbles.

Ariel's pal Flounder (Morgan Arrivillage) was dressed in a bright-yellow/blue-green one-piece suit by costume designer Zandra Siple, and the little fishy also had colorful, spiky punk-rock hair that was super cute. Sebastian the crab (Jean Christian Barry) was charming in his bright-red ensemble complete with long coat tails and sequin shoes, and I enjoyed the green eels Flotsem (Ben Dow) and Jetsom (Rory Schrobilgen), whose costumes even lit up with some sort of fiber optics as they nailed their dance moves and slithered about the stage. Scuttle (Logan Dolence), the tap-dancing bird, was spunky, but could have been a little more demonstrative.

Chef Louis (James Tweedale), in my opinion, stole the show's second act with his fabulous bicycle mustache and elaborate acting, and his comedic timing was outstanding in his solo performance “Les Poissons.” At one point during the palace banquet scene, there was a table with three trays covered with lids, and the heads of different actors would pop out of the table as Chef lifted the lids. The children in our audience found that bit especially hilarious.

Rachel Davenport was convincing in her role as the evil sea witch Ursula, belting out such songs as “I Want the Good Times Back” and “Poor Unfortunate Souls.” She also had a great look, with a costume that included the long arms of an octopus and black netting for gloves, and sparkling makeup, her purple face and white, glittery eyeshadow by the credit of makeup designer Jasmine Elam.

With its run time of slightly over two-and-a-half hours, I felt like the show was a bit long for both me and the toddlers among us who were (understandably) getting restless. Yet the Timber Lake Playhouse’s The Little Mermaid was certainly entertaining in all of its color and creativity – even if Saturday afternoon's technical difficulties made the performance a little disappointing just the same.

The Little Mermaid runs at the Timber Lake Playhouse (8215 Black Oak Road, Mt. Carroll) through June 16, and more information and tickets are available by calling (815)244-2035 or visiting TimberLakePlayhouse.org.