Can't Fight This Feeling: “Rock of Ages,” at the Black Box Theatre through August 19 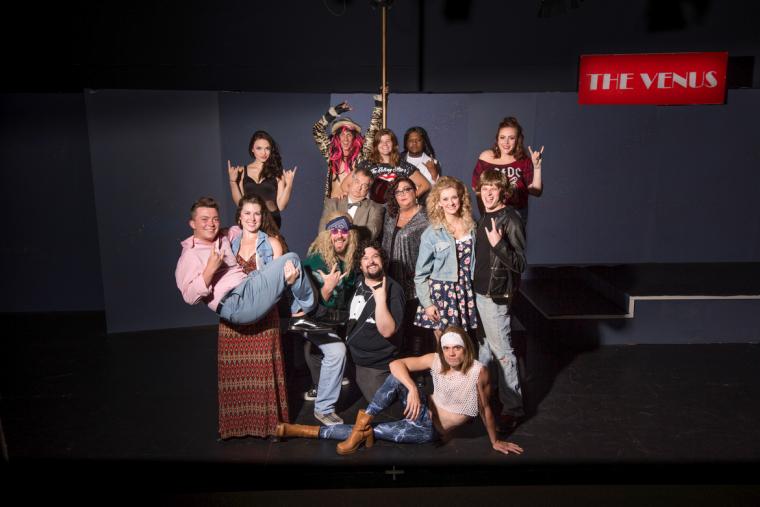 the Rock of Ages ensemble

Given its completely sold-out run, it’s hard to say that you should rush to get your tickets to see the Black Box Theatre’s production of Rock of Ages. But for those lucky enough to have tickets – or to find some way to get them – you're in for a good time.

For this child of the '80s, the greatest-hits musical Rock of Ages was like a trip down Memory Lane, as the show's many rock and pop classics from that era brought back a rush of nostalgic feelings. Director David Miller's production brought a large cast to a small space, with lots of fun moments that I was not really expecting, and music director Kyle Schneider assembled an amazing house band that included himself, Pete Letendre, Dan Kitsis, and Mark McGinn. At the August 10 opening-night performance, they sounded like they'd been playing together for years (and according Miller, this four-piece ensemble that plays everything from Quiet Riot to Journey sounded this good from the first rehearsal).

Becca Johnson plays Sherrie Christian, a small-town girl who moves to Los Angeles with dreams of making it big, and the performer was a vocal powerhouse all night long. Her talents especially shined on the mash-up “More Than Words/To Be with You,” but Johnson shows that she's more than just a strong voice when her acting talents really come through on the song “Harden My Heart,” in which she sings about a love gone bad. 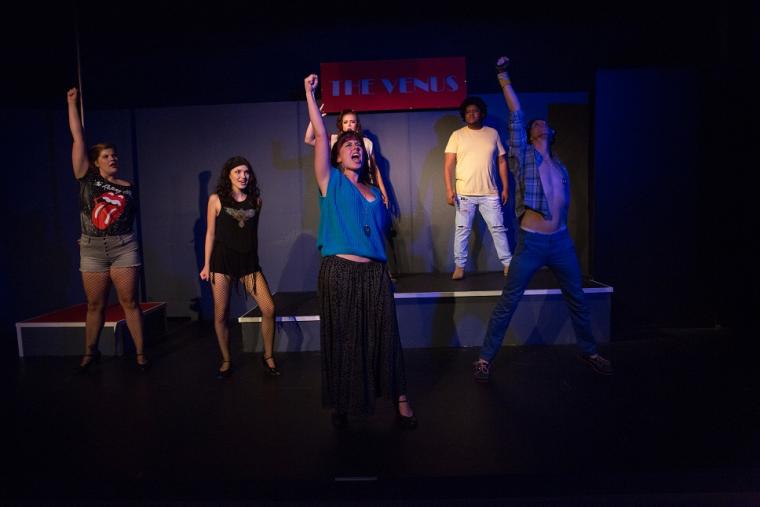 Even though both Sherrie's storyline and the entire musical's narrative take a back seat to the great music, Rock of Ages has a plot that works – your classic tale of rural girl moves to big city, girl falls for boy, boy does something stupid, both learn things and end up together. And Thursday's entire evening had a very loose feel to it much like a Rocky Horror Show experience, complete with a funny German character.

The person responsible for that loose feel is Rock of Ages narrator Lonny, played impeccably by Joe Maubach, whose line deliveries had a great flow as he bantered with the audience. Even when the goings-on seemed to be improvised, as when one audience member yelled out “You’re killing it!”, Maubach, with the audience cheering, reveled in the moment for a perfect amount of time before moving on. There was even an instance on Thursday in which Maubach leaped backward on-stage when we (audibly) realized he wasn’t in his light, which was very funny … even if it may have just been a technical error, as there were a lot of moments that found actors singing in darkness. (Hopefully, this was an opening-night lighting issue that was solved as the run continued.)

Drew Boley (Andy Sederquist) is Sherrie’s love interest and has dreams of making it as a rock star. While the character has high hopes, he also has high notes – so high that they seemed to be just slightly out of Sederquist’s range, making his '80s-rock scream sound a little strained. And Aaron Lord plays the flamboyant Franz – son of money-hungry developer Hertz (Dave Meumann) – and his performance left quite the impression, especially when he suddenly, unexpectedly, and hilariously stripped down to a leotard. (The whole audience was in stitches for a good two minutes.) Lord’s whole performance showed off a lot of great comedic timing, as did Meumann's, both of whom played off of each other nicely. 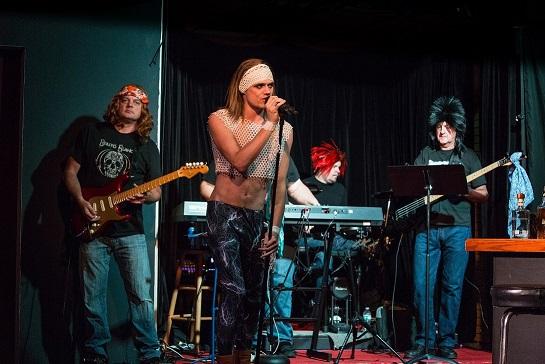 The always-enjoyable Brant Peitersen is hippie bar owner Dennis Dupree, who delivers lots of terrific one-liners, while Anthony Natarelli embodies the cocky front man Stacee Jaxx, and it was enjoyable to watch the rocker's entire career do such a downward spiral that he literally ends up in the toilet.

Rounding out the collection of characters are Regina (Joanna Mills), the mayor’s assistant-turned-activist; the Mayor (Adam Cerny) himself, who gets talked into selling classic-rock bars for new developments; Ja’Keith (Keenen Wilson), the dreadlocked music producer; news reporter Constance Sack (Haley Teel); the requisite Groupie (Sydney Dexter); and, as she's referred to in the show, Waitress #1 (Madison Duling). In total, this Rock of Ages features a 14-member cast with four band members on-stage – a lot of people for the intimate Black Box, but it never felt like too many. In truth, it was the full-cast numbers that really stood out to me as being the production's strongest, with kudos to director Miller for choreographing what I’m sure were confusing backstage traffic patterns given so many bodies and so little space.

Rock Of Ages made for a very enjoyable evening complete with big characters, big voices, and very big hair, leaving us with a rocking rendition of “Don’t Stop Believing” that literally had the whole audience on its feet. Here’s hoping you already got your tickets – or know how to score them.

Rock of Ages runs at the Black Box Theatre (1623 Fifth Avenue, Moline) through August 19, and more information and tickets are available by calling (563)284-2350 or visiting TheBlackBoxTheatre.com.