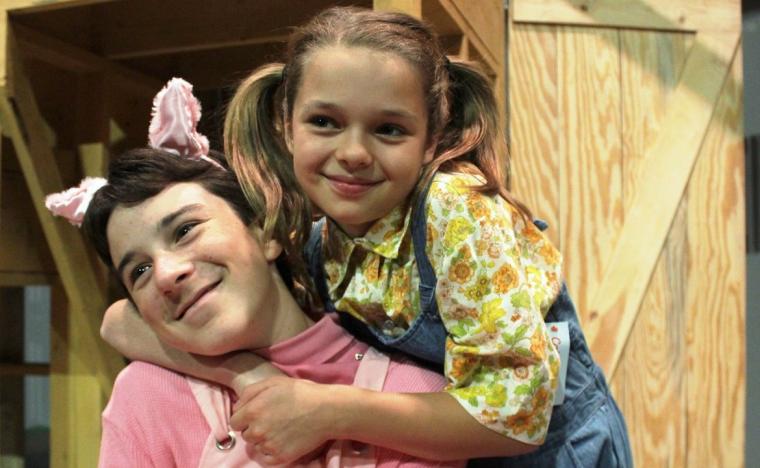 The beloved tale of a pig, a spider, and a timeless storybook friendship kicks off Davenport Junior Theatre's 67th season with the October 13 through 21 presentation of Charlotte's Web, the 1952 children's book by E.B. White now being brought to stage life in a colorful, fun-filled production involving more than 40 students from 11 different area cities.

When praising Charlotte's Web in the New York Times, author Eudora Welty described it as “a book about friendship on earth, affection, and protection, adventure and miracle, life and death, trust and treachery, pleasure and pain, and the passage of time,” adding that White's work was “just about magical.” Welty's description touches on the themes, heartfelt storytelling, and beloved characters of a classic that continues to capture the minds and imaginations of children, and since its first publication, White's book has sold more than 45 million copies, has been translated into 23 languages, and has been made into several film adaptations. In 1970, the novel also earned White the Laura Ingalls Wilder Medal, one of the highest honors in children's literature.

“The story of Charlotte's Web is incredibly important,” says the show’s director Calvin Vo, a Davenport Junior Theatre instructor who also helmed the Peter Pan saga Peter & the Starcatcher for the QC Theatre Workshop. “From this story, we all learn about the importance of friendships and how they can change our lives, the virtue of advocacy and compassion towards those in need, and the value of each person's unique perspective and identity.”

Included among Charlotte's Web's vast cast of student actors are Croix Baker as the endearing pig Wilbur, Hannah Highberger as his human friend Fern, and Alana Ford as the loving spider Charlotte. Says Davenport Junior Theatre's Artistic Director Daniel Sheridan of the play's 1952 inspiration, “It is a story that has stood the test of time. Junior Theatre started in 1951, and we like to think we are a children’s theatre that has stood the test of time, too. Hopefully, we have been radiant and humble along the way, just like Wilbur and Charlotte.”

Charlotte's Web will be presented October 13 through 21, with performances at 1 and 4 p.m. on Saturdays and Sundays, and admission $6-8 at the door. For more information, call (563)888-2227 or visit DavenportJuniorTheatre.com.