Cheery Jubilee: “The Happy Elf,” at the Spotlight Theatre through December 9 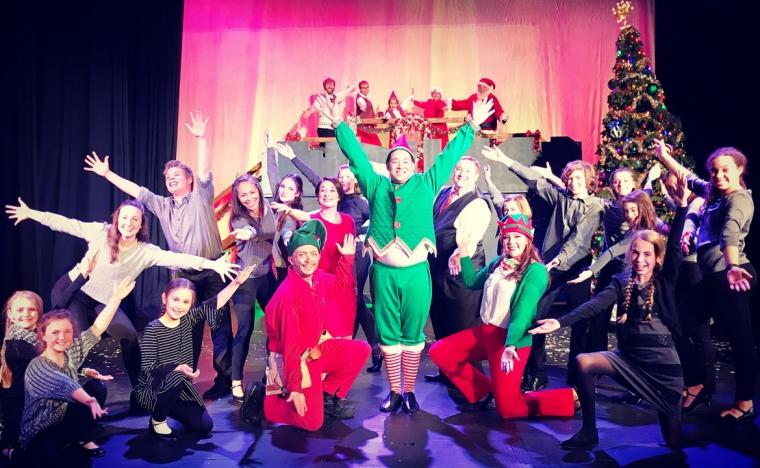 Gary Mayfield and company in The Happy Elf

Before the start of Tuesday night's dress rehearsal for the Spotlight Theatre's The Happy Elf, there was a little bit of pre-holiday spirit in the air, with various cast members' children and siblings laughing and playing in the aisles, enjoying candy canes and cookies. However, once the performance started, they were as quiet as (dare I say it?) church mice. This may be the best indication of the musical's ability to hold the interest of a young audience.

Composer/lyricist Harry Connick Jr.'s musical, with its book by Lauren Gunderson and Andrew Fishman, centers on Eubie (Gary Mayfield), an overly enthusiastic elf hoping to be picked for Santa's Christmas Eve sleigh team along with BFFs Hamm (Aaron Lord), a scruffy sleigh mechanic, and Gilda (Madison Duling), an allergy-ridden reindeer intern with an uncanny knack for sneezing in people's faces. After being demoted to the Naughty and Nice Department for being too … well, happy, Eubie learns of Bluesville, a town where everybody is perpetually on the “naughty” list. In an effort to get back in Santa's good graces, the elf decides to go to Bluesville to turn the children from “naughty” to “nice” in time for Christmas.

As it turns out, though, Bluesville is a town so-o-o-o low it only sees sunlight for 23 seconds a day. (Talk about a year-long Seasonal Affective Disorder!) Here, he meets Mean Girl in Training Molly (Marley Haley), the neglected daughter of workaholic Mayor (Chris Tracy) and music-store owner Gurt (Sara Tubbs), whose specialties include snuggies and snarky comments. With mere hours to spare, Eubie (with help from Hamm and Gilda) must convince Molly and all the other Bluesville folk that Santa is real and Christmas is indeed the happiest day of the year. 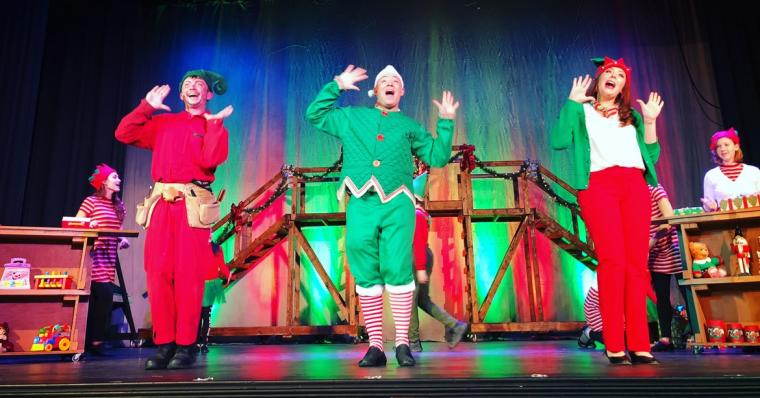 Even though I was witnessing a dress rehearsal, I was impressed with the overall energy of the Happy Elf cast (although there were a few exceptions). This was especially true of Mayfield, Lord, and Duling, whose song “Three” reminded me of one of the old Bing Crosby/Bob Hope Road to... movies. Also of note was Tracy, whose full, rich baritone on the song “Bluesville” was one of the evening's vocal highlights.

It was apparent from the score's opening chords that this is not your typical Broadway fare. Connick's big-band jazz score was at times refreshing, but also sometimes incongruent with the general parameters of a children's show. Take, for example, “The Poop Hole Song.” Don't get me wrong: I'm a big fan of the word “poop.” But the song's only purpose is to get a cheap laugh from pre-adolescent children. And in light of the recent controversy over the term “s---hole countries,” the song actually made me feel a little uncomfortable.

The Spotlight Theatre is a rather large venue, and director Becca Johnson makes good use of it by having her actors utilize various entrances during the course of the performance. I couldn't keep myself from smiling during “The Wow Song,” in which cast members ran through the main floor encouraging audience members to participate in the song's refrain.

Kudos must also be given to choreographer Christianna Crosby, who managed to keep the dance moves interesting and engaging while keeping in mind the cast's collective skill level. This was especially apparent in the opening number that found the entire cast executing complex dance moves with vigor and enthusiasm (if not perfection). 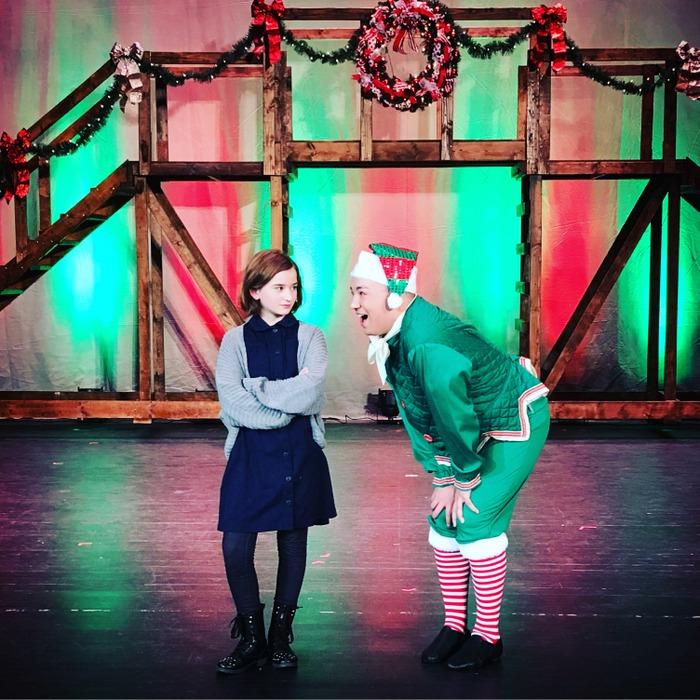 Not that there weren't some inherent problems with Tuesday's performance. Even allowing for the typical lighting and mic problems one might expect during a dress rehearsal, I found it difficult to hear and/or understand the ensemble choral parts, and at times the singers seemed a little out of time with each other, especially during the a cappella rendition of “Pole Leaders.”

There are some troubling issues with the storyline as well, even for a children's musical. The show's overall theme is summed up in the following poem: “Everyone's got good inside / Happiness should never hide / Christmas time is yours and mine / So let your 'happy' rise and shine.” Two questions: Should the people of Bluesville been put on the perpetual “naughty” list just because they live in a poop-hole town that never gets any sunlight? And did the people of Bluestown suddenly get rich because they finally got the Christmas spirit, or did they get the Christmas spirit because they found out they were suddenly rich?

Either way, I doubt the children in the audience will care, and at the end of the day, The Happy Elf is a jazzy little holiday romp suitable for the whole family. Is it destined to become the next big “holiday classic”? Probably not. But it does offer some first-class performances and a refreshing change of pace from the season's myriad holiday-movie musical spin-offs.

The Happy Elf runs at the Spotlight Theatre (1800 Seventh Avenue, Moline) through December 9, and more information and tickets are available by calling (309)912-7647 or visiting TheSpotlightTheatreQC.com.