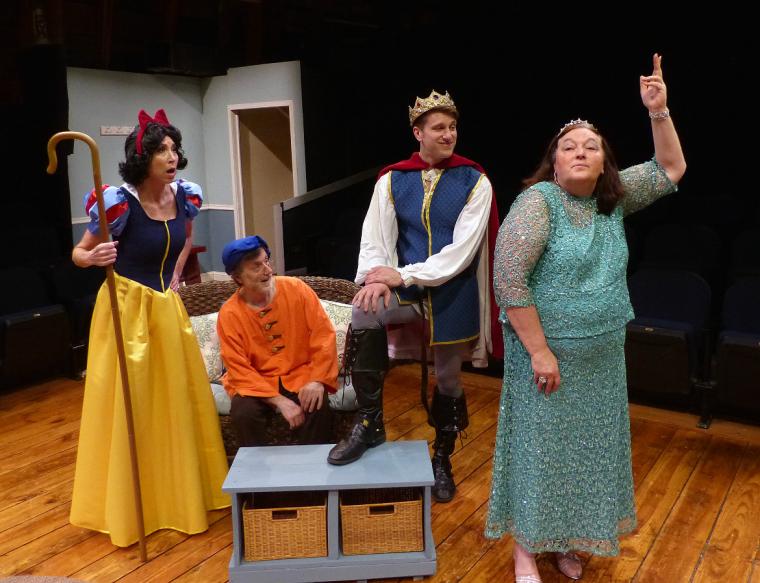 I love Christopher Durang, and was very much looking forward to his 2013 Tony Award winner Vanya & Sonia & Masha & Spike, currently in production at the Richmond Hill Barn Theatre. Durang has been a successful playwright for more than 40 years, and although this comedy is less edgy and absurd than previous plays, and although I felt Durang’s writing went off-track in the second act, Friday’s production provided many laugh-out-loud, wiping-tears-away moments. I have not felt so just-plain-happy being in the theatre in quite a long time.

Director Jennifer Kingry has assembled a fine cast, and her directorial strengths were evidenced in the show’s bright, quick pacing and fine choices she made in guiding the production. The story centers on three siblings: Vanya (Tom Vaccaro) and his sister Sonia (Jackie Skiles), who have remained at home to care for their now-deceased parents, and their sister Masha (Heidi Hamer), whose acting career has paid the family’s bills. Vanya and Sonia clearly feel they've gotten the raw end of the deal and that their lives have gone nowhere, and in their first scene, there were occasional moments in which I was more aware of actors than believable characters. Was this because Vaccaro and Skiles were thinking about lines rather than their stage relationship? Or possibly because, due to where I was sitting, the in-the-round staging found them both in chairs and me facing the backs of their heads? Whatever the reason, as the play progressed, I let go of all reservations. I could invest in Vaccaro because he has a lovely stage presence with an earnestness and easygoing charm, and in Stiles because of her varied, sometimes surprising line deliveries. As the plot developed, it was clear that the audience was certainly invested in her character. During a telephone monologue in which she turned down a prospective date for dinner, the audience let out a collective sigh of disappointment that was wonderful to hear. But the Skiles highlight for me involved Sonia dressed (for a costume party) as Maggie Smith on her way to the Oscars, a scene that was pure comic brilliance both as written and performed. Bravo and brava!

For Vanya, Hamer has returned to the stage after a 14-year absence, and I’m sure the audience would agree that it’s a most welcome return. With her refreshing, light approach and ability to deliver witty repartee with fine comic timing, Hamer carries off her self-obsessed-diva role with aplomb. Masha’s unexpected weekend visit sets the plot in motion with her announcement that she is going to sell the family home, and joining her is her stud-muffin boyfriend Spike. Victor Angelo is just right in portraying this not-too-bright young actor, and although the scene in which he describes his audition for a role in Entourage 2 is pretty funny, it's his outrageous reverse-striptease that really brings down the house.

As is his wont, Durang makes many references to pop culture and the literary world, including Chekhov’s plays (which one certainly does not have to know in order to enjoy this show). But he also references Greek tragedy via the character of the psychic housekeeper Cassandra, played by an absolutely hilarious Pamela Briggs. Her (fittingly) over-the-top facial and vocal expressions are enhanced by a deep Russian accent as she issues warnings about the Trojan Horse and the man with a pocketful of Trojans. Briggs is the perfect medium for channeling Durang’s wacky absurdity, and not long after her introduction, all she had to do was appear on stage to get me laughing. Rounding out the cast is Adrienne Evans as the ingenue Nina, who, while starstruck by Masha, turns out to be Masha’s perceived rival for Spike’s affections. Evans, a United Township High School student, is a very capable actress and delightful to watch, particularly inVanya’s play-within-a-play wherein she attempts to portray a molecule. Yes, a molecule. This is Durang, remember?

Alas, if only Durang had remembered himself! It's at this juncture of the show that he inserts a long Vanya rant about the decline of post-modern culture – a point at which Durang's writing went completely off the rails for me. It was like switching TV channels in the middle of a program. Then the playwright makes another false step, employing the “god from the machine” and artificially contriving one character’s change of heart in order to bring about a satisfactory resolution to the story.

However, the ending we are presented with does satisfy, and despite its disappointments, Durang’s wonderful wit and our own local-grown talent provide more than enough reasons to put Vanya & Sonia & Masha & Spike on your must-see list.