“The Children's Hour,” December 6 through 9 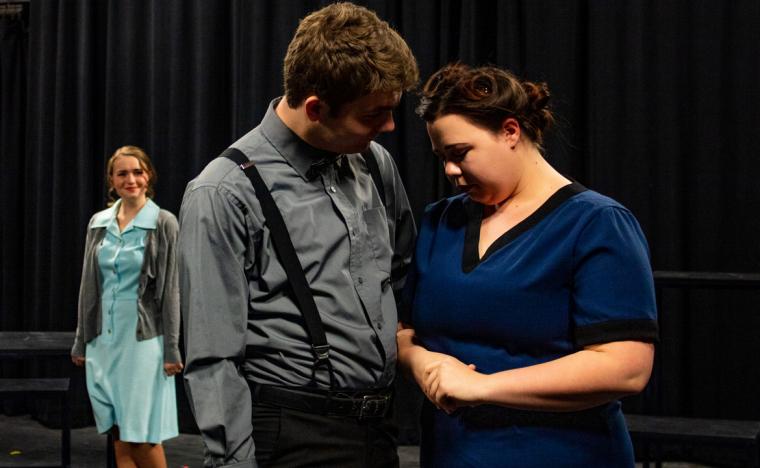 Katie Griswold, AJ Weber, and SophiaRose Brown in “The Children's Hour" at Augustana College -- December 6 through 9.

An American stage drama as powerful, affecting, and deeply relevant today as it was in its 1934 debut, Lillian Hellman's classic The Children's Hour will be produced in Augustana College's Brunner Theatre Center December 6 through 9, its tale of clandestine love and small-minded bigotry standing as a haunting reminder of the continued horrors of intolerance.

Set in a fictional New England town in the 1930s, The Children’s Hour tells the story of Karen Wright and Martha Dobie, teachers at an all-girls boarding school who are accused of homosexual activity by young student Mary Tilford. Prompted by the influential Amelia Tilford – an upstanding member of the community who also happens to be Mary's indulgent grandmother – the outraged townsfolk quickly withdraw all of their students from the school, causing a witch hunt that ultimately forces the institution to close. Martha and Karen consequently take the accusations to court in a libel suit and find their lives quickly unraveling as they become social pariahs, resulting in a theatrical masterpiece that was both in consideration for the 1934-35 Pulitzer Prize and led to the Hollywood blacklisting of author Hellman.

The Children's Hour runs December 6 through 9 at Augustana's Honkamp Myhre Black Box Theatre in the Brunner Theatre Center, with performances Thursday through Saturday at 7:30 p.m. and Sunday at 1:30 p.m. Admission is $5-10, and more information and tickets are available by calling (309)794-7306 or visiting Augustana.edu.