“A Christmas Carol,” December 9 through 17 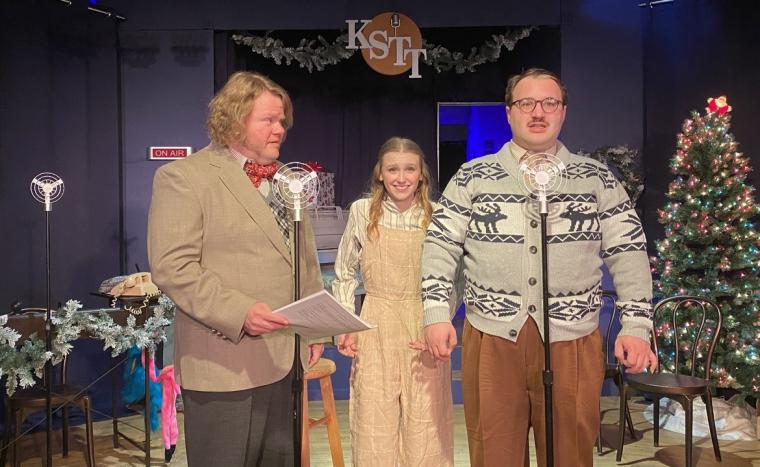 Jeremy Littlejohn, Taylor Lynn, and Bradley Robert Jensen in “A Christmas Carol" at the Mockingbird on Main -- December 9 through 17.

A familiar holiday tale will enjoy a novel retelling at the Mockingbird on Main from December 9 through 17, with the Davenport theatre hosting a new version of Charles Dicken's timeless yuletide story A Christmas Carol performed by a three-person cast in an abridged, radio-comedy format.

As the show begins, it’s time for KSTT Davenport’s annual radio presentation of A Christmas Carol, but sadly for performers and listeners alike, a snow storm is about to ruin everything. If something can go wrong, it probably will as two former vaudeville stars and a frazzled stage manager stumble to finish the world’s most beloved holiday tale. Written and directed by Mockingbird co-founder Tristan Tapscott (a current castmate in the Circa '21 Dinner Playhouse's Irving Berlin's White Christmas) and frequent venue performer Doug Kutzli (Murder at Mistwell Manor, Deck the Halls: A Holiday Musical), this debuting production will feature the comedic stylings of Jeremy Littlejohn (Circa '21's Clue: The Musical), Bradley Robert Jensen (the Circa '21 Speakeasy's The Rocky Horror Show), and Taylor Lynn (the Mockingbird's fall drama Their Town).

With its story familiar for generations, Charles Dickens' A Christmas Carol recounts the tale of Ebenezer Scrooge, an elderly miser who is visited and eventually redeemed by the ghost of his former business partner Jacob Marley and the spirits of Christmas Past, Present, and Yet to Come. Dickens wrote his holiday novella during a period in which the British were exploring and re-evaluating past yuletide traditions such as carols, as well as newer customs including Christmas cards and Christmas trees. Influenced by the experiences of his own youth and by the Christmas stories of such authors as Washington Irving and Douglas Jerrold, Dickens had written three Christmas stories prior to A Christmas Carol. He found inspiration for his most famous work, though, following a visit to the Field Lane Ragged School, one of several establishments for London's street children.

Published on December 19, 1843, the first edition of Dickens' A Christmas Carol sold out by Christmas Eve, and by the end of 1844, 13 editions had been released. Most critics reviewed the novella favorably, and when the story was illicitly copied in January of 1844, Dickens took legal action against the publishers; they went bankrupt, and further reduced Dickens' already-meager profits from the publication. In 1849, however, the author began public readings of the story, which proved so successful that Dickens undertook 127 further performances until 1870, the year of his death. Since its debut 179 years ago, A Christmas Carol has never been out of print and has been translated into several languages, with its story having been adapted many times for film, stage, opera, radio, and other media.

A Christmas Carol runs in downtown Davenport from December 9 through 17, with performances on Fridays and Saturdays at 8 p.m. Admission is “pay what you can” ticket pricing, and more information and reservations are available by visiting TheMockingbirdOnMain.com.