“A Christmas Carol on the Radio (well, really on stage),” December 2 through 12 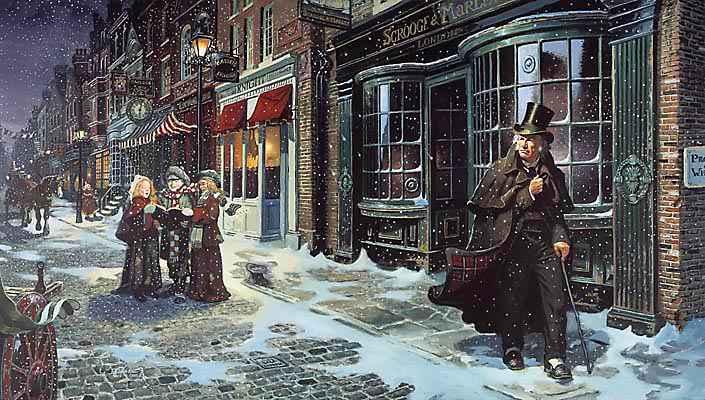 “A Christmas Carol on the Radio (well, really on stage)" at the Black Box Theatre -- December 2 through 12.

A 178-year-old holiday perennial will be presented in a brand-new old-timey way from December 2 through 12 when Moline's Black Box Theatre presents its debut of A Christmas Carol on the Radio (well, really on stage), a sincere yet cheeky interpretation of Charles Dickens' beloved yuletide classic staged in the style of a 1940s audio-drama.

With its story familiar for generations, Dickens' A Christmas Carol recounts the tale of Ebenezer Scrooge, an elderly miser who is visited and eventually redeemed by the ghost of his former business partner Jacob Marley and the spirits of Christmas Past, Present, and Yet to Come. Dickens wrote his holiday novella during a period in which the British were exploring and re-evaluating past yuletide traditions such as carols, as well as newer customs including Christmas cards and Christmas trees. Influenced by the experiences of his own youth and by the Christmas stories of such authors as Washington Irving and Douglas Jerrold, Dickens had written three Christmas stories prior to A Christmas Carol. He found inspiration for his most famous work, though, following a visit to the Field Lane Ragged School, one of several establishments for London's street children.

Published on December 19, 1843, the first edition sold out by Christmas Eve, and by the end of 1844, 13 editions had been released. Most critics reviewed the novella favorably, and when the story was illicitly copied in January of 1844, Dickens took legal action against the publishers; they went bankrupt, and further reduced Dickens' already-meager profits from the publication. In 1849, however, the author began public readings of the story, which proved so successful that Dickens undertook 127 further performances until 1870, the year of his death. Since its debut 178 years ago, A Christmas Carol has never been out of print and has been translated into several languages, with its story having been adapted many times for film, stage, opera, and other media – including, as in its Moline presentation, radio formats.

Directing A Christmas Carol on the Radio for the Black Box is the venue's co-founder and artistic director Lora Adams, who performed in this summer's Murder in Green Meadows and whose 2021 directorial offerings for the theatre include The Guys, Hate Mail, Love, Loss, & What I Wore, and Dick Tracy: A Live Radio Play. Dickens' unforgettable characters are portrayed by a veritable Who's Who of familiar area performers: Adrienne Jane Evans (the Playcrafters Barn Theatre's Princeton's Rage), Dee Canfield (the Black Box's I Never Saw Another Butterfly), Patti Flaherty (Playcrafters' Steel Magnolias), Scot Gehret (the Prenzie Players' The Revenger's Tragedy), Patrick Gimm (the Village Theatre's The Gift of the Magi), Scott Tunnicliff (Playcrafters' You Can't Take It with You), and Matt Walsh (the Black Box's Hate Mail). And with the show presented in the style of an old-fashioned radio show, with performers reading from scripts and Dickens' holiday tale augmented by homemade sound effects occasional “words from our sponsor,” Renaud Haymon (Playcrafters' The Piano Lesson) acts as A Christmas Carol's announcer, Wendy Czekalski (the Black Box's Company) and Kayla Jo Pulliam Mendoza (the Black Box's The Turn of the Screw) sing commercial jingles, and Tom Vaccaro (Quad City Music Guild's A Chorus Line) serves as the resident foley artist in charge of the play's sound effects.

A Christmas Carol on the Radio (well, really on stage) runs December 2 through 12, with performances Thursdays through Saturdays at 7:30 p.m. (no show on December 4) and Sundays at 2 p.m. Admission is $13-16, and more information and tickets are available by calling (563)284-2350 and visiting TheBlackBoxTheatre.com.