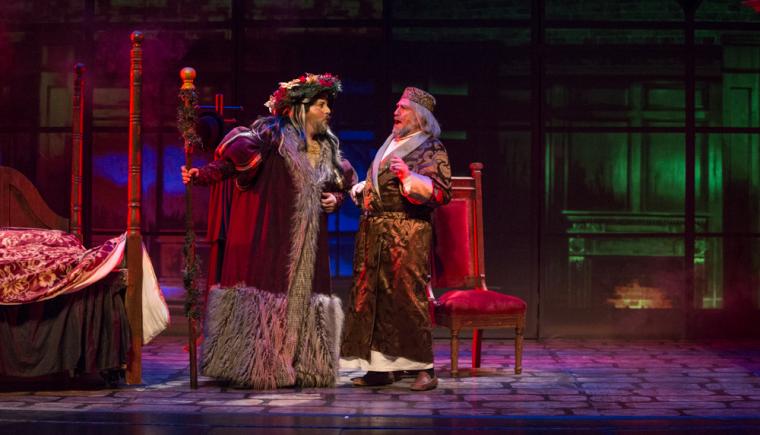 “A Christmas Carol" at the University of Dubuque -- December 5.

Holiday-minded audiences at the University of Dubuque's Heritage Center will have no reason to cry “Bah, humbug!” on December 5, given that the university's John & Alice Butler Hall will be transformed into a magical, Dickensian wonderland for Perseverance Productions' touring musical presentation of the yuletide classic A Christmas Carol.

With its story familiar for generations, Charles Dickens' A Christmas Carol recounts the tale of Ebenezer Scrooge, an elderly miser who is visited and eventually redeemed by the ghost of his former business partner Jacob Marley and the spirits of Christmas Past, Present, and Yet to Come. Dickens wrote his holiday novella during a period in which the British were exploring and re-evaluating past yuletide traditions such as carols, as well as newer customs including Christmas cards and Christmas trees. Influenced by the experiences of his own youth and by the Christmas stories of such authors as Washington Irving and Douglas Jerrold, Dickens had written three Christmas stories prior to A Christmas Carol. He found inspiration for his most famous work, though, following a visit to the Field Lane Ragged School, one of several establishments for London's street children.

Published on December 19, 1843, the first edition sold out by Christmas Eve, and by the end of 1844, 13 editions had been released. Most critics reviewed the novella favorably, and when the story was illicitly copied in January of 1844, Dickens took legal action against the publishers; they went bankrupt, and further reduced Dickens' already-meager profits from the publication. In 1849, however, the author began public readings of the story, which proved so successful that Dickens undertook 127 further performances until 1870, the year of his death. Since its debut 179 years ago, A Christmas Carol has never been out of print and has been translated into several languages, with its story having been adapted many times for film, stage, opera, radio, and other media.

Adapted and directed by Clayton Phillips, whose award-winning directorial credits include directing Kiss of the Spider Woman, Cabaret, and Chicago, the University of Dubuque's touring production of this ever-popular classic fills the stage with a cast of 16 professional actors, lush costumes, stunning sets and puppetry, song and dance, a heavy dose of humor, and a timeless message. Twenty-six beloved traditional carols of the season are also woven throughout this original adaptation by the East Coast team at Perseverance Productions, which, as stated on the group's Web site, "has been of spreading cheer across the country from our home base in New Hampshire for several years now. We only know only one way to tell this great theatrical tale – with 100-percent commitment, passion, humor, and dedication. As the British writer Samuel Johnson wrote: 'Great works are performed not by strength, but by perseverance.'"

A Christmas Carol's national tour comes to the University of Dubuque's Heritage Hall on December 5, admission to the 7:30 p.m. performance is $31-49, and more information and tickets are available by calling (563)585-7469 and visiting Dbq.edu/HeritageCenter.