“A Christmas Story: The Musical,” December 18 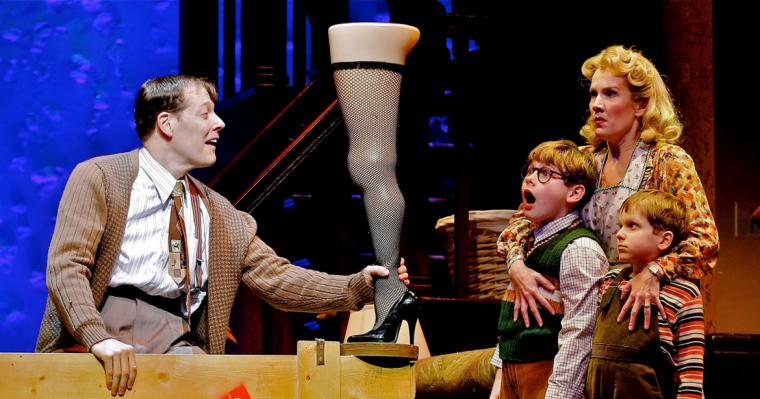 “A Christmas Story: The Musical" at the Adler Theatre -- December 18.

Nominated for three 2013 Tony Awards including Best Musical and described by Broadway World as “a twinkling Christmas delight,” the eagerly awaited touring production A Christmas Story: The Musical lands at Davenport's Adler Theatre on December 18, its score by the Oscar- and Tony-winning team of Benj Pasek and Justin Paul inspiring the New York Times to write, “You'd have to have a Grinch-sized heart not to feel a smile spreading across your face.”

Based on the 1983 film classic and set in the fictional town of Hohman, Indiana, in the 1940s, A Christmas Story: The Musical follows nine-year-old Ralphie Parker and his quest for the Holy Grail of Christmas gifts: an Official Red Ryder carbine-action 200-shot Range Model air rifle. Rebuffed at every turn with a similar echoing response, Ralphie plots numerous schemes to achieve his desperate desire for the coveted BB gun. Meanwhile, all of the iconic scenes that audiences fondly recall from the movie are found in its musical adaptation: Ralphie's friend Flick getting his tongue stuck to the flagpole; his brother Randy getting dressed in his suffocating snowsuit; the bullies Farkus and Dill; the leg-lamp Major Awards; Ralphie's bunny suit; the family dinner at a Chinese restaurant; and many, many more.

With its score running the gamut from gentle ballads to show-stopping ensemble numbers, and its songs including such titles as “Before the Old Man Comes Home,” “When You're a Wimp,” and the delightfully inevitable “You'll Shoot Your Eye Out!”, A Christmas Story: The Musical received Tony and Drama Desk Award nominations for Pasek's and Paul's compositions. Though the duo had already enjoyed critical success for their musical adaptations of works such as Dogfight and James & the Giant Peace, Pasek and Paul had their first Broadway smash with the 2015 musical Dear Evan Hansen, which won six 2016 Tonys including Best Musical and Best Score. Later that year, they served as songwriters for the score to the film La La Land, eventually earning an Oscar for “City of Stars” and a nomination for “Audition.” And Pasek and Paul followed that movie success by writing songs for last winter's sleeper smash The Greatest Showman, earning another Oscar nomination and a Golden Globe as lyricists for the radio hit “This Is Me.”