The Prenzie Players' “The Comedy of Errors,” April 5 through 13 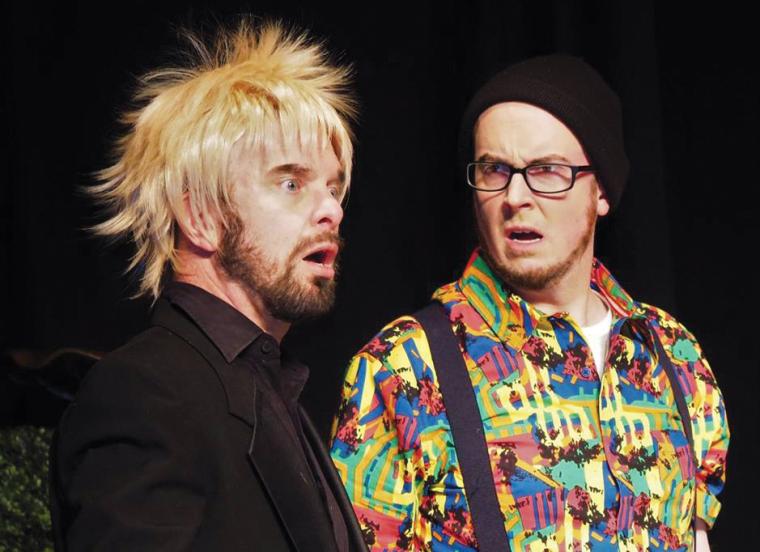 JC Luxton and Jake Walker in The Prenzie Players' "The Comedy of Errors" at the QC Theatre Workshop -- April 5 through 13.

Continuing the company's plan of producing all of William Shakespeare's plays by 2023, area verse-theatre troupe the Prenzie Players delivers one of the Bard's freshest and funniest titles in its April 5 through 13 QC Theatre Workshop staging of The Comedy of Errors – a work that esteemed literary critic Harold Bloom said “reveals Shakespeare's magnificence at the art of comedy” and demonstrated “mastery in action, incipient character, and stagecraft.”

Set in the Greek city of Ephesus, The Comedy of Errors tells the tale of two sets of identical twins who were accidentally separated at birth. Antipholus of Syracuse and his servant, Dromio of Syracuse, arrive in Ephesus, which turns out to be the home of their twin brothers: Antipholus of Ephesus and his servant Dromio of Ephesus. When the Syracusans encounter the friends and families of their twins, a series of wild mishaps based on mistaken identities lead to wrongful beatings, a near-seduction, the arrest of Antipholus of Ephesus, and false accusations of infidelity, theft, madness, and even demonic possession.

One of Shakespare's earliest plays, it is also his shortest and one of his most farcical works, with much of the humor coming from slapstick, puns, and wordplay. The Comedy of Errors is also one of only two Shakespearean plays (the other being The Tempest) to observe the Aristotelian principle of unity of time in that the events of a play should occur over 24 hours. Shakespeare's work has been adapted for opera, stage, screen, and musical theatre numerous times worldwide, and in the centuries following its premiere, the play's title has entered the popular English lexicon as an idiom for “an event or series of events made ridiculous by the number of errors that were made throughout.”

Directing his first production for the Prenzie Players is company veteran Adam Michael Lewis, who has appeared in such previous Shakespeare presentations as All's Well That Ends Well, Coriolanus, and The Winter's Tale. The twin Antipholuses are played by fellow Prenzie favorites JC Luxton (Antony & Cleopatra) and Jarrod DeRooi (Love's Labour's Lost), with the twin Dromios portrayed by Jake Walker (Macbeth) and Emma Regnier, the latter making her Prenzie Players debut. Rounding out the Comedy of Errors ensemble, meanwhile, are a quartet of longtime Prenzie talents – Cait Bodenbender, Kitty Israel, John R. Turner, and Denise Yoder – and company newcomer Noah Silvers, the latter triple-cast as Duke, Angelo, and a character known as “The Other Officer Who Looks Nothing Like the First.”

The Comedy of Errors runs at Davenport's QC Theatre Workshop April 5 through 13 with performances at 8 p.m. Thursdays through Saturdays and 3 p.m. on Sunday. Admission is “Pay What It's Worth” ticket pricing, and more information and reservations are available by visiting PrenziePlayers.com.