Crazy 'Bout Ya, Baby: “Forever Plaid,” at the Timber Lake Playhouse through August 26 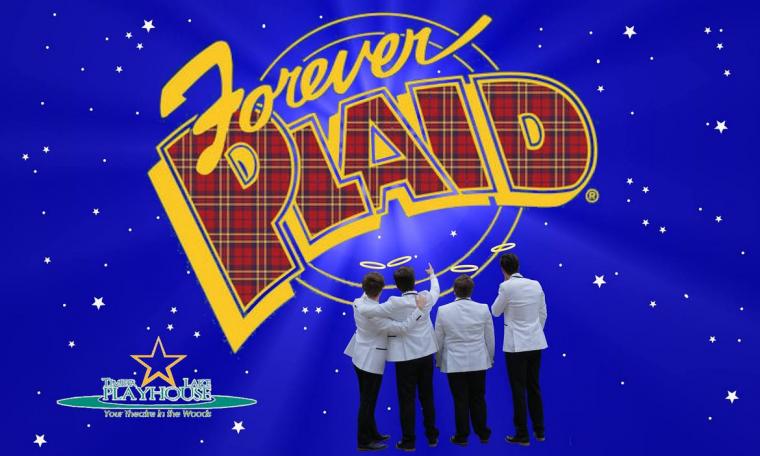 Soaring with melodies from another galaxy, the Timber Lake Playhouse's Forever Plaid is energetic, light-hearted, and funny in its nostalgic revue of 1950s close-harmony guy groups. Saturday's matinée performance of this outstanding production – directed and choreographed by Gregory Daniels, with the original musical arrangements by James Raitt – just kept getting more entertaining as the show went on.

The story follows four young men – Francis (Trevor Vanderzee), Sparky (Max Bahneman), Jinx (Ryan Wagner), and Smudge (Ben Senneff) – who have a passion for singing, consequently form a group called the Plaids, and are excited about their first big gig. However, while on the way to pick up their custom-made plaid tuxedos, they're sideswiped by a bus full of Catholic girls going to see the American debut of the Beatles on The Ed Sullivan Show. The schoolgirls survive; the Plaids are killed instantly. Somehow, though, through a cosmic miracle, the universe allows the quartet to return for the performance (of a lifetime) that they were never able to accomplish on Earth.

Forever Plaid's introduction has its four singers entering from the back of the audience and through the dimly lit center aisle holding candles as they make their way to the stage, and the sight is quite impactful. The four-part harmony was excellent, as well, with Daniels' clever dance sequences employing lots of level changes and varying formations as the quartet incorporated their steps with their employment of microphone stands. And Timber Lake's well-rounded and gifted cast sang a mind-boggling array of fantastic songs including “Chain Gang,” “Sixteen Tons,” “Day-O,” “Rags to Riches,” and “Heart and Soul,” to name just a few.

Senneff was brilliant as Smudge, belting out his songs like a pro while keeping me invested in his exaggerated facial expressions. The actor is clearly multi-talented and impressed me with his impersonation of Ed Sullivan, his ability to play the piano, his fantastic radio voice, and his overall aptitude in stealing scenes. That being said, though, all four of Forever Plaid's on-stage artists were fabulous in their capacity to sing, dance, and make the audience laugh.

Vanderzee’s tall, dark, and handsome looks made for a very dreamy Francis, and I completely enjoyed his impeccable vocals on his rendition of “Chain Gang.” Wagner showed off his singing chops and personality as Jinx in a playful arrangement of “Day-O” while the performer was decked out in a straw hat and colorful calypso arm pieces by costume designer Zandra Siple. (At one point, in a creative move, the foursome carries out two palm trees that have a strand of glowing lights attached, sets the trees up at the front of the audience, and proceeds to do the limbo. The actors also interact with the patrons while playing bongos and dancing about, which adds to the fun.)

Last, but certainly not least, Bahneman was delightful as the spunky Sparky, and spark he did, showing off his dance skills and agility with a little bit of tap included; I could tell that he was having a great time on-stage, and he was really fun to watch. Music director Michael Ursua did a similarly wonderful job as the conductor and keyboard player who suddenly takes a union break midstream – which was very comical – and then returns to the stage to take an honorable bow.

Common household items such as a glass bottle and spoons were converted into musical instruments throughout the production, making for unique sounds to accompany the multitude of songs. This production wasn’t just four guys singing harmony, but four guys changing costumes quickly backstage and appearing as a variety of hilarious characters, among them a Viking, a seal, a nun, and a ventriloquist. Senneff, at one point, even performs a sword-swallowing illusion.

Timber Lake’s Forever Plaid reminded me of the Frankie Valli & the Four Seasons musical sensation Jersey Boys, and I was enamored with the whole show from start to finish. There was never a dull moment, and the exceptionally talented performers were full of youthful enthusiasm and charm, making for a wonderful afternoon. The cast, meanwhile, earned a well-deserved standing ovation for a superb job on all counts. What a great way to end the company's summer season!