Child-Custody Suite: The Prenzie Players' “The Caucasian Chalk Circle,” at the QC Theatre Workshop through July 22 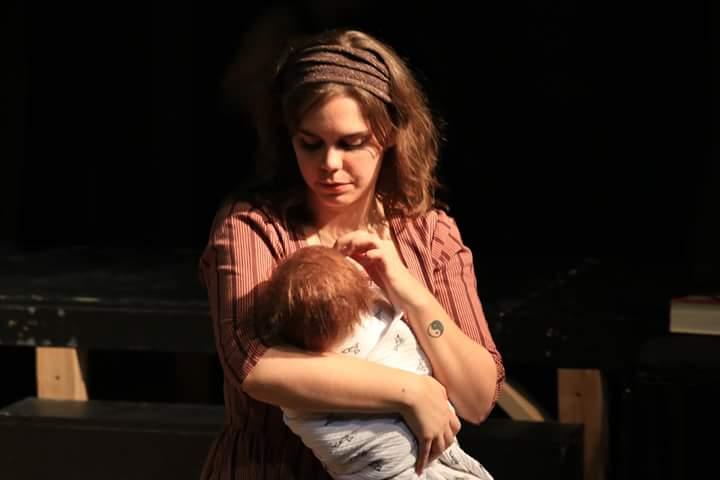 Sixty-six characters, a beheading, star-crossed lovers, a woman and child on the run, wedding and funeral parties for the same guy (on the same day), a crazy judge, songs, and another beheading all add up to an incredible evening of theatre courtesy of Bertolt Brecht and the Prenzie Players. Brecht is known for his “epic theatre” works and, true to form, the Prenzies' staging of The Caucasian Chalk Circle incorporates a play-within-a-play – or rather, a parable-within-a-play – alongside social commentary, occasionally absurd humor, sentimentality, satire, and music. (Whew!) And meeting this challenge are director Kate Farence, her creative crew, and her stellar cast of 15 (10 of whom play multiple roles),  who made for exciting theatre on July 14's opening night.

Having previously been to the QC Theatre Workshop, I was surprised to find the traditional two levels of risers for audience seating reconstructed to make theatre-in-the-round, with four “gaps” serving as entrance points and additional stage space for actors. The black risers surrounded a black floor with a black card table and four black cubes for performers to sit on – each featuring white veining that gave them a marbled effect – with additional props stationed to the side of one of the gaps. (Props-wise, you should especially watch for the scene involving the ingeniously crafted bridge.) Farence's and Jarrod DeRooi's set design put the actors in very-close proximity to the audience, and the performers would, at times, interact with us; on Friday, one actor offered me a bite of cheese, and another nudged me and asked if I agreed with something said on-stage. This interactive effect engages the audience in the action and, for me, added to the tension in a play that has a lot going on. 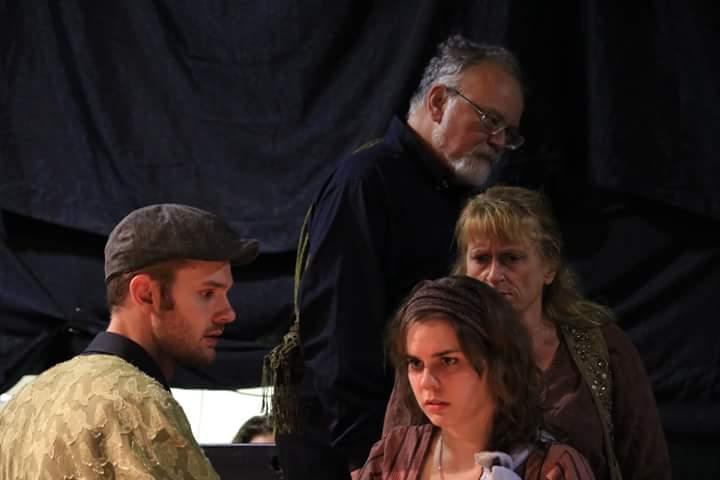 Farence's Caucasian Chalk Circle opens with a group of people trying to decide the best use for a tract of land, which leads to the telling of a parable about a peasant girl, Grusha, who takes in a baby boy abandoned by his materialistic mother. The child is the son of a deposed governor and is in danger of being killed by soldiers, and Grusha needs to reach her brother’s farm in the mountains, where she thinks she and the baby will be safe. Even though she loves another, Grusha is forced into marriage – for the child's well-being – with a dying man, and after risking her life many times over several years, the girl is eventually captured and put on trial. The biological mother, it turns out, wants her boy back, and the case of who gets the child falls in the hands of a lunatic judge who mocks the judicial system via ludicrous decisions and the taking of bribes.

As mentioned, The Caucasian Chalk Circle features 66 characters, 61 of whom were played by 10 amazing actors who, in every instance, were able to make whatever characters they were playing so distinctive that I was never confused about who they were or how they fit into the story. They all deserve mention as my favorites of their many characters: Virginia Atwell as an unwelcoming sister-in-law; Andrew Bruning as a touching, funny, kind brother; Andy Curtiss as a frighteningly mean back-from-the-dead husband; Dani Helmich as the judge's perfect foil; Tim Miller as a drunk monk; Matt Moody as a bloodthirsty corporal; Angela Rathman as a conniving mother-in-law; and Elizabeth Sager, Chris Sanders-Ring, and John Turner, respectively, as Brecht's Doctor, Peasant Woman, and Prince Kazbeki. 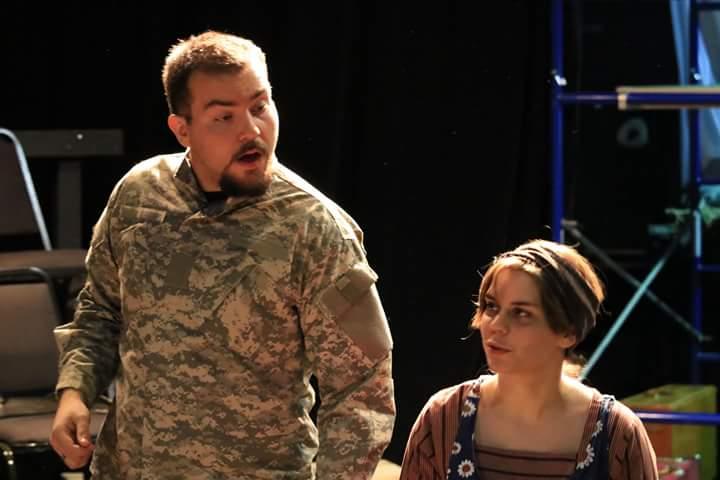 The production's five lead actors, however, each played one character. Mattie Gelaude, as Grusha, showed such a range of emotions, and with such a pall of desperation, that she made my heart ache. Alaina Pascarella, impressive as The Singer, served as our narrator and moved the story along nicely, Pascarella's beautiful voice best showcased in her song about a bridge. Wholly believable as Simon, the shy young soldier in love with Grusha, Payton Brasher spoke to the girl in third-person, and she responded in kind; their charming, quirky conversations accentuated the characters' awkwardness and sweetness. Kitty Israel was scary as the self-absorbed mother Natella, reminding me of Cruella de Vil. And Aaron Sullivan, as the corrupt Judge Azdak, commanded the space no matter where he was. His manner and voice and natural delivery made his fully developed character at times disgusting, shocking, hilarious, and yet somehow … likable.

Brecht's story involves themes of class, privilege, social justice, love, power, and goodness, and the entire Caucasian Chalk Circle cast and crew worked together seamlessly to make a complicated story accessible while maintaining the classical intent of the original piece. Their creative nuances and energy made for a satisfying, brilliant theatre experience.

The Caucasian Chalk Circle runs at the QC Theatre Workshop (1730 Wilkes Avenue, Davenport) through July 22, and more information and tickets are available by calling (563)484-4210 or visiting PrenziePlayers.com.