The Mississippi Bend Players' “Dames at Sea,” July 26 through August 4 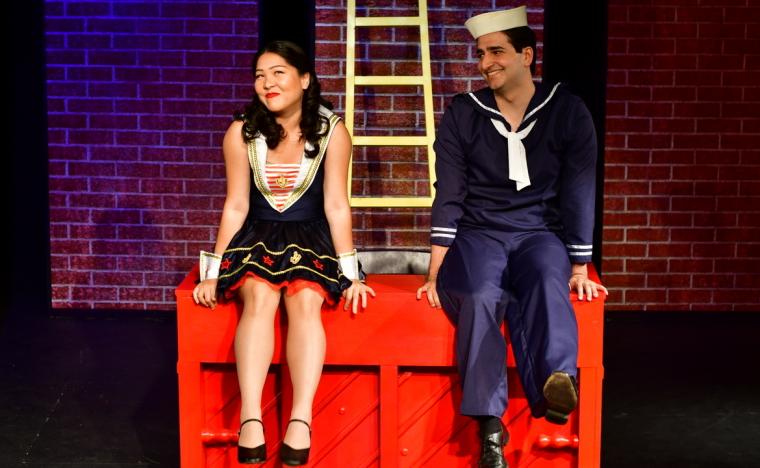 Mind Punyanuch-Pornsakulpaisal and Rami Halabi in the Mississippi Bend Players' "Dames at Sea" -- July 26 through August 4.

Named “Best Musical of the Year” by Time magazine, Newsweek, and the Outer Critics Circle Awards, the tuneful, tap-dancing entertainment Dames at Sea serves as the season-ending production for the Mississippi Bend Players at Augustana College's Brunner Theatre Center, the show's July 26 through August 4 run demonstrating why the New York Times called it “a gem of a musical” and United Press International deemed it “an instant hit.”

A long-running off-Broadway smash that brought stardom to a debuting Bernadette Peters in 1966, Dames at Sea both salutes and spoofs Hollywood musical comedies of the 1930s. In the show, sweet little Ruby from faraway Hometown, U.S.A., has come to make it big in big-time New York. Ruby steps off a bus and into her first Broadway production, but hours before the opening-night curtain is set to rise, the cast learns that their theatre is going to be demolished. Can Ruby save the day, and her fledgling career, with the aid of a handsome sailor/songwriter and fellow Hometown native? The answer comes in this sweet, hilarious, and toe-tapping treat that inspired USA Today to rave, “Check your cares and pretensions at the door … and prepare to be thoroughly charmed.”

Directing Dames at Sea is the Augustana theatre department's Shelley Cooper, who co-starred in A Green River and directed Big River for the Mississippi Bend Players, and whose other local musicals include the college's productions of How to Succeed in Business without Really Trying and The Drowsy Chaperone. Portraying Ruby is Pleasant Valley High School senior Anna Myatt, a veteran of MBP's Zombie Prom and Genesius Guild's recent The Tempest, with the role of Dames at Sea diva Mona played by Anna's real-life mother Christina Myatt, the director/choreographer of Quad City Music Guild's 42nd Street whose area stage roles have included Norma Desmond in Music Guild's Sunset Boulevard and Fantine in Countryside Community Theatre's Les Misérables. And rounding out the show's seven-person cast are Rami Halabi (Augustana's The Drowsy Chaperone), Noah Hill (Augustana's How to Succeed …), Doug Kutzli (the Circa '21 Dinner Playhouse's Grumpy Old Men: The Musical), Lucas Thompson (Circa '21's Holiday Inn), and Mind Punyanuch-Pornsakulpaisal, a native of Bangkok, Thailand who is pursuing her MFA at Boston Conservatory at Berklee and whose credits include roles in Phantom of the Opera and James & the Giant Peach.

Dames at Sea will be staged at Augustana's Brunner Theatre Center July 26 through August 4, with performances at 7:30 p.m. on Fridays and Saturdays and 2 p.m. on Sundays. Tickets are $15-20, with discounted $10 admission for all military and veterans, and more information and reservations are available by calling (309)794-7306 or visiting MississippiBendPlayers.com.