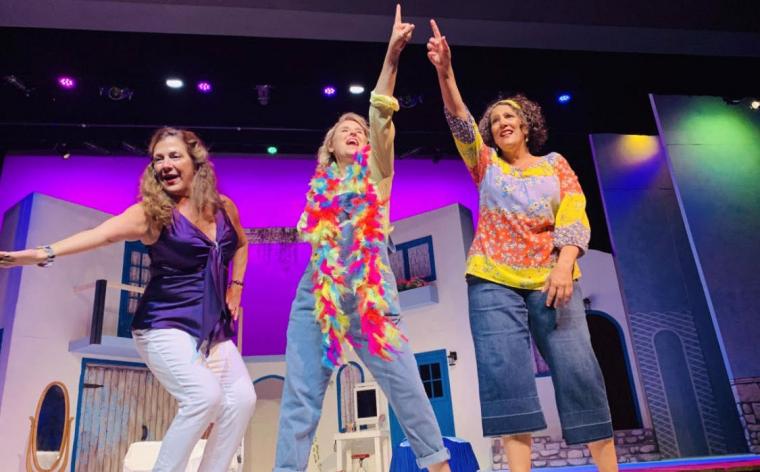 Although it was sweltering outside on Friday night, it was cool and comfortable inside the North Scott High School Fine Arts Auditorium. Nonetheless, a heat wave of talented artists stormed the stage as Countryside Community Theatre and Lancer Productions put on a sizzling opening-night performance of the jukebox musical Mamma Mia! Their presentation was heartwarming, pure, and inspiring, and boasted, of course, the fantastic, chart-topping music of ABBA in such popular songs such as “S.O.S.,” “Knowing Me, Knowing You,” and “The Winner Takes It All.”

Patrons were transported to a beautiful Greek island complete with beach parties and an ocean breeze, and once the cast members shook off their apparent debut-jitters, Friday's show – the production directed by Renae Mohr – progressed very nicely; everyone seemed to fall into their roles and get more comfortable as the night went on. There was a real feeling of community throughout the evening, as an enormous cast composed of both young and old poured their hearts out in song and dance. And the audience simply soaked it up.

Mamma Mia! revolves around the past love life and musical career of Donna Sheridan (Ticia Balsar), a single mother running a literal Greek restaurant and happy with her current life. But her 20-year-old daughter Sophia Sheridan (Emily Majetic), who's preparing to marry her fiancé Sky (Joseph Lasher), discovers her mother’s old diary where she learns of three men: Sam Carmichael (Clint Balsar), Bill Austin (Anthony Dexter), and Harry Bright (Lonnie Behnke), all of whom could potentially be her father. Unbeknownst to her mother, Sophie invites the trio of men to her wedding and the story unfolds. 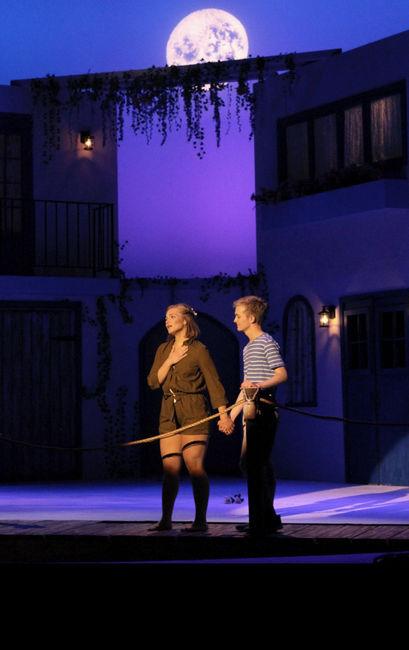 I was really impressed with the show's large ensemble harmonies, and just how well the performers sang (under the instruction of vocal director Kiki Keeney) while also executing terrific choreography by Lisa Tanner. And it was truly a pleasure to witness all of the young people enthusiastically come together with such unity and discipline to deliver an impactful, memorable performance. It was obvious that a lot of hard work went into this production, and the cast definitely poured its collective heart out on the stage.

By the end of the show, the audience was erupting in spontaneous, rhythmic clapping in perfect tempo with the music. I’ve never quite experienced anything like that in theatre, and it brought a tear to my eye; you could almost tangibly feel the support and love in the room. Among this Mamma Mia! cast, Majetic was outstanding as the golden-haired Sophie, who on a quest to find her father ends up discovering a whole lot more. And portraying her feisty mother Donna, Balsar was also very good, even if it seemed to take her most of the show to really commit to her songs. By the time Act II rolled around, however, and she sang “The Winner Takes It All,” Balsar really loosened up and sang with raw emotion.

Bonita Howes nailed her part as Tanya Cresham-Leigh, one of Donna’s old friends and a former band member of the infamous Donna & the Dynamos. Howes really tapped into her sassy and seductive ways, at one point even flirting and blowing kisses to a man in the audience. Penny O'Connor, as third member of the band Rosie Mulligan, really had a breakthrough moment with Dexter in their playful “Take a Chance on Me” duet, O'Connor was vivacious and spunky in her deliveries, and Dexter showed his agility and comedic timing as the heat between their characters turned up. 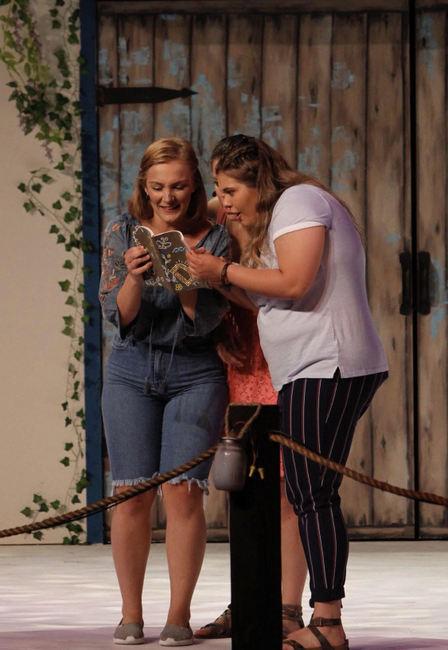 As I said early on, it was obvious that a lot of hard work went into this production, and the scenic design by Tom Goodall was gorgeous, with its attention to delicate detail apparent in everything from the attractive green vines hanging over the window balconies to the dainty white curtains to the precisely painted windows and door frames. Everything blended so well together, and with lovely color choices of teal, purple, and pink that just popped.

The orchestra pit doubled as a pond and a convenient place for the actors and actresses to climb out of, with the strategically placed ladder inside creating a lot of varied visual impact. There was never a dull moment in this production, and the cast utilized the entire auditorium, at one point entering from the back, carrying candles, while singing like angels in an ever-so-controlled manner.

Needless to say, I was pleasantly surprised with how professionally entertaining Countryside Community Theatre’s musical production of Mamma Mia! was, and I left singing old ABBA songs under my breath – songs that, in this musical, simply never get old.