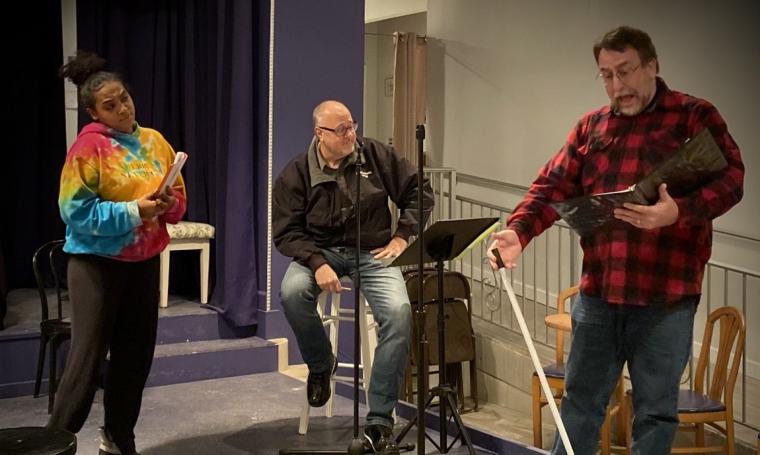 Kira Rangel, Doug Kutzli, and Gary Talsky rehearse "Deck the Halls" at the Mockingbird on Main -- December 9 through 18.

A debuting musical of holiday favorites and an original comedic script close the curtain on the Mockingbird on Main's inaugural 2021 season, with the Davenport venue's December 9 through 18 run of Deck Halls treating audiences to six evenings of yuletide revelry written and directed by the theatre's co-founder Tristan Layne Tapscott.

Deck the Halls finds a seasonal snowstorm hitting a small town, resulting in the star-studded cast of a radio show being unable to make it into the studio. A quartet of staffers who are now trapped inside the studio – the the show's writer, the station's janitor, the assistant station manager, and a young, frazzled producer – must consequently take over and see that show does indeed go on. A debuting, fast-paced, family-friendly holiday musical, Deck the Halls features such popular standards as "Jingle Bells," "Silent Night," "We Wish You a Merry Christmas," a newly arranged version of "O Little Town of Bethlehem," and other favorites, and as Mockingbird co-founder Savannah Bay Strandin stated, "The show is all fun and fluff and is the perfect getaway from the outside world." The musical's writer/director Tapscott added, “We aren’t trying to reinvent any wheels or re-imagine what theatre can do; we just wanted to bring something fun and happy to the landscape!”

Along with composer Danny White, Tapscott previously crafted a new musical stage adaptation of Charles Dickens' A Christmas Carol, which enjoyed seasonal runs at the District Theatre and with Countryside Community Theatre. Tapscott can also be currently seen in the Circa '21 Dinner Playhouse's mainstage musical Winter Wonderland and as the Cat in the Hat in the family musical Seussical, and his additional credits include roles in local productions of Holly Jolly Christmas, Mr. Scrooge! A Musical Christmas Carol, and Irving Berlin's Holiday Inn. Deck the Halls features song arrangements by area favorite Doug Kutzli, a castmate/musician in Circa '21's recent virtual movie musical Big Rock Candy Mountain and a co-star in the Circa '21 Speakeasy's The Rocky Horror Show. Kutkli also plays the radio-station writer Doc in Deck the Halls, and he's joined on-stage by three additional area-theatre veterans: T.J. Green (the Mockingbird on Main's “Jacques”alope) as the producer Roy, Kira Rangel (Circa '21's Beehive: The '60s Musical) as assistant station manager Loretta, and Gary Talsky (the Richmond Hill Barn Theatre's Escanaba in da Moonlight) as the janitor Elias.

Deck the Halls will be presented in downtown Davenport from December 9 through 18, with performances Thursdays through Saturdays at 8 p.m. Admission is $10, and more information and tickets are available by visiting TheMockingbirdOnMain.com.