Deep in the Hearth of Texas: “A Doublewide, Texas Christmas,” at the Richmond Hill Barn Theatre through November 17 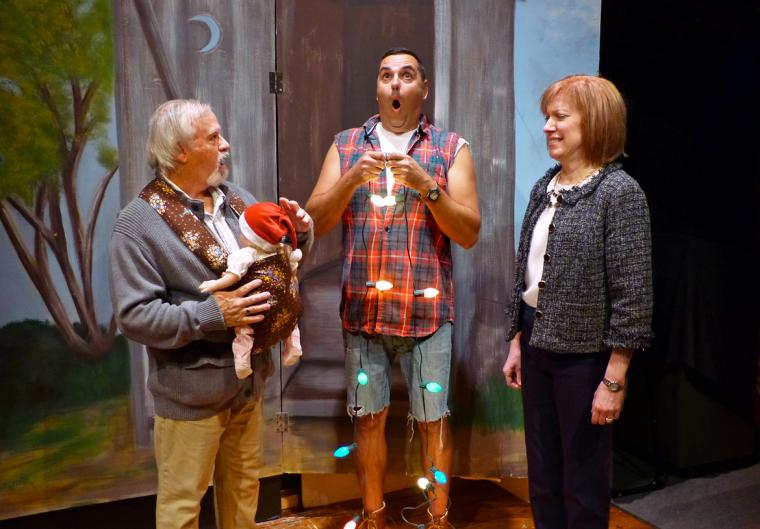 It's starting to look a lot like Christmas in the tiny town of Doublewide, Texas, and Saturday's performance of A Doublewide, Texas Christmas by Jessie Jones, Nicholas Hope, and Jamie Wooten was a hoot at the Richmond Hill Players' cozy Barn Theatre. It's a silly comedy full of colorful characters and even sillier situations, and judging by the full house and continual laughter, I would venture to say most everyone enjoyed themselves.

Directed by John VanDeWoestyne, the story takes place in a trailer-park community two weeks before Christmas. The residents are all stressed out about the holidays and the fact that their little town may soon cease to exist because their official incorporation papers are in jeopardy. Craziness ensues as the eccentric Texans take on the powers that be and look for legitimate ways to be taken seriously and win the admiration of future residents. Consequently, they set out on a quest to win a local contest called “Battle of the Mangers,” determined to win this Nativity-set smackdown.

Among the things I like most about traveling to this Geneseo venue are the good-old-hometown vibes, and the theatre patrons are wonderful. And although Doublewide's slapstick genre is not my favorite, I did, on Saturday, let loose a chuckle or two. I also appreciated the colorful costumes by Suzanne DeReu and the show's cast and crew. 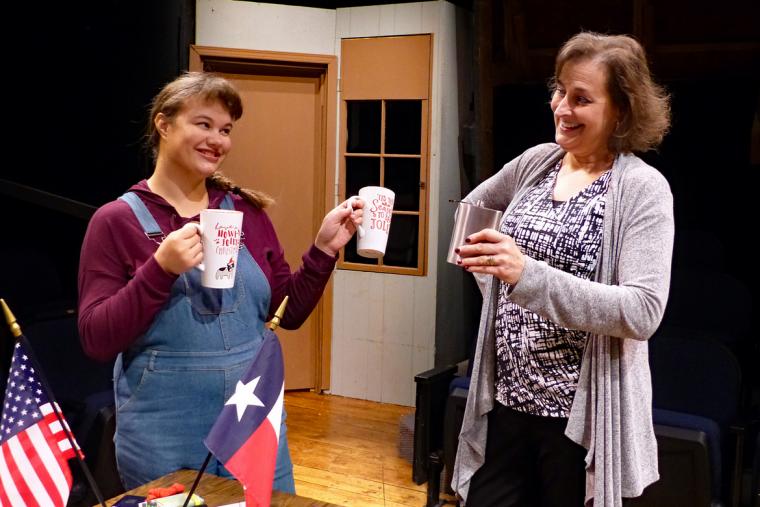 Jackie Skiles sported a funky, pink cowboy hat with white tinsel trim as Georgia Dean Rudd, an older woman looking for love in all the wrong places. Also really making a fashion statement was the local "star" Caprice Crumpler played by Diane Greenwood, who was a legend in her own mind, wearing a bright, sparkling gold sequin blouse, fuchsia leopard print leggings, and gold shoes to top it off. Greenwood was obnoxiously funny and excellent in her projection and enunciation, with a unique way of using her face and eyes to really make her character believable. (Caprice is at her best when teasing and taunting Mike Skiles' Haywood Sloggett, the cranky old neighbor whom she loves to tempt.)

Storm Baca was precious as the young and impressionable Lark Barken, who was a new mother and enthusiastic participant in the goings-on. Eugenia Giebel, as local health-care professional Big Ethel Satterwhite, was quite charming, and although Giebel occasionally stumbled over her lines, she knows how to work an audience and pull out the laughs as she addresses us from the Stairway to Heaven Retirement Center. And Lorrie Lord took on her character Patsy Price with full vigor, reminding me somewhat of a feminine version of the late Ross Perot in the way she handled her Texas accent, stammering and almost spitting out her lines with an impressively spunky persona. 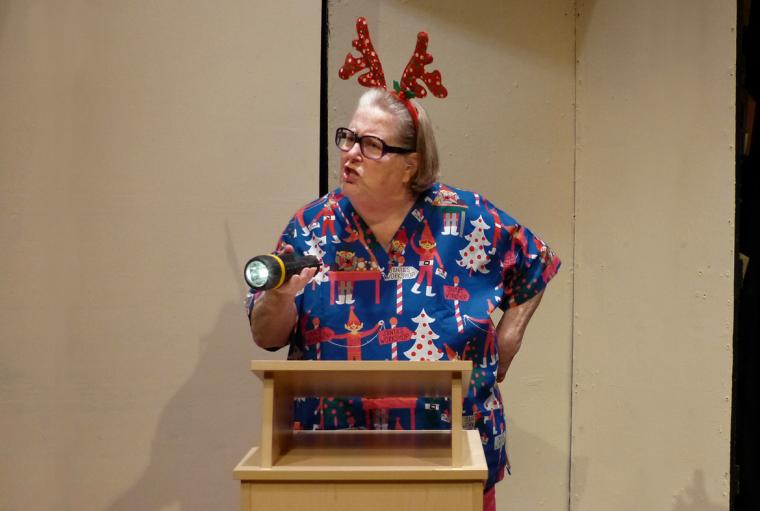 Suzanne Rakestraw did a nice job portraying the mallet-wielding mayor of Doublewide, Joveeta Crumpler, who is plagued with a bad back and at times a bad attitude. Rakestraw tapped into her crazy side as she frantically tried to control the desperate residents who were running amok. Norwayne “Baby” Crumpler (Nathan Johnson), the village idiot as well as police and fire chief, not only spars with the local residents, but also with a pack of vicious raccoons who attack him regularly. (Off in the distance we hear the raccoons screaming and squealing, which sounded authentic thanks to sound designer Larry Lord.) And rounding out the cast is Tom Akers, who pops in with a cameo as the long-lost Nash Sloggett.

The set construction by Mike and Jim Skiles was very basic, consisting of simple table and chairs along with a colorful sofa that sunk down deep whenever anyone sat in it. The storyline, meanwhile, was a bit sparse, too, and rather juvenile, as characters carried on about a potato that looks like “Lady Bird” while also promoting their town as a great place to live during a botched broadcast. Similarly, lunatic antics overflow with fireworks gone wrong and misdirected values, but like I said, the majority of Richmond Hill's audience seemed to be enjoying the shenanigans taking place within this newest and tiniest town of Texas. The show’s runtime is approximately two hours and did seem to move along quickly, so if you’re in the mood for a lighthearted, mindless comedy, then the Richmond Hill Players’ A Doublewide, Texas Christmas should not disappoint.

A Doublewide, Texas Christmas runs at the Richmond Hill Barn Theatre (600 Robinson Drive, Geneseo) through November 17, and more information and tickets are available by calling (309)944-2244 or visiting RHPlayers.com.