“Defending the Caveman,” September 29 through October 9 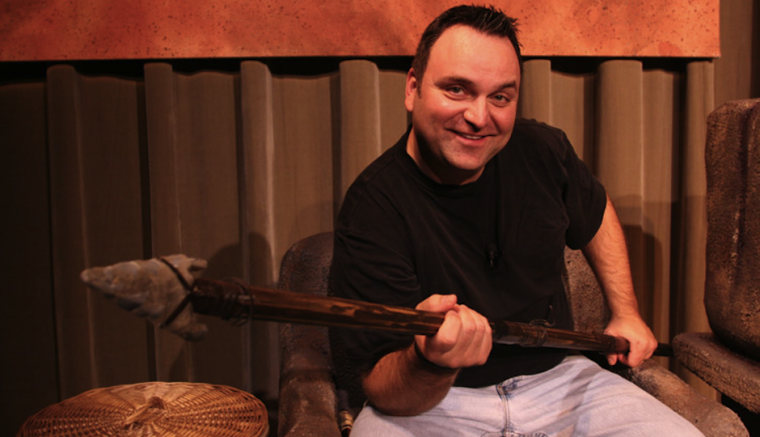 Vince Valentine in “Defending the Caveman" at the Timber Lake Playhouse -- September 29 through October 9.

Hailed by the Chicago Sun-Times as an "outrageously funny and surprisingly sweet exploration of the gender gap,” the one-man riot Defending the Caveman enjoys a September 92 through October 9 run at Mt. Carroll's Timber Lake Playhouse, with author Rob Becker's 1991 work still standing as the longest running solo play in the history of Broadway.

Written by Becker over a three-year period during which he made an informal study of psychology, sociology, and prehistory, Defending the Caveman is a blend of stand-up comedy, lecture, and therapy session that attempts to resolve the war between the sexes. The play manages to stand up for the male viewpoint while still being sympathetic to the female side of issues, as well, and Becker has described his work as a vehicle for showing that "men have emotions, but they express them differently." Over the course of its 31-year history, the solo show has won the hearts of millions across the globe, having been translated into 16 languages and performed in more than 40 countries to date. Lauded by the New York Times as a " comic phenomenon," Defending the Caveman offers hysterical observations on contemporary feminism, masculine sensitivity, and the erogenous zone, exploring common themes of relationships in ways that go straight to the funny bone.

Starring in Timber Lake's one-man challenge is Philadelphia native Vince Valentine, who made his stage debut when he was 11 years old at his cousin Anthony’s First Holy Communion with his now legendary comedy bit “Uncle Dominic at the Racetrack." After taking Paul J. Solari’s Stand-Up Comedy Workshop in his 30s, Valentine began performing at comedy clubs along the East Coast, and has since starred as Christopher in The Soapranos, touring throughout the United States in an interactive parody of HBO's The Sopranos. Valentine was selected from 1,500 actors as one of five finalists for NBC10’s “Best Summer Gig Ever Traffic Contest," and also made a guest appearance on NBC 10! Live as a panel guest. In addition to appearing in the independent film Shut Up & Eat that he co-wrote and starred in, Valentine was also a finalist in Philadelphia’s 93.3 WMMR’s “Philly’s Last Comic Standing” and appeared in the Philadelphia Fringe Festival as a member of the Sketch Comedy Troupe Skitzoids. He has been performing productions of Defending the Caveman since 2004.

Defending the Caveman will be performed at the Mt. Carroll theatre from September 29 through October 9, with scheduled performances at 2 and 7:30 p.m. Tuesdays through Sundays. Admission is $25-35, and more information and tickets are available by calling (815)244-2035 and visiting TimberLakePlayhouse.org.