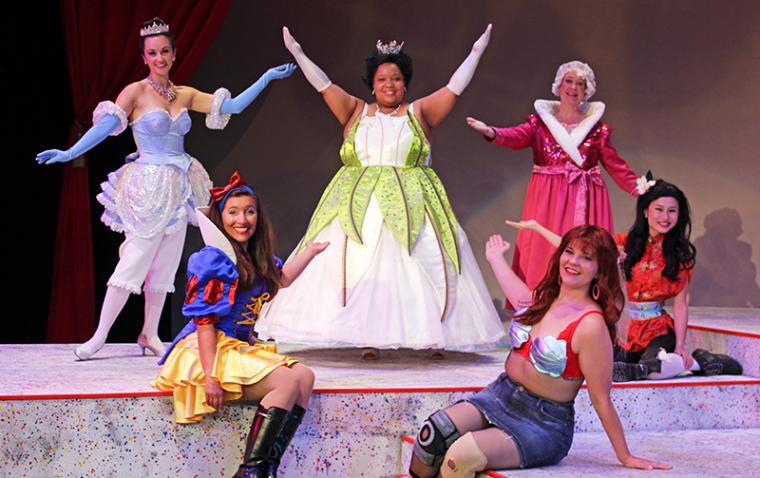 Described by the New York Times as “a girls'-night-out retro rebellion” and praised by DC Metro Theater Arts for its “knowingly cheeky attitude” and “witty, often rapid-fire lyrics,” the Disney-princess musical-comedy spoof Disenchanted! enjoys a September 15 through November 6 run at Rock Island's Circa '21 Dinner Playhouse, with this new stage work, according to Chicago Critic, full of “fun music and even funnier characters [that] will have you laughing all the way to the palace.”

Poisoned apples, glass slippers ... . Who needs ’em?! Not Snow White and her posse of disenchanted princesses in this hilarious, naughty hit musical that’s anything but Grimm. In Disenchanted!, Cinderella is kind of a nitwit, Snow White can be a little mean, and Sleeping Beauty ... . Well, she's apparently a narcoleptic. In this musical comedy for grown-ups, this trio lead an all-princess revue aimed at upending their popular portrayals. When the princesses rail against princes who expect them to do all the housework, you can forget the princesses you think you know – as well as such familiar characters as Pocahontas, Ariel, Rapunzel, Mulan, and the Princess Who Kissed a Frog. These royal and ruthless renegades are tossing off their tiaras to set the record straight in a show that London Theatre Reviews called “sass-fueled enjoyment” that's “not to be forgotten.”

In addition to its preview performances on September 15 and 16, Disenchanted! will be performed September 17 through November 6, with performances on Fridays, Saturdays, and Wednesdays at 7:45 p.m.; Sundays at 5:45 p.m.; and Wednesday afternoons at 1:30 p.m. All shows will be preceded by meals and pre-show entertainment by the theatre's performing wait staff of Circa '21 Bootleggers, and more information and tickets are available by calling (309)786-7733 extension 2 and visiting Circa21.com.