Do Right Women: “Beehive: The '60s Musical,” at the Timber Lake Playhouse through September 16 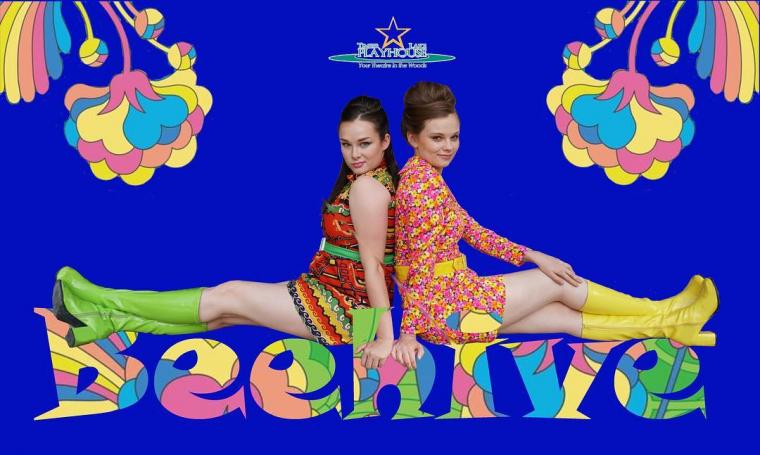 "Beehive: The '60s Musical" at the Timber Lake Playhouse

With the sentiment of the late Aretha Franklin and her famous song lyric, I extend R-E-S-P-E-C-T to the cast and crew of the Timber Lake Playhouse for delivering a most entertaining production of Larry Gallagher’s Beehive: The '60s Musical. The show's six posed, and composed, young actresses grabbed your attention from the start of Saturday's matinée performance, with each diva poised upon their platforms ready to explode with talent from the opening scene.

Directed by Dana Iannuzzi with music direction by Lena Gabrielle, Beehive celebrates the songs of yesteryear, of revolution and change, that truly transformed the cultural landscape in America. Decked out in shimmering gold dresses, mini-skirts, and go-go boots by costume designer Terri Miller, the ladies of the beehive sing and dance their vivacious little hearts out. And I really felt the energy and girl power when all of the cast members came together.

As queen bee Wanda, Ashley Lyles just exudes personality and confidence as she narrates, really setting the tone for the show with an excellent vocal quality and delivery style found both in her narration and singing ability. Portraying Patti, Lily Dickinson knocked it out of the park with her performance of “You Don’t Own Me” while toking on a fake cigarette; she pranced around that stage like nobody’s business and really owned her every movement and lyric. Dickinson also delivered an outstanding and soulful rendition of “Son of a Preacher Man” that really wowed me.

Not to be outdone, Bessie D. Smith's Gina had the audience rolling down the river with her powerful presentation of Tina Turner’s “Proud Mary,” only to come back at us again with a commanding arrangement of the legendary Aretha Franklin’s “Chain of Fools.” We also got to witness Kat Blackwood's Laura transform herself into Janis Joplin with great songs such as “Me and Bobby McGee.”

Portraying Allison, Bradley Farmer shined in her song “My Boyfriend’s Back” as written for the American girl group The Angels in 1963. Farmer has a very bubbly stage presence and incorporated a male audience member to sing to during this scene. And while, in her role as Jasmine, Samantha Mbolekwa kind of got lost in the sea of talent surrounding her, she held her own amongst her fellow cast members, as Beehive was definitely a group effort.

The set was bare other than the four-piece band that was situated at the top and back of the stage – an ensemble, by the way, that did a fabulous job. Keith Truax's lighting design really made the scenes come alive by spotlighting each singer as well as setting the room's ambiance, and the choreography by Felicia Finley was topnotch, requiring a lot of energy and fast foot work that the young women all nailed. Meanwhile, the beehive wig designs by Kurt Alger were really fun and definitely made you feel like you were transported back in time.

One particularly touching scene found the cast assembled together for the song “Abraham, Martin, and John,” sung in remembrance of John F. Kennedy and Martin Luther King. The verse about Abraham was cut out, but the whole sequence – with a radio voice-over announcing Kennedy’s assassination – got me all choked up, as the actresses really made you feel the magnitude of the situation and the sadness felt by the whole world.

There were quite a few times during the production in which the cast members entered from the back of the theatre and various corners of it as well, making for a more interactive experience as they danced and sang in the aisles. There were also so many costume changes that it was mind-boggling; these ladies really worked up a sweat. One thing I found slightly distracting, though, was how the performers' microphones were taped to the center of their foreheads. I'm sure there was a good reason for this, as they were all wearing wigs. But from where I sat, the black microphones were really noticeable and, in all honesty, weird-looking.

That being said, I felt very satisfied with Timber Lake's Beehive, and left with great appreciation for these young women who left it all on the stage. They managed to capture the era and its music and make me yearn for more – and what a wonderful tribute to Aretha Franklin, as well as all those other extremely talented women who were catapulted into stardom in the 1960s.

Beehive: The '60s Musical runs at the Timber Lake Playhouse (8215 Black Oak Road, Mt. Caroll) through September 16, and more information and tickets are available by calling (815)244-2035 or visiting TimberLakePlayhouse.org.