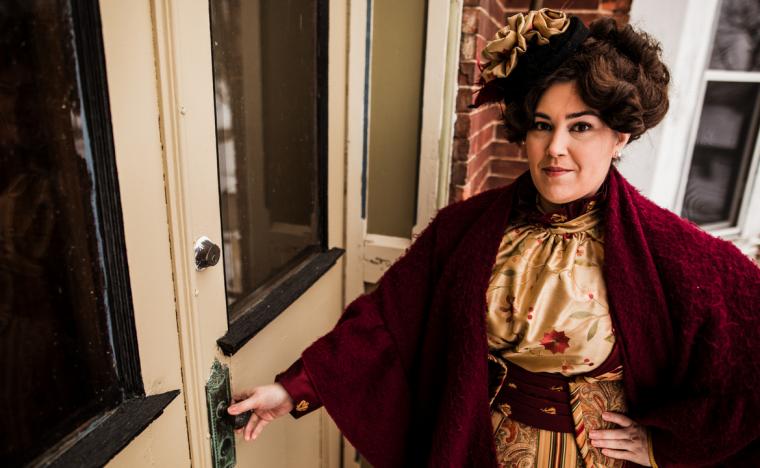 Kitty Israel in "A Doll's House, Part 2" at the QC Theatre Workshop -- February 15 through March 3. (photo by Jessica Sheridan)

Described by the New York Times as “smart, funny, and utterly engrossing” and by Time Out NY as “modern in its language, mordant in its humor, and suspenseful in its plotting,” author Lucas Hnath's A Doll's House, Part 2 makes its area debut at Davenport's QC Theatre Workshop February 15 through March 3, treating audiences to the Broadway hit of 2017 that Deadline magazine called “the sharpest play of the year.”

A Tony nominee for Best Play and winner for lead actress Laurie Metcalf, A Doll's House, Part 2 is a comedic continuation to Henrik Ibsen's groundbreaking classic that ended with its heroine Nora walking out on her children and husband Torvald in search of independence. Now, 15 years have passed, and Nora has become a successful feminist writer. Torvald, meanwhile, continues to work at the bank, having raised their children with the aid of housekeeper Anne-Marie. Nora, however, has learned that she and Torvald were never actually divorced, and returns to her old home to request that the man make their parting official. But after all that’s happened, will Torvald give her what she wants? And is Nora prepared to face everything she left behind, including her now-grown daughter Emmy? The answers come fast and funny in Hnath's 90-minute A Doll's House, Part 2, a work that the Hollywood Reporter said “delivers explosive laughs while also posing thoughtful questions about marriage, gender inequality, and human rights,” adding that “it's as much as ingenious elaboration and deconstruction of A Doll's House as a sequel, and it stands perfectly well on its own.”

Directing his first production for the QC Theatre Workshop is Dave Bonde, a comedian with the area's Comedy Thingy brigade whose other directorial credits include St. Ambrose University's You Can't Take It With You and the Curtainbox Theatre Company's Glengarry Glen Ross. Kitty Israel, who portrays Nora, is also making her Workshop debut, having appeared in such area works as the Prenzie Players' Henry VIII: All Is True and Genesius Guild's The Merchant of Venice. The cast for A Doll's House, Part 2 is rounded out by Workshop veterans Laila Haley (Broken, The Big Meal) and Reader employee Mike Schulz (Dead Man's Cell Phone, Peter & the Starcatcher), as well as first-time Workshop performer Jackie Skiles, whose many credits at Geneseo's Richmond Hill Barn Theatre include California Suite, Busybody, and Vanya & Sonia & Masha & Spike.

A Doll's House, Part 2 runs February 15 through March 3 with performances at 7:30 p.m. on Thursday through Saturdays and 3 p.m. on Sundays. Admission is “Pay What It's Worth” ticket pricing, and more information and reservations are available by calling (563)823-8893 or visiting QCTheatreWorkshop.org.