Duke-ing It Out: "The Revenger's Tragedy," at the QC Theatre Workshop through June 25 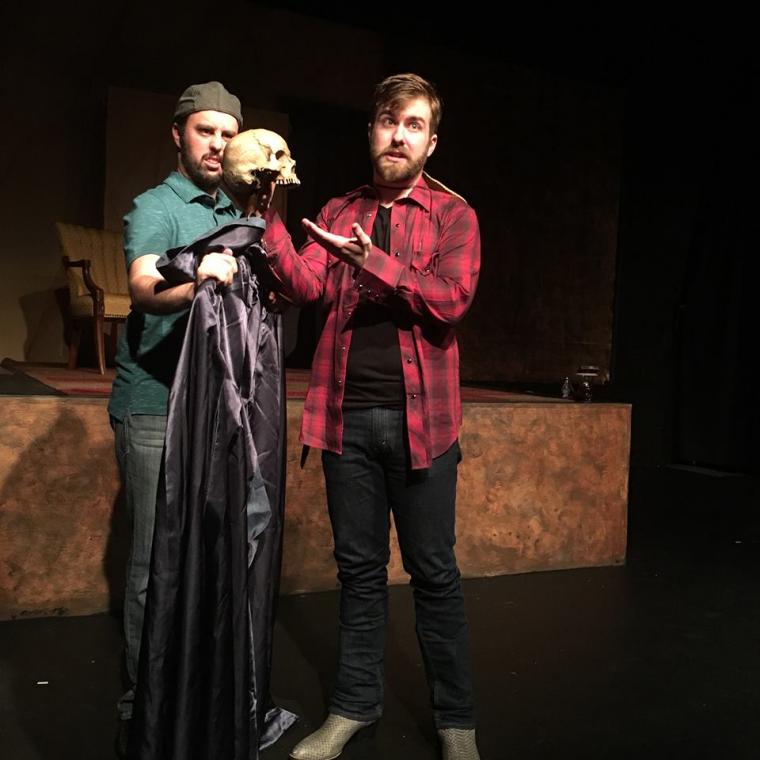 Andrew Slater and Andy Curtiss in The Revenger's Tragedy

The Prenzie Players' production of The Revenger’s Tragedy takes a dark look at ambition, lust, a lover’s vengeance, and the drive to achieve it, and is lacking any real superheroes. Director Matt Moody modernizes this Thomas Middleton play written in the early 1600s mostly with the employment of modern clothing, and although the work is centuries old, a lot of its subject matter, unfortunately, is still relevant today.

If you see this show, plan on arriving early, because at its Thursday-night preview, the audience witnessed two short vignettes about 10 minutes before the lights went down involving a young man (Christian Hann) chasing wantonly after a young woman (Alison Farrier). In the opening courtroom scene, we consequently learn that the young man is one of the Duke’s sons and has raped and killed the girl. After withstanding a short trial, he is put in jail until a sentence can be decided. And even though The Revenger's Tragedy is performed in verse, a lot of the language in that scene was very timely, particularly when the slain girl's lover, played by Elisabeth Athas, states, “Judgment in this age is ne'er kin to favour.” Those are interesting words coming from the 1600s, saying if you are born into a privileged family, you can basically get away with murder – a hot-topic idea in our current world. What follows is the unraveling of the Duke (the boisterous Scot Gehret) amidst a family that is riddled with lies, betrayals, and atrocities against others, with the mastermind of this unraveling Vindici, a man on a nine-year quest for revenge for the Duke's killing of his wife. As Vindici, Andy Curtiss does a splendid job of maintaining the pace of the show while offering a clear understanding of its language. Curtiss effortlessly bounced back and forth between a Southern-cowboy figure – his “disguise” around the Duke and his family – and his more stern actual nature, and the actor displayed nice touches of crazy and charm that matched his character well. Despite the show being about a heavy subject, Curtiss was still able to find moments of comedy, specifically when Vindici called for lightning against his enemies and wondered where it could be, asking if it is “being held up for heavier vengeance.” With its well-timed thunderclap, this made for a funny moment in a grim show, although Curtiss and Moody were able to find a lot of similarly light moments throughout the script.

Moody also did an excellent job of employing the entire QC Theatre Workshop space, and keeping the audience guessing where the action would be coming from next. Those aforementioned intro vignettes take place before the lights go down, and Vindici arrives well before the show starts, taking a seat in the audience from where he'll make his official entrance. Some of the scenes occurred in the aisles, and there was even one moment in which the lights came up on an aisle and illuminated a certain audience member – although I wasn't sure if he was meant to be part of the show or not. (I love when shows break the fourth wall, but unfortunately, because of the vast space the Prenzies are playing in here, there were a lot of darkened areas in which we lost the actors' faces due to there just not being enough lighting.) The most attention-grabbing scenes were those with Denise Yoder and Liz Terry, who play Vindici’s mother and sister. Both actresses made the language flow beautifully while adding levels of depth to their characters that really pulled me into the story. Drew Pastorek did a stand-up job as Vindici’s brother who is also a hand to the Duke, playing both sides of the fence. And I appreciated the costuming choice of Cait Bodenbender to give each family their own specific color. The Duke’s family all had some element of red in their costumes to depict “bad guys,” and Vindici’s family was represented with a “good guy” light teal.

In the end, everyone in The Revenger's Tragedy got their revenge, and also paid the price for that revenge. The Prenzies, meanwhile, delivered another bloody, tragic tale with a couple of surprises that again made me feel like part of the show.

The Revenger's Tragedy runs at the QC Theatre Workshop (1730 Wilkes Avenue, Davenport) through June 25, and more information and tickets are available by calling (563)484-4210 or visiting PrenziePlayers.com.