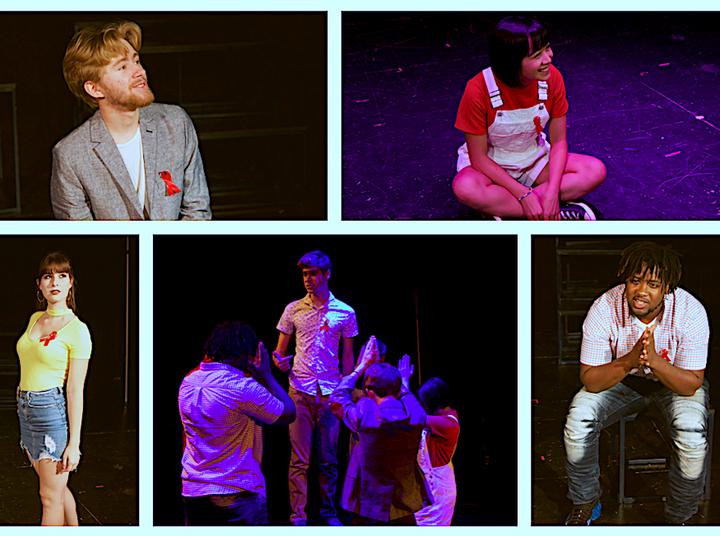 Deemed “a beautiful memorial” by Nebraska's The Reader and “an incredible achievement” by Vada magazine, the lauded collection of monologues and show tunes Elegies for Angels, Punks, & Raging Queens enjoys a one-weekend Augustana College staging September 27 through 30 – a deeply moving work that TheatrePizzazz.com called “an unforgettable evening of material real and raw, touching and joyous, and ultimately, celebratory.”

A dramatic song cycle with music by Janet Hood and lyrics and text by Bill Russell, Elegies for Angels, Punks, & Raging Queens features songs and monologues inspired by the NAMES Project AIDS Memorial Quilt and Edgar Lee Masters' Spoon River Anthology, the latter an iconic work that narrates the epitaphs of the residents of a fictional small town. Each of Elegies' monologues is written from the perspective of characters who've died from AIDS, and their songs – among them such heartbreakers as “I'm Holding on to You,” “And the Rain Keeps Falling Down,” and “Learning to Let Go” – represent the feelings of friends and family members dealing with loss. The piece was developed in the late 1980s and originally titled The Quilt, but first produced in 1989 at the Ohio Theatre in Soho, where its new title was adopted. Elegies has subsequently enjoyed runs in theatres in Ireland, London's West End, and throughout the United States, with its 2001 New York City performance featuring such Broadway greats as Alice Ripley, Brian d'Arcy James, and Christopher Durang.

Directing the production is Shelley Cooper, Augustana's assistant professor of theatre whose previous presentations have included The Drowsy Chaperone and the Mississippi Bend Players' Big River, and the cast features 21 Augustana students: Naomi Beckley, Elise Campbell, Levon Carothers, Javon Crayton, Alexis Downey, Drew Gilson, Meghan Gove, Virgil Hajdys, Noah Hill, Ryan Hurdle, Lauren Larson, Connor Maccabee, Muriel Mendoza, Cami Myers, Abby Overmann, Michelle Quinn, Abby Roselieb, Mary Sales, Kody Walker, Daniel Williams, and Brycen Witt. “I wanted to choose a piece of theatre that celebrates the diversity, inclusion and community that we strive for daily,” says Cooper. “I want this to be an opportunity to share stories that are often not heard or talked about. Hopefully, through our performance, you will take away that without a sense of caring, there can be no sense of community.”

Elegies for Angels, Punks, & Raging Queens runs at Augustana's Honkamp Myhre Black Box Theatre September 27 through 30, with performances at 7:30 p.m. Thursday through Saturday and 1:30 p.m. on Sunday. Admission is $5-7, and more information and tickets are available by calling (309)794-7306 or visiting Augustana.edu/tickets.