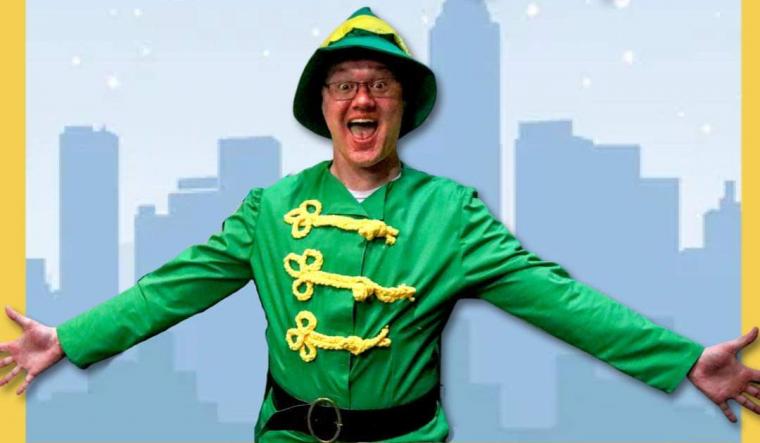 Lauded by the Chicago Tribune as “hilarious and heartwarming” and praised for its “bright comic zest” and “swinging music” by the New York Times, the stage adaptation Elf: The Musical – based on the 2003 screen comedy starring Will Ferrell – enjoys a November 30 through December 4 run at Moline's Prospect Park Auditorium, this Quad City Music Guild season-ender treating patrons to a holiday tale that Broadway World called an “upbeat, oddball, and tuneful concoction.”

A seasonal smash that ran on Broadway in the Christmas seasons of 2010–11 and 2012–13, Elf: The Musical centers on William “Buddy” Hobbs, a young orphan who mistakenly crawls into Santa Claus’ bag of gifts and is transported to the North Pole. The would-be elf is raised subsequently raised there, unaware that he is actually a human, until his enormous size and poor toy-making abilities cause him to face the truth. With Santa’s permission, Buddy embarks on a journey to New York City to find his birth father and discover his true identify. But when faced with the harsh realities that his father is on Santa's naughty list and his half-brother doesn’t even believe in the jolly old elf, Buddy is determined to win over his new family and help New York remember the true meaning of Christmas.

Quad City Music Guild's Elf: The Musical runs at Moline's Prospect Park Auditorium November 30 through December 4, with performances Wednesday through Saturday at 7:30 p.m. and Saturday and Sunday at 2 p.m. Admission is $11-16, and more information and tickets are available by calling (309)762-6610 and visiting QCMusicGuild.com.