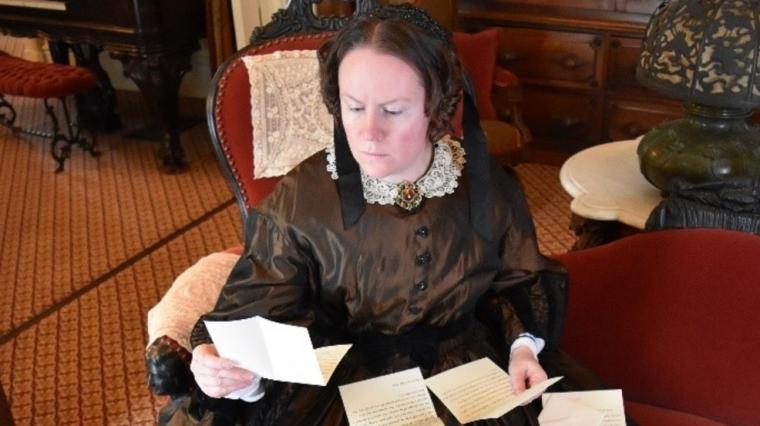 Hosted by the Bettendorf Public Library

Appearing in a special virtual presentation hosted by the Bettendorf Public Library, librarian and touring performer Laura F. Keyes, on August 26, delivers a historical portrayal of a famed suffragist in Elizabeth Cady Stanton, a celebration of the noted 19th-century feminist who fought for equal rights for women for more than 50 years.

A social activist, abolitionist, and leading figure of the early women's rights movement, Stanton was president of the National American Woman Suffrage Association from 1890 until 1892, and her 1848 Declaration of Sentiments is often credited with initiating the first organized suffrage movements in the United States. Unlike many of those involved in the women's-rights movement, however, Stanton addressed various issues pertaining to women beyond voting rights. Her concerns included women's parental and custody rights, property rights, employment and income rights, divorce, the economic health of the family, and birth control, and she was also an outspoken supporter of the 19th-century temperance movement.

After the Civil War, Stanton's commitment to female suffrage caused a schism in the women's-rights movement when she and Susan B. Anthony declined to support passage of the 14th and 15th Amendments to the United States Constitution, as she opposed giving added legal protection and voting rights to African American men while women, black and white alike, were denied those same rights. Her position on this issue, together with her thoughts on organized Christianity and women's issues beyond voting rights, led to the formation of two separate women's-rights organizations that were finally rejoined, with Stanton as president of the joint organization, about 20 years after her break from the original women's suffrage movement.

Cady's portrayer in Elizabeth Cady Stanton, Laura F. Keyes, is a librarian in northern Illinois who also performs one-woman historical pieces on such figures as Mary Todd Lincoln, Laura Ingalls Wilder, Mary Harlan Lincoln, and Irene Adler. An active community-theatre participant, Keyes' additional performance credits include the roles of Laura in The Glass Menagerie, Elizabeth in Frankenstein, Cecily in The Importance of Being Earnest, and Titania in A Midsummer Night's Dream.

Elizabeth Cady Stanton will be presented by the Bettendorf Public Library via GoToMeeting, and after registration, e-mails will be sent with the log-in information the day before the August 26 event. The online presentation is free, and more information is available by visiting BettendorfLibrary.com.