Elvis Has Entered the Boating: “All Shook Up,” at the Clinton Area Showboat Theatre through July 18 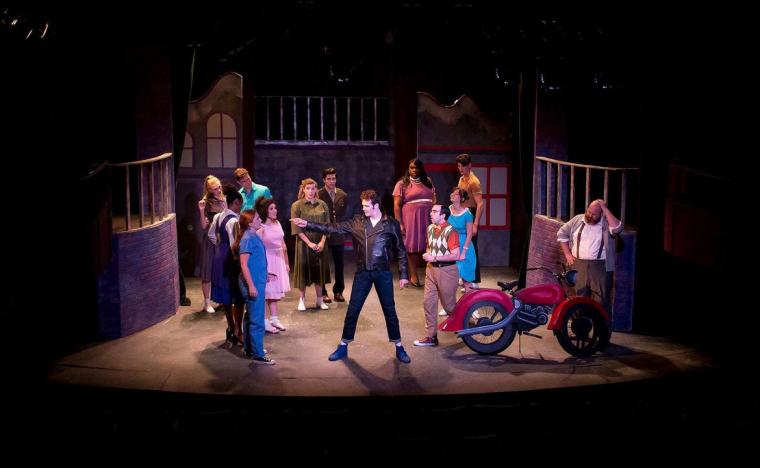 the All Shook Up ensemble

I was inside – bare-faced, cool, and enjoying the air conditioning – last Thursday for the opening performance of All Shook Up at the Clinton Area Showboat Theatre. The venue recently moved back indoors after temporarily holding their productions outside, across the street at the Riverview Bandshell. Initially, masks were required to go back inside, per the actors’ union, but the guidelines were changed on July 1 for indoor shows, and the mask mandate was lifted. It was good to be back on the boat, even though the outdoor stage was nice, too.

Directed by James Beaudry (with his associate Sarah Hinzman), and featuring the songs of Elvis Presley, this musical set in the 1950s begins with Chad (Ben Cherington) – a guitar-playing, hip-swiveling roustabout – gracing a town with his presence shortly after being released from prison. In need of a mechanic, he finds himself in the middle of multiple love triangles. And under the musical direction of Chase Anderson and Harrison Roth, Cherington and members of the ensemble, decked out in black jumpsuits and posing as prisoners, opened the show with an energetic rendition of “Jailhouse Rock.”

Cherington was very precise in his execution of Brigitte Ditmars' choreography, and although, at times, Cherington's dancing felt somewhat mechanical, his performance, as a whole, was stellar. Later in the first act, Chad rolls onto the stage riding an innovative-looking motorcycle, built around the frame of a bicycle, while singing the song that best describes his life, “Roustabout.” Tetta M. Askeland's motorcycle design was clever, and featured a red-and-silver overlay that encapsulated the bike. 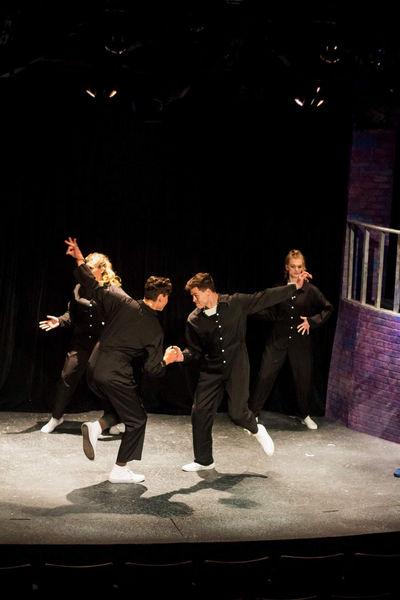 Meanwhile, Natalie (Kaela Dawn Massey), a local tomboy mechanic, fell in love with Chad as she serenaded him with “One Night with You.” When her affectionate advances were rejected by Chad, she transformed herself into “Ed,” a male counterpart who befriends Natalie's love interest in hopes that he can encourage some sort of relationship with her. Massey is cute and her chemistry with Cherington was palpable, which made for a great onstage connection.

Kris Lyons was phenomenal as Sylvia, the no-nonsense owner of Sylvia’s Honky-Tonk and the actress really does know how to belt out a tune. Her character is in a relationship with Jim (Phaul Fishman), who is Natalie’s widowed father, and in the second act, she does a wonderful job with her solo “There’s Always Me.” Likewise, Fishman has an excellent voice and blended well with Cherington in their “Don’t be Cruel” duet.

Sylvia’s daughter Lorraine is played by Savannah Cooper, and the performer wore a curly, black wig that did make the actress look younger – even though, in my opinion, that wig was kind of distracting. (Based on its sheer size and style itself, the wig looked big.) But Cooper has a set of pipes on her, as well, and All Shook Up had no shortage of great singers. I will say, however, that when the entire company sang together, it came across a bit loud and forced, almost like yelling. All of the vocals were strong, but they could have been softened up some in group numbers.

Grant Alexander Brown did an awesome job as Dennis, the awkward nerd who was also in love with Natalie. Brown’s costume (designed, as were the others, by Rebecca Rankin) consisted of a bow tie, glasses, and a loud pull-over vest that made his character even more convincing. At one point during the show, he also sported a hilarious Elmer Fudd hunting hat. 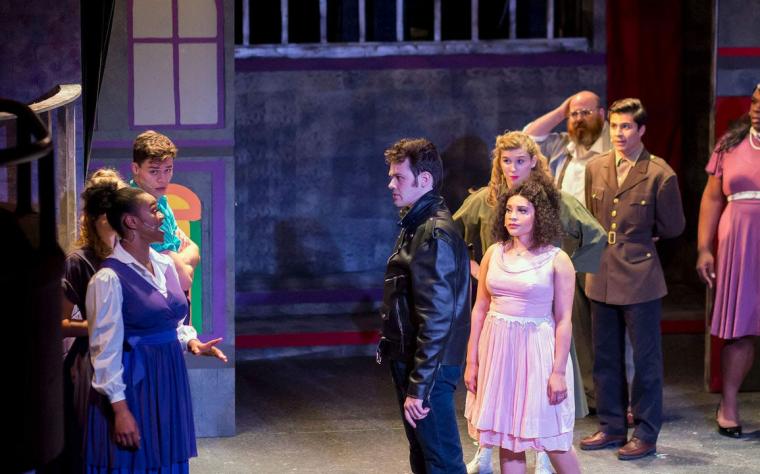 Je’Shaun Jackson played a female role (Henrietta), and I have to say, he was quite entertaining. Jackson is definitely a very versatile actor, and every time he was on stage, my eyes were drawn to him because of his subtle energy and confidence. As for the rest of the cast, everyone contributed to the overall success of the show by bringing their “A” game, and the audience was just as rambunctious as the performers; there was a lot of shouting and clapping throughout the evening.

As for the scenic design by Brian C. Seckfort, it consisted of balconies and business signs with lots of colors and flair. (When on the Showboat, I particularly like how the stage is set up to allow for actors to stand on each built-in, side balcony to add more visual interest to the entire production.) There were also see-through dividers that were used throughout the show that added extra dimension.

While I enjoyed the music and the choreography a lot, the show's plotting was a little weak and corny for me, reminding me of a bad, overly dramatic soap opera – but funny, too. And although I didn't laugh much, I did appreciate all the hard work that went into making the Clinton Area Showboat Theatre’s version of All Shook Up a success with the majority of its audience members. In fact, the production was given a roaring standing ovation at the conclusion, so I would say it was a hit.

All Shook Up runs at the Clinton Area Showboat Theatre (311 Riverview Dtive, Clinton IA) through July 18, and more information and tickets are available by calling (563)242-6760 or visiting ClintonShowboat.org.