“An Enemy of the People,” September 30 through October 9 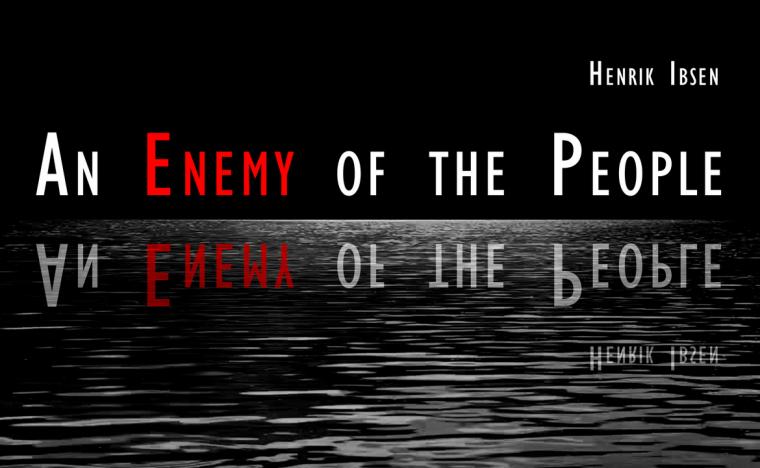 "An Enemy of the People" at the Mockingbird on Main -- September 30 through October 9.

An 1882 stage classic that the New York Times, in 2018, called “suddenly as timely as a tweet,” Henrik Ibsen's An Enemy of the People will be presented, in a modern-day re-imaging, at Davenport venue the Mockingbird of Main September 30 through October 9, its exploration of the impacts of pollution and moral complacency perhaps even more relevant now than it was in the 19th century.

In Ibsen's An Enemy of the People, a small town has just begun to amass fame and wealth through its medicinal spring waters. The community's resident physician Dr. Thomas Stockmann, however, discovers that the waters are, in fact, poisonous. On receiving proof of his theory, Stockmann immediately reports to his associates, but is shocked to find that instead of being thanked, he is looked upon as a dangerous crank motivated by a desire to prove that his fellow townspeople are wrong. With the community increasingly certain that Stockmann will bring them to run, employees of the local newspaper and the town mayor (who is also Stockmann's brother) do their utmost to urge secrecy and compromise, while the determined doctor begins to realize that the honesty and idealism he had counted on to make the truth prevail simply doesn't exist in the face of selfish “practical” interests.

With the New York Times adding that Ibsen's drama "seems endlessly adaptable to fit the political times,” the Mockingbird on Main's An Enemy of the People is being adapted by Alexander Richardson, whose original scripts (a work in progress) and Their Town were staged at the Playcrafters Barn Theatre in 2019 and 2020, respectively. Directing the production is area-theatre veteran Victoria House, whose local credits include the Prenzie Players' As You Like It, the Circa '21 Speakeasy's The Rocky Horror Show, and the Richmond Hill Barn Theatre's One Flew Over the Cuckoo's Nest. House's creative team includes producers Tristan Tapscott and Savannah Bay Strandin, stage manager Miles Potje, and designers Carolyn Krueger and Michael Mehuys. And featured in the Enemy of the People cast are Mischa Hooker (Genesius Guild's Measure for Measure), Doug Kutzli (the Circa '21 Dinner Playhouse's Grumpy Old Men: The Musical), Jo Vasquez (the Black Box Theatre's Silent Sky), Alisha Hanes (Playcrafters' The Piano Lesson), and Ian Heaton (Quad City Music Guild's Seussical), with the show's contributing vocal talents including Joshua Kahn, Alex Ryser, and Janos Horvath.

An Enemy of the People runs September 30 through October 9 in downtown Davenport, with performances Thursdays through Saturdays at 8 p.m. Admission is $15, and more information and tickets are available by visiting TheMockingbirdOnMain.com.