Radio Performance: “An Enemy of the People,” October 2 through 11 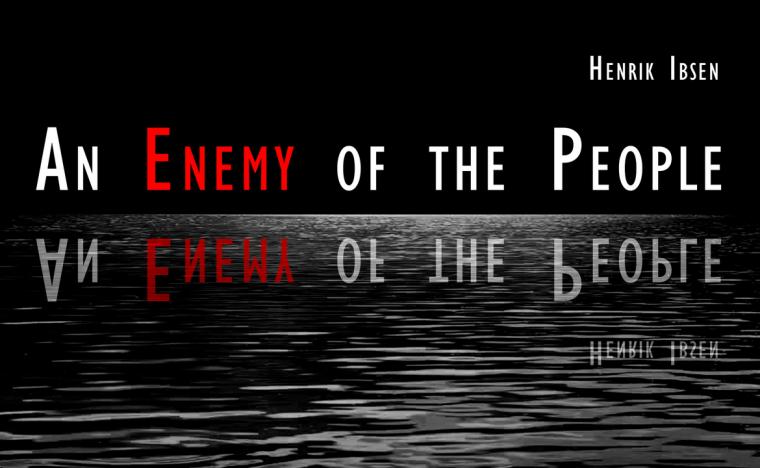 Radio Performance: “An Enemy of the People" -- October 2 through 11.

An 1882 stage classic that the New York Times, in 2018, called “suddenly as timely as a tweet,” Henrik Ibsen's An Enemy of the People (adapted by Tom Isbell) will be presented in radio-play format – and on radio station KALA 88.5 FM – by the St. Ambrose University theatre department October 2 through 11, its tale of a fight against injustice perhaps even more relevant now than it was in the 19th century.

In An Enemy of the People, a small Norwegian town has just begun to amass fame and wealth through its medicinal spring waters. The community's resident physician Dr. Thomas Stockmann, however, discovers that the waters are in fact poisonous. On receiving proof of his theory, Stockmann immediately reports to his associates, but is shocked to find that instead of being thanked, he is looked upon as a dangerous crank motivated by a desire to prove that his fellow townspeople are wrong. With the community increasingly certain that Stockmann will bring them to run, employees of the local newspaper do their utmost to urge secrecy and compromise, and the determined doctor begins to realize that the honesty and idealism he had counted on to make the truth prevail simply doesn't exist in the face of selfish “practical” interests.

With the New York Times adding that “the play seems endlessly adaptable to fit the political times,” St. Ambrose's Enemy of the People is being directed for its radio presentation by theatre professor Corinne Johnson, a performer in last fall's QC Theatre Workshop production of The Goat, or Who Is Sylvia? whose recent directing credits have included Tartuffe for her university and The Glass Menagerie, Brighton Beach Memoirs, and Biloxi Blues for the Mississippi Bend Players. Thomas Stockmann is portrayed by T.J. Green, whose area credits include roles in St. Ambrose's The Little Prince, Quad City Music Guild's Shrek: The Musical, and the Playcrafters Barn Theatre's Avenue Q. Completing the radio play's ensemble are Micah Dennis, Anthony Duckett, Nikki DeWitt, Tyler Hughes, Luke Peterson, Peyton Reese, and Quinnie Rodman; Kyle DeFauw, K. Hampton, Erika Seabloom, Elena Vellejo, and David Weaver serve as performance understudies; and the show's sound design and music will be provided by St. Ambrose alumnus and area playwright Aaron Randolph III.

An Enemy of the People will be broadcast on St. Ambrose radio station KALA 88.5 FM from October 2 through 11, with the prerecorded 90-minute performance airing at 7:30 p.m. on Fridays and Saturdays and 3 p.m. on Sundays. For more information on the radio performance, visit SAU.edu/theatre.