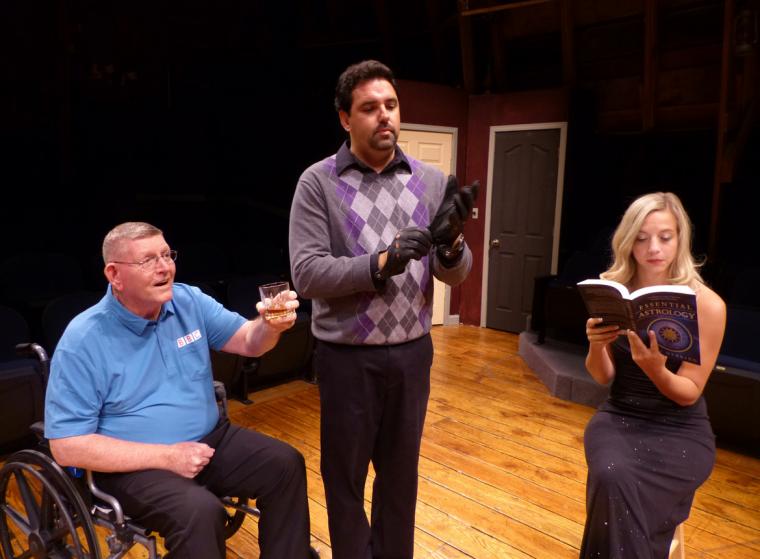 I love works that play with time, moving backward and forward through flashbacks and memories. I also love witty British mysteries. And I really love seeing works that succeed on the stage. So it was with high expectations that a friend and I went to see Friday’s production of Checkmate, Leslie Sands’ 1993 murder-mystery currently in production at the Richmond Hill Barn Theatre.

The script was a typical plot-driven device. Yet its storyline, filled with expected clues and reveals, was fairly interesting, especially in its manipulation of time, and I was very pleased that the ending had a completely unexpected plot twist, as well as a shocking surprise. However, several elements in this production resulted in it being a less-than-fully-satisfying experience overall.

Director Joseph R. DePauw was successful in several regards, most notably in helping actors create natural, realistic performances. I also agreed with his choices for subtle yet adequately believable British accents. However, my primary concern with his directorial choices was in the show's pacing – to my mind, a fundamental that affects everything else. And a key element of pacing is energy: Do the actors convey a vitality that, no matter what type of role they’re playing, creates audience interest and helps propel the action? Unfortunately, the energy of this entire production was flat, and even when actors did nice work in some of their more emotional scenes, it came off to me as somehow muted and lacking in impact. In addition, in a show that plays with time, very careful choices must be made to help the audience understand when and where the action is taking place. For the most part, DePauw managed this very well. There were, however, a couple of exceptions in this regard, most notably in its “interrogation” scene. My companion and I speculated about this for a good part of the drive home. We thought we understood what was going on, but when and where did the goings-on take place? Most importantly, why was the interrogator wearing a certain item of clothing, and where was the usual wearer of that item? And just what was the significance of that item anyway? These are not the “mysteries” that audience members should have to grapple with in Checkmate.

The play opens with British TV star Peter Conway (Nathan Johnson) coming upon the dead body of his wife Stella (Amanda Wilson) and his call to the police. Sergeant Drummond (Greg Bouljon) arrives on the scene, and through a series of flashbacks we learn of Conway’s relationships with Lori (Lindsay Schell), his young American lover, and his agent Richard (Jeff Blackwell), leading us to question whether this is a case of suicide or murder.

According to Richmond Hill's Web-site description, “Police Sgt. Drummond is properly star struck” with Conway. Had this been employed as a tactic, it could’ve created an interesting dynamic – the sergeant feigning admiration, and building up the actor’s ego (and perhaps loosening his tongue) while Drummond lets the audience in on what he's doing. That's not what happened, though, and while I liked Bouljon as he delivered a realistic, straightforward performance, I would’ve enjoyed him more had he not seemingly been directed to go for understated deliveries. Seeing Johnson on-stage was a first for me. And although I think he's a natural and look forward to his future performances, I felt he was also too low-key, which detracted from his believability as a driven, once-successful British actor entangled in an extra-marital affair, now down on his luck and with a dead wife on his hands. Yes, he did seem worried, but that was not enough. To my mind, an underlying desperation was called for, yet whatever desperation Johnson was trying to convey on Friday was diminished by his lack of intensity.

Wilson gave a very realistic performance as the cheated-on spouse who had to face the prospect of reduced circumstances. She was good at delivering variations and layers of emotional tones, and I liked her character. However, costumer Suzanne DeReu made a most unfortunate choice in Stella’s nightgown, as this London theatre wife who, we'd been told, loved to spend money entered one scene in a dowdy, knee-length cotton duster. Why not a glamorously theatrical (if well-worn) dressing gown? On the other hand, DeReu’s pick of a little black dress – one stunningly worn by Schell in her TV-studio scene with Johnson – was a fabulous choice.

Hopefully, Friday’s performance was an off-night, and future productions will have an infusion of energy and joy. If the actors could just be encouraged to give it some punch and have some fun, I think audiences will have a much better time as well.

Checkmate runs at the Richmond Hill Barn Theatre (600 Robinson Drive, Geneseo) through July 17, and more information and tickets are available by calling (309)944-2244 or visiting RHPlayers.com.